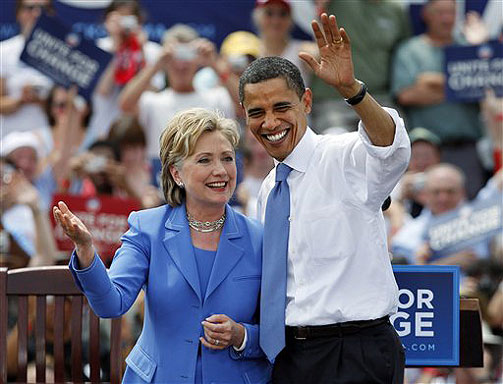 In the increasingly divisive Democratic primary between Hillary Clinton and Bernie Sanders, it's getting harder to imagine the two factions disarming after the final primary, in order to link arms and march into the general election together. Indeed, Sanders and his supporters seem to be ramping up against Clinton, even as primary season winds down.

So, is this really any more contentious than the 2008 primary between Clinton and then-Sen. Barack Obama?

That year's contest had its rough moments -- like the time when then-Sen. Obama said dismissively of Clinton, "You're likable enough, Hillary" during a debate. He also repeatedly slammed her decision in the Senate to vote to authorize the Iraq war. Clinton landed some blows, too, though, criticizing Mr. Obama for not leaving the Chicago church where Rev. Jeremiah A. Wright Jr. made his inflammatory remarks .

But that tumultuous race ultimately came to a close in early June. That's when Clinton announced her decision to drop out a few days after the final contests, which helped Obama secure enough delegates to formally win the nomination. A few months earlier, key Democrats had already been pressuring her to exit, even though the race was much closer than it is today.

At roughly this point in time in 2008, Obama led Clinton by less than 200 delegates -- including super delegates. Right now, Clinton leads Sanders by 771 delegates, including superdelegates (and by almost 300 pledged delegates).

Sanders has maintained for months that he plans to go all the way to the convention in Philadelphia this July, even though he's consistently lagged Clinton in the delegate count. Clinton, however, has done the math and feels sure about how it'll turn out.

"I will be the nominee for my party," the former secretary of State said in an interview on CNN Thursday. "That is already done, in effect. There is no way that I won't be."

Sanders' campaign spokesman, Michael Briggs, shot back, "In the past three weeks voters in Indiana, West Virginia and Oregon respectfully disagreed with Secretary Clinton. We expect voters in the remaining eight contests will also disagree."

In her 2008 farewell speech, Clinton gave Obama a full-throated endorsement in an attempt to unify the party. Even though many Clinton supporters said at the time that they'd be unwilling to vote for Obama in a general election, Clinton worked hard to bring her supporters into the fold.

"Today, as I suspend my campaign, I congratulate him on the victory he has won and the extraordinary race he has run. I endorse him, and throw my full support behind him. And I ask all of you to join me in working as hard for Barack Obama as you have for me," she said at the time.

Now, eight years later, there is some concern that it won't be that easy to come together this time around.

Top Democrats -- Vice President Joe Biden, Senate Minority Leader Harry Reid and Democratic National Committee Chairwoman Debbie Wasserman Schultz -- publicly criticized Sanders this week for what was perceived as a somewhat tepid criticism of the behavior of a number of his supporters at the Nevada Democratic party's convention last weekend.

"I condemn any and all forms of violence, including the personal harassment of individuals," Sanders said in a statement, but then went to accuse Democratic leaders of using their power "to prevent a fair and transparent process from taking place."

Biden called on Sanders "to be more aggressive in speaking out," although he also said he's not concerned about the rift deepening among Democratic voters.

"I'm confident that Bernie will be supportive if Hillary wins, which the numbers indicate will happen. So I'm not worried. There's no fundamental split in the Democratic Party," said Biden, who also said earlier this month that he's confident Clinton will not only win the nomination, but also the presidency.

Nearly 60 percent of Democratic voters say they think that the long nomination contest will help the eventual nominee, a CBS News/New York Times poll released Thursday evening found. Just over a third said it will hurt. That's quite a reversal from 2008, however, when more than half of Democratic voters said it would hurt their nominee. The latest survey found a majority of Democrats want Clinton to win the nomination and a whopping 83 percent expect her to clinch it.

While 2016 might seem divisive, Paul Begala, a Democratic strategist who's been an ally of the Clintons for decades and who was Bill Clinton's chief strategist for the 1992 campaign, recalls that the 2008 Democratic primary was nastier overall: both Clinton and Obama ran numerous negative ads and were more openly contentious in the early stages of the primary.

But one difference Begala noted -- by this point in the race both Obama and Clinton had virtually stopped attacking each other and had turned their attention to the Republicans. At least for Sanders, that's not true this time around.

"This was in a race where Obama never led by more than 120 pledged delegates. Hillary leads by 300 pledged delegates," he said. "And yet the two of them -- they called a truce -- they spent the rest of the campaign talking about the Republicans and getting voters registered."

Sanders and Clinton have just over a handful of primaries left, with the final bunch just weeks away on June 7, including a critical one in California where 475 delegates are at stake. Though the finale is approaching, there's been no reconciliation between the campaigns, and the situation at the Nevada state convention has only seemed to worsen the relationship between the Sanders campaign and party leaders.

Their exchanges have been ugly over the last few months. In early April, Sanders questioned her eligibility to be commander-in-chief.

"I don't believe that she is qualified," Sanders said to a cheering crowd of more than 9,000 people in Philadelphia.

Their campaigns also engaged in a passive-aggressive back-and-forth about setting an additional Democratic debate ahead of New York's primary. At their debate in Brooklyn, Sanders supporters booed Clinton.

President Obama was asked whether it's time for Sanders to drop out at a recent press conference at the White House, and he acknowledged that "everyone starts getting a little chippy" during a primary race.

"Let's let the process play itself out," he said. "You mentioned the delegate math. I think everybody knows what that math is. I think Senator Sanders has done an extraordinary job raising a whole range of issues that are important to Democratic voters as well as the American people, generally. And I know that at some point there's going to be a conversation between Secretary Clinton and Bernie Sanders about how we move towards the convention."