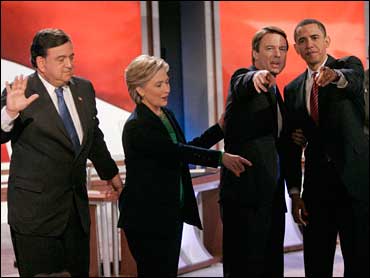 "I have been entirely consistent in my position," responded Obama, adding that he and Clinton have a "philosophical disagreement" over her proposal to require Americans to purchase health insurance or face a penalty from the government.

CBSNews.com senior political editor Vaughn Ververs called the debate "possibly the penultimate moment" in the campaign. "Twelve months of indirect arguments over change burst into a two-on one, sometimes personal exchange between the three leading candidates. Clinton needs a win in New Hampshire and tonight's exchange demonstrated that in stark terms."

"I think we should get into examining everybody's record," she said.

Obama's candidacy has soared on his pledge to bring change to Washington, and Clinton sought to blunt his advantage. "I think we're all advocating change," she said.

Edwards, second-place finisher in Iowa, worked throughout the debate to align himself with Obama as an advocate for change in Washington, and described Clinton as a defender of the status quo. "Every time he speaks out for change, every time I fight for change, the forces of status quo are going to attack," Edwards said.

"I didn't hear these kind of attacks from Sen. Clinton when she was ahead," he said. "Now that she's not, we hear them."

There were a few moments of humor.

"I've been in hostage negotiations that are a lot more civil than this," Richardson, a one-time diplomat, said at one point.

Asked what she could say to voters who don't find her likable enough, and seem to like Obama more, Clinton drew laughter. "Well, that hurts my feelings. ... But I'll try to go on."

She said she agreed that Obama was likable, then added, "I don't think I'm that bad."

That drew a wry response from Obama, who said, "You're likable enough, Hillary."

But with the first primary only three days away, Clinton had little time to made the case she hoped would knock Obama off stride.

Challenged on health care, Obama acknowledged that he has said if he were designing a system from scratch, he would set up a single-payer system that would give coverage to all. He said that is impractical, given the current system in which so many people receive their insurance from employers.

Obama's health care plan relies on government financial incentives and cost-cutting to help the uninsured afford coverage. But unlike Clinton and Edwards, he does not require adults to buy coverage or pay a penalty if they fail.

"I disagree with that because as I go around, I don't meet people who avoid getting health care. The problem is they can't afford it," he said.

The opening moments of the debate produced agreement on Obama's summertime statement, controversial at the time, that he would take action against terrorist leader Osama bin Laden if he had actionable intelligence that he was hiding in Pakistan and the government there did not act.

"As much as possible," the United States should seek agreement from Pakistanis, Obama added.

Edwards agreed. "If I as president of the United States know where Osama bin Laden is I would go get him," the 2004 Democratic vice presidential nominee said.

Likewise, New Mexico Gov. Bill Richardson said that if diplomacy failed and the Pakistani government was incapable of moving against the terrorist leader, "then you do take that action."

Clinton agreed, saying, "At some point, probably when the missiles have been launched, the Pakistani government has to know they are on the way." She said that was important to make sure Pakistan didn't jump to the conclusion that it was under attack from India, its longtime rival in southwest Asia.

Edwards hinted he would welcome a second-place finish to Obama, which advisers said they hoped would turn the contest into a two-man race and take Clinton out of the game. Edwards narrowly edged Clinton for second place in Iowa, which he couched as an upset that he would be happy to replicate here.

What happened Thursday in the Iowa caucus "is going to happen here in New Hampshire," Edwards told an overflow crowd at Lebanon High School auditorium. Even though he effectively acknowledged he wouldn't win the state, he was relaxed and playful, shucking his suit jacket after the speech and shooting hoops with his shirt tail hanging out while the crowd applauded.

The heightened campaign activity came as the candidates gathered for the debate Saturday night. Clinton and Edwards hope to stop Obama, the victor in Iowa, from capturing the first-in-the-nation primary, which would only add to his momentum as he pursues the nomination.

Richardson, who finished a distant fourth in Iowa and got just 4 percent in the poll, also participated. The survey conducted Jan. 4-5 had a margin of error of 5 percentage points.

Mark Penn, Clinton's chief strategist and pollster, touted the poll as good news in a blog post. He pointed out that after John Kerry and Al Gore won the Iowa caucuses, they saw bigger jumps than Obama, who was at 30 points in a CNN poll of New Hampshire voters taken at the end of December.

The debate was sponsored by ABC News and Facebook.