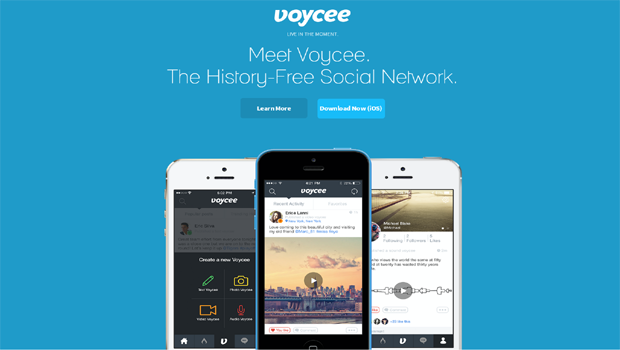 It's kind of like Facebook -- with amnesia. Voycee, a New York-based start-up, is a mobile-only social network where previous posts vanish without a trace each time a user shares a new status update or posts new content.

Voycee is the latest in a series of apps seeking to capitalize on users' desire for privacy and secrecy.

Launching just four weeks ago, Voycee is currently available as an iPhone app, with Android and web versions coming soon, according to the company's website. "Be history-free," it promises. "The 'you' of today, not yesterday, not last year."

By eliminating histories and focusing on the "here and now," it makes the social media experience more like having a conversation and less like a network. The term "voycee" refers to what the company calls a user's "digital voice."

Voycee has typical features of a social network, such as sharing status updates, photos, videos and following other users. But unlike mainstream social media networks, Voycee users have the freedom of expressing themselves without the baggage that comes with your entire digital history being on display.

Whenever users update their profile, their previous status disappears -- not just from the app, but from the company's servers, completely and permanently, Voycee says. Privacy is a key selling point for the company.

"As we are growing on other platforms and currently enhancing the current app, we are also investing heavily on the back-end infrastructure to make this as safe as possible," founder Ilfan Radoncic told CBS News in an email. Collecting only the user's email, address and password, he stressed that the less information the company knows, the better.

"As a history-free social network...we've made sure that no previous posts are kept on the network or the servers and are completely erased which is our most important security feature," he explained. "So, if somehow our network gets hacked, we want to make sure that data is not available."

Until now, "we were made to believe that saving all your previous posts was a norm, which certainly is not," Radoncic noted. It may be a bit of an adjustment for users who are used to their activities being constantly available online in the form of retweets, likes, comments and mentions.

The use of so-called "anonymous" and "ephemeral" social networks has been on the rise. Secret, which launched earlier this year, allows users to post secrets -- which are delivered anonymously. Users can express themselves and share without fear of judgment. Secret just announced a new feature -- Secret Dens -- which allows people to anonymously share messages within a circle of coworkers or classmates.

Secret does not offer usernames or profile photos to anonymize all content and ensure that posts can't be traced back to a single user. While Secret is hosted on Google's servers, it assures that once users delete their accounts, their Secret data will be deleted after 30 days. However, the app's privacy policy says it may take longer for the information to be deleted on Google's servers.

But Secret and several other secret-identity apps have also come under fire from parents and school officials who say they can be used to bully students anonymously.

Other apps like Confide, Ansa and Wickr all tout their ephemeral capabilities and high-tech encryption as a reason users should abandon mainstream social media sites, such as Facebook and Instagram. Wickr, which uses "military-grade encryption," relies on peer-to-peer encryption -- making it increasingly difficult to crack the code and recover the data, according to its website. Confide disables the ability to take screen-shots of its messages. Ansa lets users delete text messages after they're sent -- from their own phone and the recipient's.

However, depending on the app and security protocols that a particular app uses, data may not be fully erased. Snapchat, the instant messenger known for vanishing photos, settled last month with the Federal Trade Commission over claims that the company had misled its users about its data collection methods, as well as failing to tell them that others could save their messages without their knowledge.

Larger corporations, like Apple, have noticed the rise in popularity of ephemeral messaging -- even adding similar features to its own products. In iOS 8, iMessage users can send time-sensitive messages, which will expire and be deleted from the phone after a few minutes, reports CNET.

Despite the best of intentions, Voycee realizes that its social network is not impenetrable. In its privacy policy, the company warns that although it uses commercially reasonable physical, managerial, and technical safeguards to preserve the security of its users' personal information, the transmission of "information via the internet and mobile platforms is not completely secure."

A new company, Voycee is eager to try and improve. It already has plans to improve its app, according to Radoncic.

"Currently we are working on functionality enhancements and have started on the Web and Android version," he told CBS News. "We want to make sure that we get our functionality working as closely to perfect as possible, because once our users start using our service they are expecting us to match the service and speed as the big social networks provide."