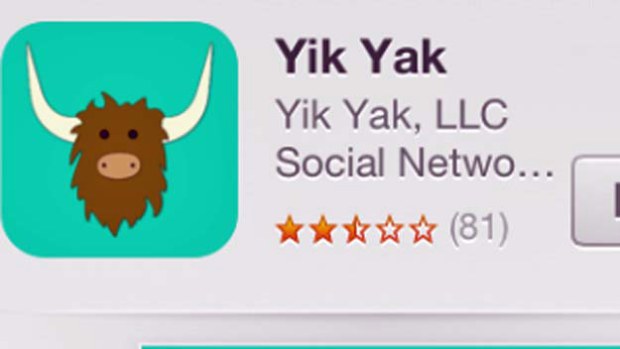 High schools parents and students are being warned about the dangers of using a social media app called "Yik Yak."

The app, which can best be described as a cross between Twitter and Snapchat, allows students to post anonymous comments to other users within a 5-to-10-mile radius. Introduced a few months ago as the "anonymous social wall for anything and everything," it has quickly gone the way of Ask.fm and Kik -- becoming used by teenagers to cyberbully their peers.
High schools across the country have been cautioning parents and banning the use of the app on their networks. However, students are still able to access the app by turning off their Wi-Fi and using their cell service.
MyFoxChicago reported that letters were sent home to parents. Lake Forest High School was "working with our legal counsel and the local authorities to see what recourse we have against individuals who have posted items that are harmful to individuals and disruptive to our school setting," according to MyFoxChicago.
Amid cyberbullying worries, Yik Yak's co-founder told the Chicago Tribune that the company was disabling the app in the Chicago area and will try to prevent it from being used on high school or middle school campuses.
"The app was made for users college-age and above," Brooks Buffington said in an email to the Tribune, referring to the age requirement that users must be 17 years old to download the app.
A high school in Massachusetts was also affected, after being evacuated twice on Tuesday after someone posted threats on the social media app, according to CBS Boston.
Marblehead police are currently working with local police in Mobile, Ala., where a similar case was reported. Yik Yak helped the Mobile police find the users responsible, showing that for an app that touted itself to be anonymous, it wasn't so anonymous after all.
Ashley Rains, a public affairs officer in the Mobile Police Department, told CBS Boston that parents really need to be aware of the app.
"If you want your child to use it, make sure you know what they're reading and what they're posting because this app can really be taken too far," Rains told CBS Boston. "Just immature juveniles that think they are playing a prank."
View CBS News In
CBS News App Open
Chrome Safari Continue
Be the first to know
Get browser notifications for breaking news, live events, and exclusive reporting.