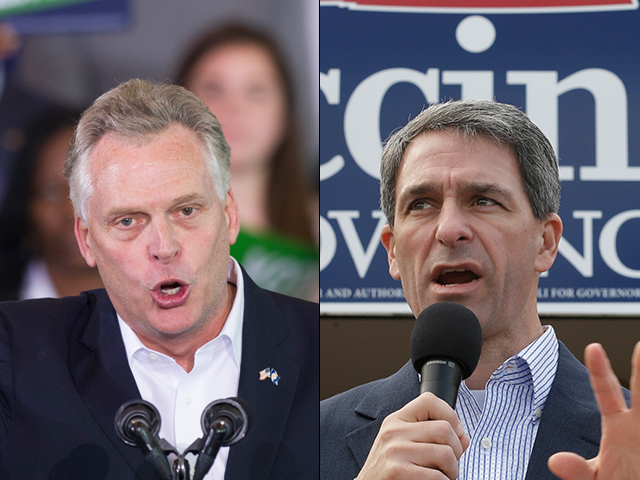 In the highest-profile elections Tuesday, voters in Virginia and New Jersey head to the polls to choose a governor and each contest has a much different level of drama.

In Virginia, Election Day promises to bring an end to the bitter, contentious contest that seems to have left voters dissatisfied with their choices. In New Jersey, the reelection of Republican Gov. Chris Christie has been a nearly forgone conclusion leaving the race void of any real fireworks.

If Democrat Terry McAuliffe manages to hold his small but consistent lead over Republican Attorney General Ken Cuccinelli in the Virginia gubernatorial race, and Christie wins the New Jersey race as expected, it will be the first time since 1985 that the two states have chosen governors from different parties.

The Virginia race in particular has been a nasty contest marked mostly by personal attacks flung back and forth during the course of the campaign. Cuccinelli has charged McAuliffe with running a dishonest, unserious campaign; McAuliffe has attempted to paint Cuccinelli, a tea party favorite, as a far-right extremist out to end access to abortions and contraception. Even on policy issues, the fact-checking website Politifact said that both candidates "fared miserably on the Truth-O-Meter this fall."

Indeed, things got so bad that two of the state's major papers - the Richmond Times-Dispatch and the Roanoke Times declined to endorse either candidate this year for the first time in recent memory.

"The major-party candidates have earned the citizenry's derision. The third-party alternative has run a more exemplary race yet does not qualify as a suitable option. We cannot in good conscience endorse a candidate for governor," said the Times-Dispatch.

With Virginia the only competitive race in sight, both candidates have drawn no shortage of star power from their respective parties. Cuccinelli campaigned with Sens. Rand Paul, R-Ky., Marco Rubio, R-Fla., Wisconsin Gov. Scott Walker and former Republican presidential candidate Ron Paul. McAuliffe, for his part, got help from both Bill and Hillary Clinton and closed out the campaign with appearances from President Obama andVice President Joe Biden.

The final days of the campaign have served in part as a microcosm of the battles between President Obama and the GOP. Cuccinelli and his supporters have said that Virginia is the next "battlefield" in their fight against the Affordable Care Act, and both Biden and Obama warned that Cuccinelli will adhere to the no-compromise politics that led to the recent government shutdown, which had an outsized effect on Virginia's substantial federal workforce.

Still, McAuliffe has held a small but steady lead in the polls in recent weeks, bolstered in part by the fact that he was able to tap into his deep network of sources he cultivated during his years as a Democratic fundraiser. He pummeled Cuccinelli in the money race, raising $34.4 million to Cuccinelli's $19.7, according to the nonpartisan Virginia Public Access Project.

The most recent Quinnipiac poll out Monday showed McAuliffe leading Cuccinelli with a 46 to 40 percent lead, a smaller margin than a survey from Oct. 23 in which he was up 46 to 39 percent but up from an Oct. 30 poll that had him up only by 4.

Despite McAuliffe's persistent lead, there is a very slight chance that the race could be upended if Democratic turnout is extremely low. Turnout is always lower in off-year elections where there is no presidential race to draw voters, which is part of the reason that Mr. Obama, Biden and Clinton have gone to such lengths to remind Democrats to keep their turnout high.

New Jersey is a far different story. There have been hardly any surrogates to drop into that race, with Democrats in particular finding their time more valuably spent in Virginia. Christie is a popular governor despite New Jersey's blue leanings, and his challenger, state Sen. Barbara Buono, was unable to overcome his high profile.

The day before voters went to the polls, the Quinnipiac polling institute showed Christie with the same two-to-one margin lead over Buono that he has held for months. The poll put his lead at 61 to 33 percent among likely voters, including 64 to 29 percent lead among independents and 30 percent among Democrats.

The outcome of the two races could offer clues about the future of the Republican Party. While Cuccinelli has stuck faithfully to deeply conservative politics, Christie has been more of an enigma. He was criticized by some Republicans for appearing with President Obama in the wake of Hurricane Sandy, and last month he decided to drop an appeal of the state Supreme Court's decision to allow same-sex marriages.