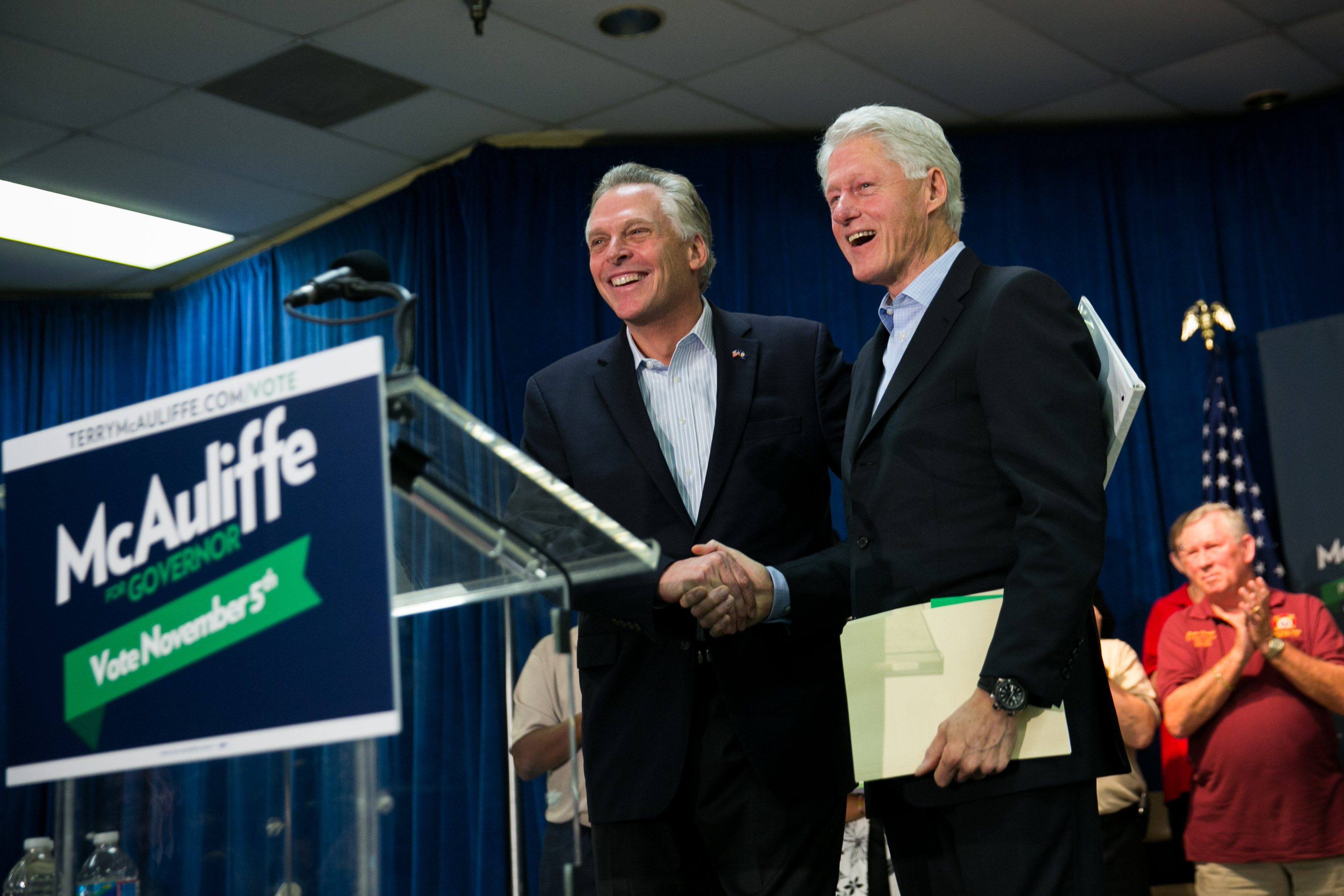 Former President Bill Clinton warned Virginia voters Sunday that they must match the enthusiasm that conservative ideologues will show on election day and turn out to support Democrat Terry McAuliffe in the Nov. 5 election.

With little more than a week before Election Day, McAuliffe and Republican Ken Cuccinelli each have sought to energize their strongest supporters. McAuliffe has opened a lead in polling and is heavily outspending Cuccinelli on television ads, but turnout is expected to be low and the result could be decided by a few thousand votes.

"Political extremism does have one political virtue," Clinton said. "Once you get people all torn up and upset, steam coming out of their ears, people will show up and vote."

It was a shift in roles. For decades, it has been McAuliffe championing the personal and political futures of Bill Clinton and, later, his wife, Hillary Rodham Clinton. Now, he's here to pitch in during the campaign against Republican Ken Cuccinelli during its final week even though Clinton joked he is "in my dotage."

"Terry's gotten so good on the stump, I don't think he needs me anymore," Clinton said to laughter at the pair's first stop.

He predicted that Cuccinelli's supporters, who are deeply conservative and align to the tea party, would be reliable, and he urged Democrats to be just as motivated.

"Just remember, the people who aren't here today, who go to the other fella's rally, they will be there on Election Day," he said. "I've dealt with it all my life."

The Clinton family has shown no shortage of support for McAuliffe's candidacy in the closing weeks of the election. Hillary Clinton's first major political move wasto endorse McAuliffe, and she has also attended fundraisers to help his candidacy.

The Clintons have long been friends with McAuliffe, who served as finance chairman of Bill Clinton's 1996 presidential race and chairman of Hillary Clinton's 2008 primary campaign.

Cuccinelli's campaign sought to turn Clinton's star power among Democrats into another way to build enthusiasm among his conservative supporters. Even before the pair arrived at the veterans' hall here in northern Virginia, Cuccinelli's campaign had already sent reporters a memo recounting the years of Clinton-McAuliffe collaboration for Democrats.

"As Terry McAuliffe spends the next few days traveling the state with Bill Clinton, Virginia voters should remember the troublesome space McAuliffe occupied as the middleman between the dangerous intersection of big-dollar special interest donors and high-ranking elected officials," the memo said. "The Commonwealth of Virginia neither needs nor deserves the McAuliffe-Clinton baggage."

What Republicans called "baggage" - questions over the Clintons' finances, Bill Clinton's affair with a White House intern and his subsequent impeachment - seems to have faded for many voters. Bill Clinton's approval ratings have improved since he left the White House in 2001 and voters have not lost interest in Hillary Rodham Clinton since she stepped down as President Barack Obama's top diplomat earlier this year.

Clinton made only one passing mention of his wife, nothing that he was holding up a signup sheet to show voters because "Hillary did it" when she appeared with McAuliffe.

Every step Hillary Rodham Clinton has taken since leaving the State Department has been examined for its 2016 implications. And Bill Clinton's return to full-time campaigning - even if for only a few days - was sure to add to speculation about whether a Clinton could call the White House home again in 2017.

Democrats have been relentless in painting Cuccinelli - who is known outside the state best as the first to challenge President Barack Obama's health care law - as a political ideologue and not someone who is unwilling to compromise.

Clinton happily added his voice to that message.

"If we become ideological, then we're blind to evidence. We can only hear people who already agree with us. We think we know everything right now, and we have nothing to learn from anybody," said Clinton, who as president sometimes bucked his party and worked with Republicans.

Clinton predicted that Cuccinelli as governor would impose his own deeply conservative views on the state at a time when compromise should be employed to build the economy.