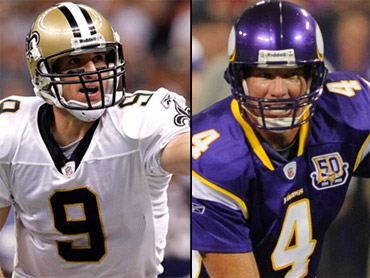 The Saints' first Super Bowl title was so big in New Orleans that Mardi Gras, a revered local institution dating back well more than a century, became popularly known as, "Lombardi Gras."

New Orleans' momentous victory over the Indianapolis Colts occurred in the middle of the city's parade season, so the Saints' celebratory ride through town with the Vince Lombardi Trophy was simply added to the lineup. In the following days, players, coaches, team officials and the trophy made appearances in traditional parades as well.

And while Mardi Gras ended way back on Ash Wednesday, it seems as though Lombardi Gras still isn't over quite yet — certainly not by the looks of the French Quarter, where a massive concert stage has been built on the river front, overlooking historic Jackson Square.

In the hours before the defending champs kick off the NFL season against the Minnesota Vikings on Thursday night in the Louisiana Superdome, the Big Easy will host a concert featuring Dave Matthews and Taylor Swift, an NFL-sponsored parade and a citywide bash for which a number of schools and businesses have already decided to shut down.

"It's like the Super Bowl all over again," Saints running back Reggie Bush said.

Indeed, Saints owner Tom Benson will show off the Lombardi Trophy once more at a newly completed festival plaza next to the Superdome that has been named Champions Square. Then the festivities move inside the dome, where those with the hottest ticket in town will witness the raising of a 2009 championship banner before kickoff.

The Vikings would like to see the party end right about there, and they have their reasons for believing they can make that happen.

Minnesota outperformed the Saints in numerous statistical categories when they met in last season's NFC championship game and might have won if not for five turnovers.

The Vikings outgained the Saints 165 yards to 68 on the ground and 310 yards to 189 in the air. In the end, Minnesota was done in by three lost fumbles and two interceptions, the last by Saints cornerback Tracy Porter when the Vikings were threatening to take a late-game lead.

"They took us to the brink of destruction," Saints safety Roman Harper recalled. "If it wasn't for another Tracy Porter pick, who knows where we would be. ... It was a great game last year and should be a great game this year."

There is one considerable difference, however, as Minnesota coach Brad Childress was quick to point out. When this game ends, both teams get to keep playing.

That hasn't diminished interest in a game that also features the return of Brett Favre, who'll start his 20th season despite offseason left ankle surgery that had him mulling what would have been his third retirement. Instead, he reported to the Vikings halfway through the preseason.

"I feel pretty good," Favre said. "People continue to say, 'Can he hold up the whole year?' You can say that about any quarterback that plays the game. It seems like at age 40, and soon to be 41, that I am the easy target to pick on ... yet I continue to outlast all these guys."

Favre performed brilliantly in the NFC title game despite taking a pounding from a Saints defense that drew a few flags — and fines — for some of the heavy hits they delivered.

Childress and some of Favre's teammates have since suggested that the Saints appeared to be trying to hurt their quarterback, although Favre said this week he had no complaints.

The Saints say so-called "remember me" hits are part of an aggressive style taught by defensive coordinator Gregg Williams, and that they play the same way every game.

With the chatter that has gone back and forth, Saints quarterback Drew Brees figures the Vikings may be looking for a little payback. Certainly, it wouldn't hurt Minnesota's cause to knock the reigning Super Bowl MVP — who completed an NFL record 70.62 percent of his passes last season — out of the game.

"If you play defense in this league, you love to take a shot at the quarterback — a legal, clean shot — albeit you hit him as hard as you can," Brees said. "We've been pretty good in regards to protecting the quarterback, trying to get it out and to avoid sacks and all those things. ... Obviously, I know they're going to be coming after me, and that's fine."

The Saints' offense led the NFL in total yards (403.8 per game) and has all of its key players back.

The biggest changes for New Orleans came on defense, where there will be three new starters, including Malcolm Jenkins at free safety while All-Pro Darren Sharper continues his rehabilitation from offseason knee surgery.

Minnesota's offense will be without injured receiver Sidney Rice, while running back Chester Taylor left for Chicago in the offseason.

Still, receiver Percy Harvin — also a threat in the running game — will be lining up all over the field, and the Saints still have to figure out how to stop Adrian Peterson. Peterson rushed for 122 yards and three TDs against New Orleans last year and who is eager to prove he's overcome his past fumbling problems.