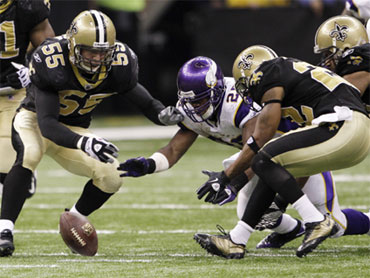 They sure ain't the Aints anymore.

The New Orleans Saints are heading to their first Super Bowl after battering Brett Favre and beating the Minnesota Vikings 31-28 in overtime Sunday on unheralded Garrett Hartley's 40-yard field goal.

Favre threw away Minnesota's best chance to win, tossing an interception deep in New Orleans territory in the closing seconds of regulation. Then the Saints won the coin toss and soon it was over.

The team that had no home five years ago after Hurricane Katrina ravaged its city and the Superdome overcame a slew of mistakes in the biggest game the Big Easy has ever seen.

"This is for everybody in this city," said coach Sean Payton, the architect of the Saints' turnaround. "This stadium used to have holes in it and used to be wet. It's not wet anymore. This is for the city of New Orleans."

Forget the paper bag masks and that long history of losing that started in 1967. Moments after Hartley's kick, they were toasting their hometown winners on Bourbon Street.

And in the Superdome, once a squalid refuge after Katrina, they boogied in the aisles as confetti covered the field.

"It's a moment I've been waiting for for a long time and obviously we're not done yet," said Drew Brees, Payton's hand-picked quarterback for the Saints' renaissance.

The Saints (15-3) will meet Peyton Manning and the Indianapolis Colts (16-2) in the Super Bowl in two weeks in Miami. The Colts opened as four-point favorites.

It's the first time the top seeds in each conference made the big game since the 1993 season.

"Brett prepared us, but now we've got another challenge in Peyton," safety Darren Sharper said.

There were nine fumbles and two interceptions, and the biggest mistake belonged to Favre. Flushed from the pocket in the final minute, he seemed to have room to run to set up a field goal. But hampered by a left leg injured in the third quarter, the 40-year-old quarterback threw cross-field and was intercepted by Tracy Porter at the 22.

That finished off Minnesota's chance for its first Super Bowl trip in 33 years — and opportunity to win it for the first time after four defeats.

New Orleans won the coin toss, Brees guided it to the Minnesota 22 after converting a fourth-and-1 on Pierre Thomas' leap over the line, and Hartley — suspended at the start of the season for using a banned stimulant — split the uprights 4:45 into OT.

"Just helping my team get to Miami," Hartley said. "Just doing my part."

It was anything but easy for the Saints, in only their second conference championship game; they lost at Chicago three years ago.

They had to withstand yet one more comeback by Favre, who returned to the NFL with the Vikings (13-5) after another brief retirement. He was alternately spectacular and pedestrian Sunday, finally betrayed by his gambling style and, perhaps, an aging body.

Porter's pick sent it into overtime, the third time an NFC title game has needed extra time and the second in three seasons. Two years ago, Favre's interception in OT set up a field goal that sent the Giants past the Packers and into the Super Bowl.

The Saints can only hope they have the same happy ending as New York did back then.

"Yeah," said Reggie Bush, who scored a touchdown and also muffed a punt that set up a Vikings score. "One more step."

The seesaw game saw All-Pro Adrian Peterson score three touchdowns for Minnesota and Saints running back Pierre Thomas get two. The Vikings handily won the possession and yardage battles — Peterson rushed for 122 yards and Minnesota gained 475 overall. But the Vikings were undone by five turnovers, including three fumbles.

"We really gave those guys the game," said Peterson, who peeked at the rousing celebrations on the Superdome floor. "Too many turnovers. It's eating me up inside."