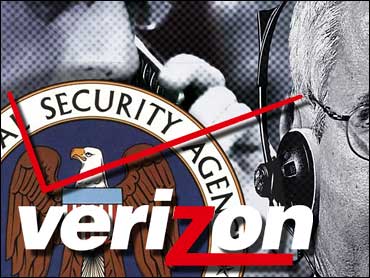 The lawsuit asks the court to stop Verizon from turning over any more records to the NSA without a warrant or consent of the subscriber.

"This is the largest and most vast intrusion of civil liberties we've ever seen in the United States," Afran said of the NSA program.

USA Today reported on Thursday that the NSA has been building a database of millions of Americans' everyday telephone calls since shortly after the Sept. 11, 2001, attacks. Verizon, along with AT&T Corp. and BellSouth Corp., complied, the newspaper reported.

An alleged terrorist with ties to al Qaeda is arrested overseas. Any American phone numbers he has on him or stored in his cell phone or laptop are turned over to the NSA. Under wartime powers approved by the president, the NSA immediately begins listening in on any international calls made to or from that number, without going through the standard legal procedure of first obtaining a court order to establish a probable cause that the person using the phone is part of the al Qaeda network, explains CBS News Pentagon correspondent David Martin.

The NSA also runs that same captured phone number through its database of phone records to determine all the calls made to and from that number inside the United States, again without having to obtain a court order. However, even under wartime powers, the NSA is still prohibited from actually listening to calls made within the United States; if a suspicious pattern emerges, it would have to get a court order before eavesdropping, reports Martin.

The lawsuit claims that by turning over the records to the government, Verizon violated the Telecommunications Act and the Constitution.

"No warrants have been issued for the disclosure of such information, no suspicion of terrorist activity or other criminal activity has been alleged against the subscribers," the lawsuit said.

Verizon, the country's largest telecommunications company by revenue, said in a statement that the company had not yet seen the lawsuit and, because of that, believed it was premature to comment.

The lawsuit seeks $1,000 for each violation of the Telecommunications Act, or $5 billion if the case is certified as a class-action suit.

Afran said that he and Mayer will also ask for documents dealing with the origination of the program and President Bush's role in the program.

Afran and Mayer have filed numerous lawsuits against New Jersey officials over such things as political appointments and finances.

"When he learned that no such authority had been granted and that there was a disinclination on the part of the authorities to use any legal process, including the Special Court which had been established to handle such matters, Mr. Nacchio concluded that these requests violated the privacy requirements of the Telecommications Act," Nacchio's attorney wrote in a statement.

Nacchio agreed with Qwest's attorneys that surrendering its customers' "call-detail records" to the NSA was wrong.

Qwest balked at the request, and pressure, from the NSA, with Nacchio reportedly "deeply troubled" by the implications, USA Today reports. Current CEO Richard Notebaert halted talks with the NSA in 2004 after the two couldn't agree on the details.

According to USA Today, the NSA told Qwest that not sharing the phone records could compromise national security and affect its chances at landing classified contracts with the government, two issues that play a role in Nacchio's own legal woes.

Qwest has been accused of massive fraud by the government and restating $3 billion in revenue. Former executives have been accused of wrongdoing, including Nacchio, who faces 42 counts of insider trading accusing him of illegally selling $101 million in company stock after privately learning Qwest might not meet its financial goals.

Meanwhile, CIA director nominee Gen. Michael Hayden on Friday defended the secret surveillance programs he oversaw while head of the National Security Agency as lawful and designed to "preserve the security and the liberty of the American people."

Hayden's visits to lawmakers on Capitol Hill were complicated by reaction to public disclosure of a NSA program that has been collecting millions of Americans' everyday telephone records.

"Everything that the agency has done has been lawful. It's been briefed to the appropriate members of Congress," Hayden told reporters outside a Senate office. "The only purpose of the agency's activities is to preserve the security and the liberty of the American people.

The White House stood by Hayden as he spent another day promoting himself in face-to-face sessions with lawmakers, CBS News senior White House correspondent Bill Plante reports. President Bush announced Hayden as his choice to head the CIA on Monday.

"We're 100 percent behind Michael Hayden," press secretary Tony Snow told reporters Friday. "There's no question about that, and confident that he is going to comport himself well and answer all the questions and concerns that members of the United States Senate may have in the process of confirmation."

After meeting with Hayden on Friday, Sen. Chuck Hagel, R-Neb., said that he has "absolute confidence" in the general and said his Senate confirmation hearings would help get the facts on the surveillance programs.

"He's going to have to explain what his role was. To start with, did he put that program forward, whose idea was it, why was it started?" Hagel said. "He knows that he's not going to be confirmed without answering those questions."