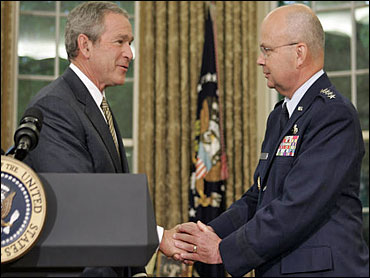 President Bush on Monday chose Air Force Gen. Michael Hayden to lead the embattled CIA, re-igniting a debate over the domestic surveillance program that the one-time head of the National Security Agency once ran.

Republican and Democratic critics also questioned the wisdom of putting a military officer in charge of the civilian spy agency.

"Mike Hayden is supremely qualified for this position," Bush said in the Oval Office, with Hayden at his side. Without mentioning Hayden's critics or their objections, the president said: "He knows the intelligence community from the ground up."

If confirmed, Hayden would replace Porter Goss, who resigned under pressure Friday.

He said that Hayden "has been a provider and consumer of intelligence."

To balance the CIA between military and civilian leadership, the White House plans to move aside the agency's No. 2 official, Vice Admiral Albert Calland III, who took over as deputy director less than a year ago, two senior administration officials said. Other personnel changes also are likely, the officials said, speaking on condition of anonymity because the changes are not ready to announce.

Talk of Hayden's nomination rekindled debate over the administration's domestic surveillance program, which Hayden used to oversee as the former head of the National Security Agency.

"There's probably no post more important in preserving our security and our values as people than the CIA," Hayden said.

Senate Homeland Security and Governmental Affairs Chairwoman Susan Collins, R-Maine, said that to send a signal of independence from the Pentagon, Hayden "may want to consider retiring from the Air Force. That would put to rest questions about whether an active duty military officer should lead the CIA at this time."

Senate Judiciary Chairman Arlen Specter, R-Pa., said in advance that he would use a Hayden nomination to raise questions about the legality of the domestic surveillance program.

Rep. Peter Hoekstra, R-Mich., chairman of the House Intelligence Committee, said he was concerned that Hayden's nomination would detract from the real issue of intelligence reform.

His sentiment was echoed by Republican Sen. Saxby Chambliss of Georgia, who said Hayden's military background would be a "major problem," and by several Democrats.

Mr. Bush noted that Hayden was unanimously approved by the Senate for his current job — the nation's No. 2 intelligence official.

National Intelligence Director John Negroponte, who oversees the CIA and 15 other intelligence agencies, dismissed concerns about having an active military officer take over the civilian spy agency.

"Mike has both the breadth and depth of qualifications that are required for the position," Negroponte said. He called Hayden "a very, very independent-minded person, blunt spoken, who I don't think will have any difficulty whatsoever staking out positions that are independent and responsive to the needs of our civilian intelligence community."

Many of Goss' top aides were expected to soon leave the CIA. Executive Director Kyle "Dusty" Foggo has decided to retire, said an intelligence official who spoke on condition of anonymity because the announcement was not yet public.

The FBI is investigating whether Foggo's friend, defense contractor Brent Wilkes, provided prostitutes and hotel suites to a California congressman jailed for taking bribes in exchange for government contracts. Foggo is also under investigation by the CIA's inspector general.

Bracing for a tough nomination fight, the White House took the unusual step of pre-empting Bush's announcement with a defensive media blitz. "We think the issue is getting the best man for the job and the president has determined that Mike Hayden is the best man for the job," national security adviser Stephen Hadley told The Associated Press. He also appeared on morning news shows before Bush formally announced his nomination of Hayden.

"There have been several directors of the central intelligence agency who have been military officers in the past. So there's precedent for it," Hadley told CBS News' The Early Show. "We don't see any reason to break that precedent ... The question is not military versus civilian. The question is the best person to do the job."

White House counselor Dan Bartlett said Hayden would be the fifth CIA chief in uniform. "He has been viewed as a non-comformist and an independent thinker," Bartlett said.

Hadley said that any nominee to lead the CIA would face questions about the controversial domestic surveillance program by the National Security Agency and that Hayden, the former director of the agency, was the best man to answer those questions.

If Hayden were confirmed, military officers would run all the major spy agencies, from the ultra-secret National Security Agency to the Defense Intelligence Agency.