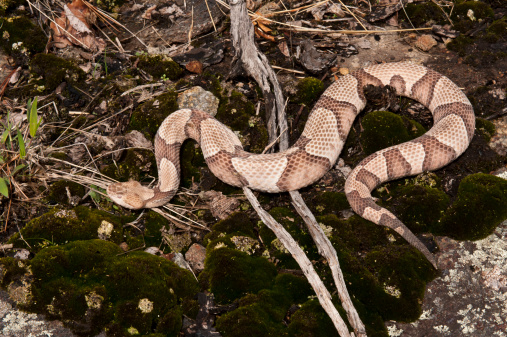 Summer should be filled with fun and relaxation, but it can also be a season of heightened risk for some rare and frightening health hazards, from brain-eating amoebas to uncommon bacterial infections to venomous snake bites.

Here are some of the more unusual cases that have been documented over the years in different regions of the U.S., from Prince William Sound to Martha's Vineyard.

About 7,000 to 8,000 venomous snake bites are reported in the U.S. each year, though the Centers for Disease Control and Prevention says only about five incidents each year prove fatal. "The number of deaths would be much higher if people did not seek medical care," the CDC notes. Experts say the majority of snake bites happen during the warm summer months when people are spending more time outdoors -- what some call the "snake season."

Earlier this month, a Missouri man died after being bitten twice by a copperhead snake while on a camping trip with his family, CBS St. Louis reports. Copperheads are most common in forests, swampy areas and rivers in the eastern half of the U.S.

A 14-year-old Boy Scout in Maryland is one of the luckier ones. CBS Baltimore reports he is recovering at home after being bitten by a copperhead during a late-night visit to a camp latrine on the Broad Creek Memorial Boy Scout Reservation last week.

Earlier this month, in North Carolina, Sgt. Matt Conner had just finished cutting the grass at his house near Jacksonville when an 18-inch copperhead snake bit his left foot, JDNews.com reported July 6.

"I started to run to the house and thought 'I just got bit by a snake. I can't be running around. I gotta keep my heart rate down,'" Conner told the paper. The venom caused his foot to swell severely -- to blow up "like a balloon," his wife Erica Conner said -- sending him to the Camp Lejeune hospital emergency room to get treated with morphine and potentially life-saving antivenin serum.

The most common types of poisonous snakes in the U.S. include several species of rattlesnakes, which can be found in natural habitats from coast to coast; cottonmouths, also known as water moccasins, found in and around bodies of water in the southeast; and coral snakes, which live in wooded or marshy areas in the south.

One of the more unusual infectious disease outbreaks happened at the peak of the summer vacation season on the picturesque Massachusetts island of Martha's Vineyard in July 2000.

Fifteen people on the island came down with tularemia, a rare but serious infectious disease caused by the bacterium Francisella tularensis. Most years, the CDC says only about 100 to 150 cases are reported nationwide.

The outbreak was documented in a study published in the New England Journal of Medicine. The researchers wrote that 11 of those were cases of primary pneumonic tularemia, the most serious type, whose symptoms typically include cough, chest pain, and breathing difficulty. Two of the patients had ulceroglandular tularemia, which manifested itself through fever, skin ulcers and enlarged lymph nodes.

The bacterium that causes the disease can be found in contaminated water, soil, ticks, animals and decaying animal carcasses, the researchers wrote. They suspected that some of the people somehow got infected through mowing lawns and cutting brush where infected animals may have been present. One of the patients remembered being exposed to a dead rabbit while he was cutting brush. "We did identify a seropositive skunk and a seropositive rat on properties where patients had mowed the lawn before becoming ill," the researchers wrote in the study.

Before the 2000 tularemia case on Martha's Vineyard, there had been another outbreak of the disease on the island in the summer of 1978, involving 15 patients, seven of whom were the residents of a single cottage, the researchers wrote. The investigators suspected that the culprit of this particular outbreak might have been a wet dog that aerosolized the bacteria when it shook itself inside the cottage.

The CDC says that, while tularemia can be life-threatening, most cases can be treated with antibiotics.

In July 2013, 12-year-old Arkansas girl Kali Hardig contracted a "brain-eating" amoeba, likely when she was playing at a water park in Little Rock which featured a sandy-bottom lake. After being admitted to Arkansas Children's Hospital in critical condition, Kali recovered after doctors got clearance to give her an experimental treatment using a breast cancer drug. The girl was extremely lucky to survive, as the vast majority of people who get infected with the amoeba die.

The condition is extremely rare, but risk is heightened in summer months when people are more likely to be exposed to the organism in lakes, ponds, rivers and even inadequately chlorinated swimming pools or water parks.

In the most recent case reported this summer, 9-year-old Hally Nicole Yust from Kansas died from the infection after swimming in several lakes near her home.

The amoeba, whose proper name is Naegleria fowleri, is a single-celled living organism. If it gets into the brain it can cause a rare and extremely serious infection called primary amebic meningoencephalitis (PAM), which is usually fatal, the CDC reports. Naegleria fowleri can enter the body of its victim through their nose when they swim or dive in lakes and rivers, and then makes its way up to the brain. In very rare cases, infections can also occur through inhaling contaminated and inadequately chlorinated pool water or contaminated drinking water.

There was great concern last year when the amoeba was detected in the water supply of St. Bernard Parish in the New Orleans area. However, it is impossible to get infected with the amoeba just by drinking water.

There are unfortunate cases every year of stomach bugs running rampant on cruise ships. The culprit is often the extremely contagious norovirus, the most common form of foodborne illness in the U.S., which typically runs its course in one to three days.

But a much more unusual case occurred in July 2004, when passengers on four separate cruises aboard the same ship sailing in Prince William Sound, Alaska, got sick with gastroenteritis. According to a 2005 report published in the New England Journal of Medicine, the repeated outbreaks were caused by Vibrio parahaemolyticus bacteria. Health officials later confirmed that the passengers likely caught the bacteria from raw oysters served on board.

The researchers then tracked back the outbreak to one oyster farm. Even though it was not completely clear why oysters from this particular farm turned out to be the culprit, investigators stressed that it is important to provide additional monitoring for V. parahaemolyticus at oyster farms when water temperatures exceeds 59 degrees Fahrenheit (15 degrees Celsius). The bacteria naturally inhabits saltwater along the coasts of U.S. and Canada, and the CDC reports it is found in higher concentrations during the summer.

The consumption of raw or undercooked oysters is the most common vehicle for V. parahaemolyticus gastroenteritis infection, the researchers wrote. Some of the infection symptoms include watery diarrhea, abdominal cramping, nausea, vomiting, fever and chills, that can last up to a week, according to the CDC.

Once contained to the northeast, West Nile virus is now found in states throughout the country. Summer is peak season for the disease, which is spread by mosquitoes. So far this year, 35 cases of human infection have been reported to the CDC.

Most people who do get infected with the virus will not develop any symptoms, the CDC says. But about 20 percent develop a fever with other symptoms including headache, body aches, joint pains, vomiting, diarrhea or a rash, and may take weeks or even months to recover. In about one percent of cases, serious neurologic illness such as encephalitis or meningitis can develop.

In the summer of 2012, a 76-year-old New England resident was admitted to the Massachusetts General Hospital in Boston, with fever, worsening kidney function and mental confusion. Once in the hospital, he developed a respiratory disorder that caused rapid breathing. These all turned out to be symptoms of West Nile virus infection, according to a 2013 case report published in the New England Journal of Medicine. The man rambled when he communicated and was inattentive; his arms were weak and he could barely more his legs. His mental condition got better three months after the discharge, and he regained some of the strength in his arms, but not in his legs, and he continued to suffer from breathing difficulties.

The case described in the study, while unusual, occurred in the midst of a large outbreak of West Nile virus, the researchers wrote. More than 2,800 people developed neuroinvasive cases of the disease in 2012; last year, the number was much lower, about 1,200 nationwide.

To lessen the risk of such rare but serious consequences, the CDC recommends using an insect repellent and covering up with long pants and sleeves outdoors, especially during the hours from dusk to dawn when mosquitoes are most active.