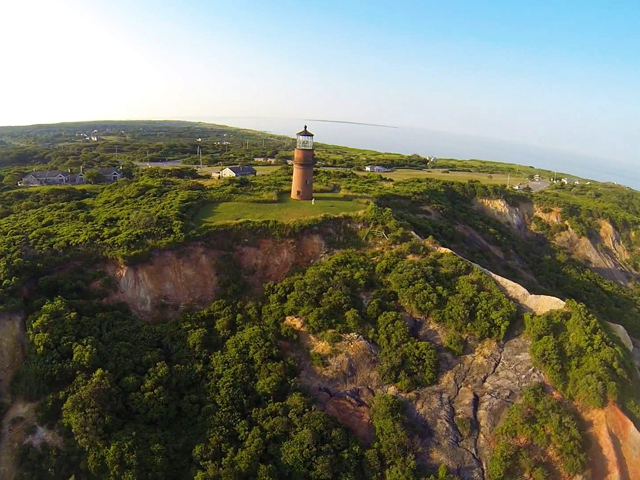 He's the keeper of the lighthouse atop the Gay Head Cliffs at the tip of Martha's Vineyard -- cliffs that are being chipped away by erosion.

There's 47 feet between the cliff and the lighthouse.

Which explains the lighthouse's prominent place on the list of the country's most endangered historical landmarks.

"We are playing against mother nature," said Skidmore.

There's been a lighthouse here since 1799. This one was built in 1856 at a time when this channel was the busiest shipping lane in the country, and boats were guided by the beacon on the hill.

"It's two things. It's warning you about those rocks, and welcoming you home," said Skidmore.

Even today, the lighthouse plays its part in keeping the local economy going. Hundreds of tourists are drawn here each day.

Cully Vanderhoop's family has been running businesses alongside the lighthouse for 70 years.

He really likes it when those tour buses pull up and says it would be a different place without that lighthouse.

"It's like losing a member of your family. It takes a chunk of your heart, your soul," said Vanderhoop.

Surveyors and engineers have identified three potential spots where the lighthouse would be safe for at least another 100 years.

"It's really a matter of keeping the lighthouse here. That's the job of the light house keeper now, is preserving the light. This was a big part of life here," said Skidmore.

Because those who love this lighthouse are not willing to see the light go dark.