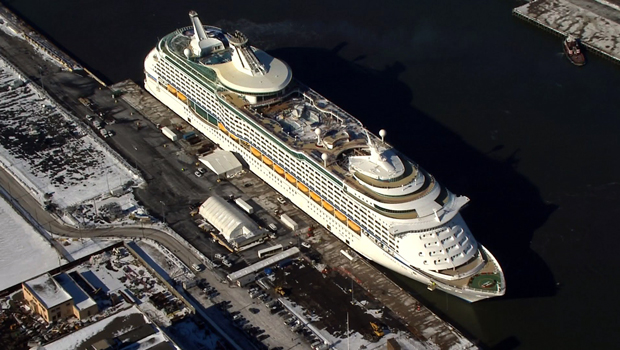 BAYONNE, N.J. -- A cruise ship on which hundreds of passengers and crew members fell ill returned to port Wednesday in New Jersey, with health officials recommending those still showing symptoms to check in at hotels or seek medical care before heading home.

One woman aboard the Explorer of the Seas yelled "We made it!" as the ship docked in Bayonne. Other passengers, with blankets wrapped around them, stood on deck to watch the ship pull in.

The U.S. Centers for Disease Control and Prevention said its latest count puts the number of those sickened at 630 passengers and 54 crew members. The ship, on a 10-day cruise that had to be cut short, was carrying 3,050 passengers.

Sixty-one-year-old Bill Rakowicz from the city of St. Thomas in Ontario, Canada, told reporters that at first he thought he was just seasick. Then he said he left his room and saw people with gloves and "people sick everywhere."

He said he suffered from vomiting, pain and diarrhea and that his experience was simply "awful."

"It was violent for about 24 hours," Rakowicz told reporters after disembarking. "The first 12, 14 hours of it was really, really bad, and then, well, you never felt better for four days."

But he gave high marks to Royal Caribbean for going "above and beyond" in its response.

Health investigators suspect norovirus, but lab results are not expected until later this week. If norovirus is to blame, it would be one of the largest norovirus outbreaks in last 20 years, the CDC said. A 2006 norovirus outbreak on a Carnival Cruise Lines ship also sickened close to 700.

Norovirus - once known as Norwalk virus - is highly contagious. It can be picked up from an infected person, contaminated food or water or by touching contaminated surfaces. Sometimes mistaken for the stomach flu, the virus causes bouts of vomiting and diarrhea for a few days.

The cruise line said most guests who fell ill were up and about as the ship headed to port.

The CDC said it recommended to Royal Caribbean that people who still have symptoms be housed in nearby hotels or seen at medical facilities before traveling home.

CDC investigators boarded the ship during its U.S. Virgin Islands Port call on Sunday. They said no single food or water source or other origin has been identified.

Royal Caribbean is providing all guests a 50 percent refund of their cruise fares and an additional 50 percent future cruise credit. It's also reimbursing airline change fees and accommodations for guests who had to change plans for traveling home.

Stricken guests who were confined to their staterooms are being provided a credit of one future cruise day for each day of confinement.

After returning to port, the ship will be sanitized and no one will be allowed aboard for a period of more than 24 hours as an extra precaution, the cruise line said.

Explorer of the Seas is on track to depart at its originally scheduled time Friday afternoon on its next cruise, a nine-night trip with port calls in Puerto Rico, St. Thomas, the Dominican Republic and Haiti, a Royal Caribbean spokeswoman said.