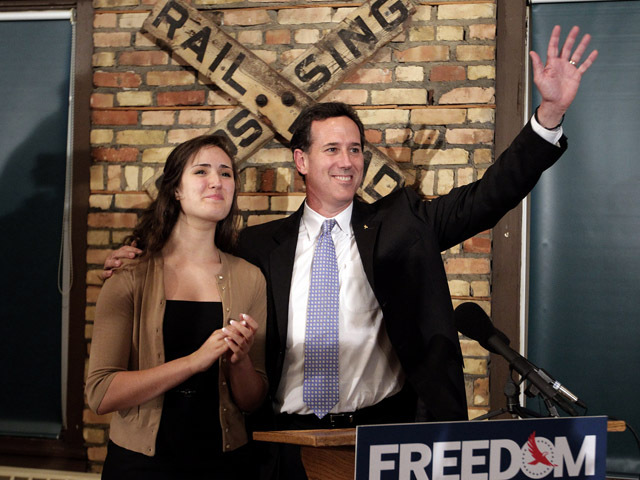 Even as Mitt Romney holds a commanding lead in the delegate count in the race for the Republican nomination, another win in the South for Rick Santorum - this time in Louisiana - highlights the problems Romney is having appealing to more religious and socially conservative "values" voters below the Mason-Dixon line.

In spite of a large win for Romney just a few days ago in Illinois, Rick Santorum won a decisive victory in Louisiana with the support of both men and women of all age groups, conservatives - including those who consider themselves only somewhat conservative - Tea Party supporters, white evangelicals, and nearly half of voters who see the economy as the most important issue in their vote.

As was the case in his recent wins in Alabama, Mississippi, Tennessee and Oklahoma, much of Rick Santorum's support comes from white evangelicals - a group that helped give Mike Huckabee a victory over then-frontrunner John McCain in Louisiana in 2008. This year, evangelicals voted for Rick Santorum over Mitt Romney by more than two to one, 56 percent to 22 percent. Fifty-six percent of Republican voters in Louisiana were white evangelicals, and Mitt Romney has yet to win a primary where they made up more than half of the vote.

In addition, 65 percent of voters in Louisiana said they attend religious services at least once a week, and more than twice as many voters from this group chose Santorum (58 percent) over Romney (23 percent).

It was a closer race among the 17 percent of voters who call themselves politically moderate, and Romney won among voters who make over $200,000 a year -- but he failed to win the support of the vast majority of Louisiana voters who were conservative or make less money.

In spite of the loss, Mitt Romney retains an edge on the issue of electability. As they have in every contest so far, a plurality of voters in Louisiana think beating Barack Obama is the most important quality in a candidate from a list of four (38 percent), and 52 percent of those voters cast their ballot for Mitt Romney.

But voters in Louisiana who put a premium on defeating President Obama were slightly outnumbered overall by "values" voters - those who either picked either being a true conservative (23 percent) or having strong moral character (23 percent) as the most important quality in a candidate. And seven in 10 of these voters chose Rick Santorum.

In the eyes of many Republican voters, Romney continues to face a challenge in relating to most Americans. Though voters in Illinois picked Mitt Romney as the candidate best able to understand the needs and problems of average Americans, he came in third in Louisiana (21 percent), behind Rick Santorum (42 percent) and Newt Gingrich (26 percent).

The next contests are on April 3rd, when primaries include Maryland and Wisconsin. With fewer evangelical voters, those states may prove to be more hospitable territory for Mitt Romney.