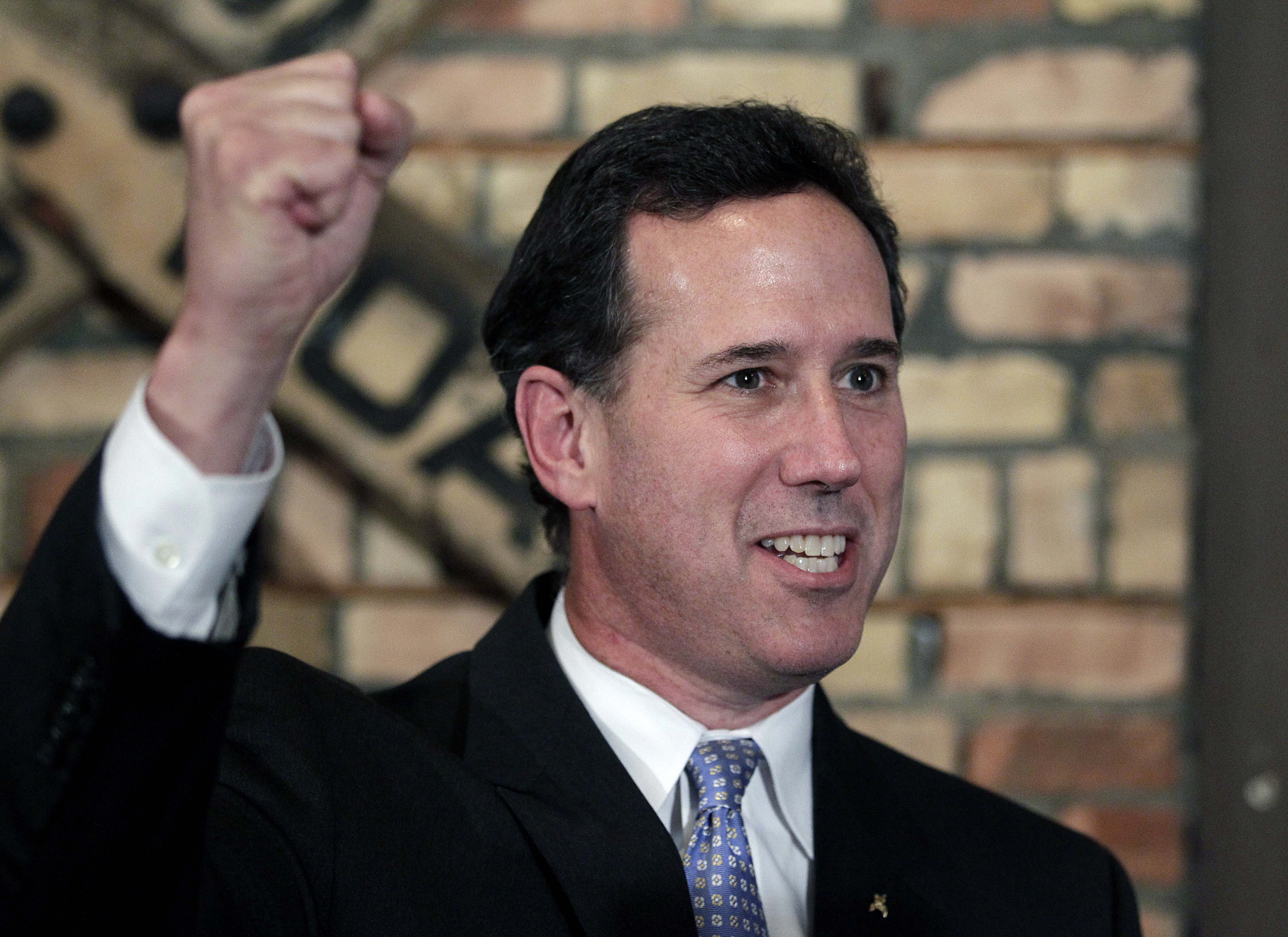 (CBS News) Rick Santorum easily won the Republican presidential primary in Louisiana on Saturday, garnering close to twice as many votes as his next closest competitor. Santorum's victory is fresh evidence of the weakness of front-runner Mitt Romney, who is nonetheless increasingly likely to be the Republican who takes on President Obama in November.

Santorum, a former Pennsylvania senator and social conservative, did well among evangelicals, Catholics and those who identify themselves as "very conservative," according to CBS News exit polls. The win marks the 11th victory for Santorum, who has done well in the Deep South, including victories earlier this month in Alabama and Mississippi.

With all 4,267 precincts reporting, Santorum had about 49 percent of the vote, or 91,305 votes, while second place Romney had 27 percent, or 49,749 votes. Former House Speaker Newt Gingrich was a distant third with 16 percent and Texas Rep. Ron Paul had just 6 percent of the counted vote.

"To the people of Louisiana, Thank you very much. You have come through and come through in a big way," Santorum told supporters in Wisconsin.

"I just want to thank you for making a very clear and crisp statement and that is you don't believe as the pundits have said that this race is over. You didn't get the memo. We're still here. We're still fighting," Santorum said.

Romney did not hold a rally but called Santorum to congratulate him and sent out a tweet doing the same.

Santorum also did well among those who consider the economy the most important issue of the election. Among those voters, Santorum had 46 percent support, compared to 30 percent support for Romney, according to CBS News exit polls. The economy was considered the top factor among Republican voters in Louisiana Saturday.

Romney, on the other hand, did well among those who say that defeating Mr. Obama is their top priority for choosing a candidate and those who identified themselves as moderates.

Santorum hopes to parlay the win in Louisiana to more wins, but the math is prohibitively difficult for the candidate who was already campaigning in Wisconsin on Saturday. Voters in Wisconsin, Maryland and Washington, D.C., head to the polls on April 3.

"Rick Santorum is like football team celebrating a field goal when they are losing by seven touchdowns with less than a minute left in the game," said Romney spokesman Ryan Williams following Santorum's win.

There were about 20 delegates at stake in Louisiana Saturday, but Santorum is not expected to claim all of them, even with his win. Another 26 delegates are to be claimed later in the process. Going into the race, Romney had 549 of the 1,144 delegates needed to win, according to CBS News estimates. CBS News estimates Santorum will pick up at least six delegates tonight, bringing his total to 237.

Not counting Louisiana, Romney would need to win 45 percent of the remaining delegates while Santorum needs to win about 70 percent to win the nomination.

Louisiana divides its delegates proportionally, so Romney could collect nearly as many delegates as Santorum, even with a loss, though it was not immediately clear how many each would collect. The other candidates were not expected to collect any delegates.

Gingrich has close to 130 delegates according to CBS News estimates after winning in just two states: South Carolina in January and his native Georgia earlier this month. Texas Rep. Ron Paul has not won any contests outright but has amassed more than 40 delegates.

Beyond the April 3 elections, Santorum is already looking to the April 24 contest in his home state of Pennsylvania, where more than 70 delegates are on the table. More than 200 delegates are at stake that Tuesday, including Connecticut, Delaware, New York and Rhode Island.

None of the candidates appears to be dropping out anytime soon. While Romney is now on pace to garner enough delegates to win the nomination before the nominating convention in August, it remains possible that he finds himself short of the necessary delegates after the last primary in Utah at the end of June.

That could lead to some of the so-called "unbound" delegates switching to Romney to unify the party, or it could lead to a contested convention. Santorum and the other candidates, of course, are hoping for the latter.

On the stump, Santorum frequently calls on Republican voters not to nominate Romney, whom he calls moderate, reminding crowds that nominating incumbent President Gerald Ford, a moderate, in 1976 over the more conservative Ronald Reagan was a mistake. Ford lost to Jimmy Carter, a Democrat, who lost to Reagan four years later. Not coincidentally, 1976 was the last year there was a contested Republican nominating convention.