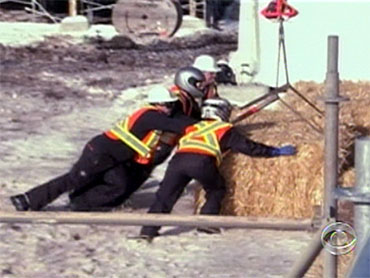 The United States intensified pressure on a radical cleric Thursday, seizing the governor's office from his fighters in Najaf and killing an estimated 40 insurgents in battles east of the holy city, a U.S. official said.

The soldiers took control of the building in Najaf without a fight, but heavy gunfire was heard after they moved in and smoke rose over the city. Motorists fled the area through deserted streets, honking their horns. Fighters loyal to cleric Muqtada al-Sadr had controlled the building since they launched their rebellion April 4.

Fighting east of Najaf killed an estimated 40 militiamen around Kufa, said Capt. Roger Maynulet, commander of a tank company with the Army's 2nd Armored Cavalry Regiment. U.S. officers said American forces were sent to the east of the city to draw militia fighters away from the governor's office.

Chief U.S. administrator L. Paul Bremer announced the appointment of a new governor for Najaf province as part of the campaign to crack down on al-Sadr's militiamen.

In Baghdad, a suicide attacker detonated a car bomb outside the so-called Green Zone that houses the U.S. headquarters, killing five Iraqi civilians and a U.S. soldier. Also Thursday, the U.S. command said that two U.S. soldiers were killed and two were wounded when a roadside bomb exploded in Baghdad.