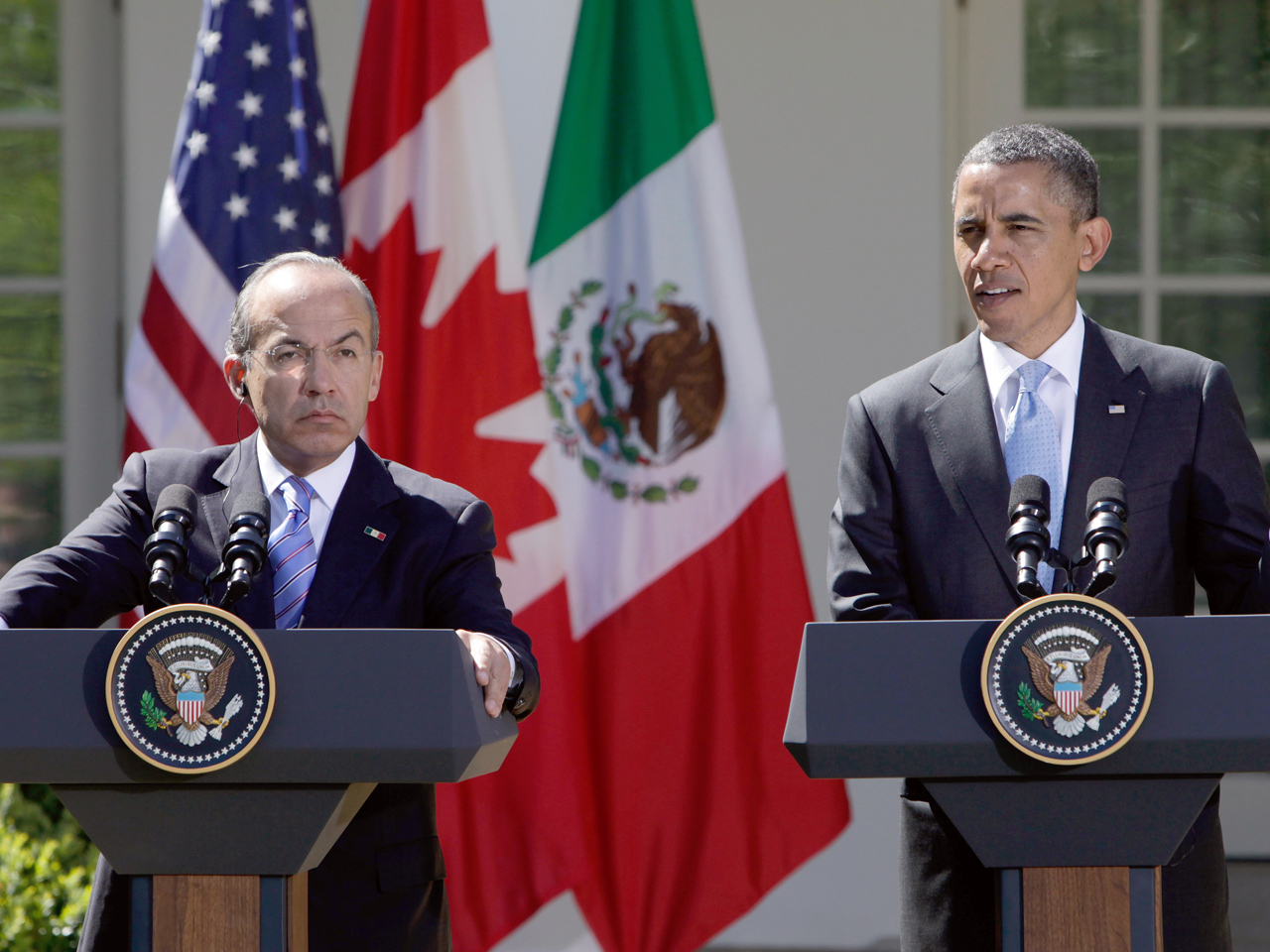 (AP) WASHINGTON - The explosion of drug-fueled violence along Mexico's border with the United States could harm relations between the two nations, President Barack Obama said Monday; Mexico's leader retorted that much of the problem of drugs and guns begins on the U.S. side of the line.

In the thick of political contests in both the United States and Mexico, Obama and Mexican President Felipe Calderon traded unusually direct claims about the cause and effect of the drug violence that has consumed a swath of northeastern Mexico. They were cordial and complimentary to one another, but did not hide the degree of worry on both sides about a six-year spasm of violence that has killed more than 47,000 people.

"It can have a deteriorating effect overall on the nature of our relationship," Obama said. "And that's something that we have to pay attention to."

Calderon made a government crackdown on warring drug cartels the hallmark of his six-year term, which expires later this year. His center-right party has seen its election chances fall in the face of a wide perception in Mexico that the crackdown has not worked.

Beyond the terrible human cost, the battling drug gangs in Mexico and in Central America cause economic problems and political and security concerns for the United States, Obama said.

The three leaders launched a new bid to pare back regulation and boost North American trade.

After a one-day summit, Obama said the United States has trimmed outdated and burdensome rules in talks with both its neighbors, but all three countries will now go beyond that.

"Our three nations are going to sit down together, go through the books and simplify and eliminate more regulations that will make our joint economies stronger," he said.

Obama noted trade among the three neighbors now tops $1 trillion a year, and he wants to see that number rise. "This is going to help create jobs," he said.

The summit ranged broadly across issues of energy and climate change, immigration and the fight against the drug trade.

Obama warned of a possible "spillover effect" on American tourism and American expatriates living in Mexico and bordering nations that also have had problems with drug cartels.

Sounding testy, Calderon remarked that no American "spring-breakers" were harmed in Mexico this year. Mexico is a favorite place for U.S. college students to spend their springtime holiday breaks from school.

The flow of guns, especially assault weapons, from the United States to Mexico sabotages the work of his government in fighting the drug gangs, and the U.S. government has not done enough to stop it, Calderon said.

"Despite the perception of my country, last year 23 million tourists came to our country by plane, plus another 7 million in cruise ships, plus another 50 million," who came by land, Calderon said, during a rambling defense of his nation's overall safety and stability.

He credited Obama with making an effort to reduce the gun traffic, but said Obama faces "internal problems ... from a political point of view." That is a reference to Republican opposition in Congress and wide opposition from Republicans and gun-rights advocates elsewhere to a new assault weapons ban or other curbs on gun sales that feed the Mexican market.

Calderon singled out the high number of gun shops along the U.S.-Mexico border, dangling the possibility that there is a deliberate attempt to profit from the Mexican market.

The Obama administration claims that in the absence of an assault rifle ban that expired before Obama took office, it is working to tighten inspections of border checkpoints and require reporting of multiple sales of large weapons.

"The Mexican government has taken this very seriously, at great cost to itself," Obama said during a Rose Garden news conference dominated by U.S. domestic political fare. We have an obligation to take it just as seriously, in part because we are the ultimate destination for a large chunk of this market."

The Obama White House has ruled out any consideration of legalizing drugs such as cocaine or heroin, which would undercut the criminal cartels.

Notable by its absence from a post-summit news conference in the Rose Garden was the controversial Keystone XL oil pipeline from Canada's oil sands in Alberta through the United States to the Gulf of Mexico. Obama shelved the plan pending further review — and has endured ferocious Republican attacks ever since, with Republicans calling the move a blow to job creation and U.S. energy needs. He maintains Republican leaders in Congress forced his hand by insisting on a decision before an acceptable pipeline route was found.

Harper has voiced disappointment with Obama's decision. He also visited China in February to explore alternatives. Canada has the world's third-largest oil reserves — more than 170 billion barrels — after Saudi Arabia and Venezuela, and daily production of 1.5 million barrels from the oil sands is expected to rise to 3.7 million by 2025.