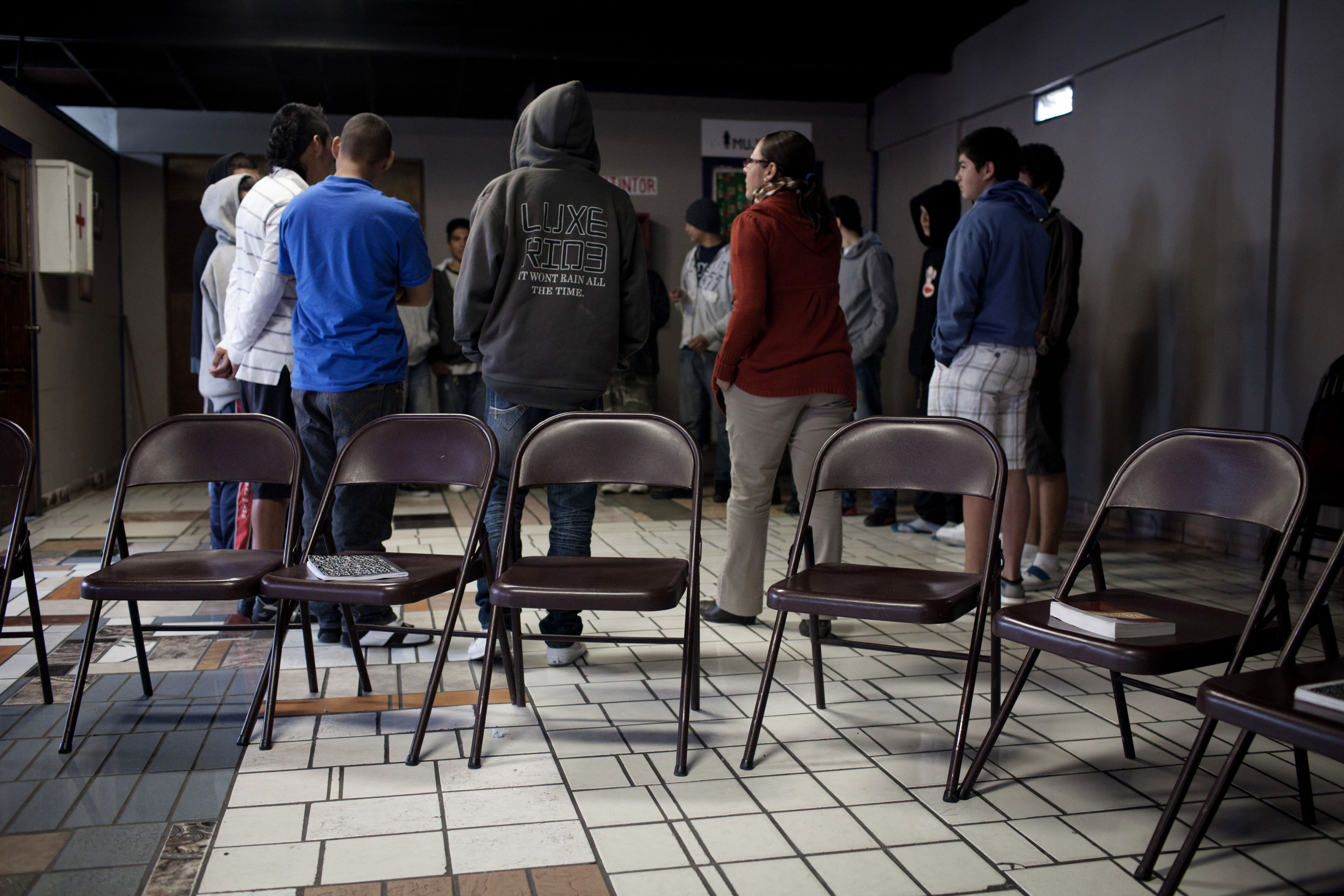 (AP) TIJUANA, Mexico - Luis Alberto is only 14 but has the wizened gaze of a grown-up hardened by life. He never met his father, worked as a child, was hired by a gang to sell drugs and then got addicted to them.

In October he checked into Cirad, a rehab center west of this border city that handles about 500 drug addicts at a time, a fifth of them younger than 17.

"They brought me here because I was using and selling 'criloco,"' Luis Alberto said, referring to methamphetamine, the drug of choice for 90 percent of adolescents in detox because of its low cost and easy availability.

Luis Alberto is just one of an increasing number of young people being used as "mules" to ferry drugs across the border into the U.S. or sell them in nearby Mexican towns, said Victor Clark, an anthropologist who studies drug trafficking.

"Minors are cheap labor and expendable for organized crime in an area where there are few job opportunities or places for recreation, and where the distribution and consumption of drugs have grown fast," Clark said.

Mexican authorities say they are aware of the problem, but there are no official figures on the number of adolescents detained for selling or distributing drugs because the law forbids keeping criminal records for minors.

Most of them were high school students who carried drugs, usually methamphetamine or cocaine, hidden in their bodies or in their cars, Mack said.

Clark said similar things are being seen all along the border, at Mexican cities like Nogales, Ciudad Juarez and Reynosa. "It's growing at a worrying pace," he said.

Officials at drug rehab centers across Tijuana estimate that of the approximately 500 adolescents now undergoing treatment, about a tenth of them are like Luis Alberto, not only addicted to a drug but also used by cartels to sell it.

Luis Alberto, whose last name cannot be published because he is a minor, said he started selling drugs about two years ago in a neighborhood of east Tijuana along with other minors who were hired by "a boss." He made about 200 pesos ($16) a day, which he says he spent on food and drugs.

"Between me and my friends we sold about 40 packets a day. My boss kept 1,100 pesos (about $88) per packet and the rest was for us. Sometimes there were about three or four packets left over and we just divided them among ourselves," he said.

Sometimes the drug bosses used the children as lookouts in case police or soldiers approached, he added.

Mexico's cartels have also employed children for their hit squads.

In what may be the most shocking case involving a youth in Mexico's drug war, a 14-year-old boy born in San Diego and known only as "El Ponchis" was arrested in December 2010 in central Mexico and told reporters he had been kidnapped at age 11 and forced to work for a cartel. He said he participated in at least four beheadings.

The number of youths 18 and younger detained for drug-related crimes in Mexico has climbed from 482 in 2006, when President Felipe Calderon launched his offensive against drug traffickers, to 810 by 2009. The latest available numbers indicate 562 youths under age 18 were arrested in the first eight months of 2010.

In Tijuana, officials grew aware of the growing involvement of young people at the end of 2008 as more and more youths turned up at drug rehab centers and told their stories, said Jose Luis Serrano, director of the El Mezon rehab center.

Serrano said that on average 70 adolescents come to his center each month with addiction problems, and about a tenth of them have also worked in the drug trade.

Jose Ramon Arreola, director of the department for children and adolescents at the Cirad center, has seen a similar trend. "There are a lot of drugs on the street; anybody can tell you how easy it is to get some," he said.

Serrano said drugs became extremely cheap by the end of 2008, with methamphetamine easily available and selling for about 15 pesos (a little over $1).

Due to increased border vigilance, "it became harder for the drug traffickers to cross the border into the U.S., and they started paying their employees with merchandise, which the employees then had to distribute along the border. That was when we noted an increase in teen drug use, mainly crystal (methamphetamine)," Serrano said.

According to the National Survey on Addictions, Tijuana has Mexico's worst methamphetamine addiction problem. The Tijuana Psychiatric Institute says it has about 22,000 meth addicts.

Serrano and Arreola point to outdated laws as one reason gangs have recruited young people to help push drugs. In Baja California, children under 17 can be jailed for no more than seven years even if they are convicted of serious crimes such as murder, violent robbery or involvement in a drug cartel.

Tijuana was one of the first cities to which Calderon sent troops to fight the cartels five years ago, yet hundreds of kilos of drugs still arrive each week for local consumption or for sale in other cities, military and police officials said.

The Sinaloa cartel, considered Mexico's most powerful crime organization, is mainly responsible for bringing in heroin, cocaine and marijuana, said Gen. Gilberto Landeros, the military official in charge of Baja California. Other gangs from Jalisco and Michoacan bring in mainly methamphetamine, he said.

"We are fighting the supply but not the demand, and as long as there is demand, there will be people producing and distributing the drugs," said Jose Hector Acosta, director of the treatment department at the Youth Integration Center, an organization that has been treating drug addicts for 37 years.