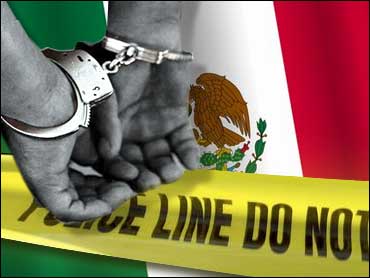 SAN DIEGO - Two members of a breakaway Mexican drug gang dissolved their victims' corpses in vats of acid in a gruesome display of Mexican cartel tactics played out on U.S. soil, a prosecutor told jurors Wednesday.

The defendants held two kidnap victims for weeks in the bedroom of a home in a middle-income San Diego home as ransom payments were negotiated, said Mark Amador, a San Diego County prosecutor.

The victims were dragged downstairs and killed before their bodies were placed in two 55-gallon barrels of simmering fluids being heated by propane tanks, Amador said.

The technique of dissolving bodies in liquid is common among warring Mexican cartels but extremely rare on U.S. soil.

Amador told jurors the liquids are typically made of supplies that can be purchased at Home Depot, such as pool cleaners. It allows for evidence to be destroyed.

Jose Olivera Beritan and David Valencia are charged with both murders and kidnapping, while Beritan is charged with a third murder. They are the first defendants to go on trial among 17 people who were indicted in 2009 in what authorities said was a campaign to export violence used by a Mexican drug gang to the United States.

Beritan is also charged with an attempted kidnapping in January 2007. Authorities said the victim was abducted in a San Diego suburb by assailants wearing police uniforms, then managed to escape. The victim is expected to testify.

Prosecutors said the defendants belonged to "Los Palillos" — or "The Toothpicks" in English — a group that broke from the Tijuana-based Arellano Felix cartel around 2002 and moved to the San Diego area.