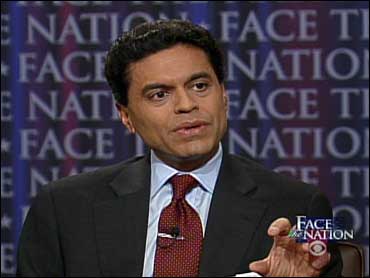 In the wake of the tragic Mumbai attacks this past week, the United States is in a unique position to help South Asian countries combat terrorism - but only if they can see beyond their own national security.

So said Fareed Zakaria, editor of Newsweek International, who appeared with other noted political authors on CBS' Face The Nation.

"What's happening now is, the problems of Pakistan, Afghanistan and India are bleeding into one another," Zakaria said, "so that what you have is a kind of South Asian terrorism, where these groups are feeding off each other, finding pockets where they can train in lawless parts of the country," including areas where governments have not maintained control for 200 years.

Zakaria, author of "The Post-American World" (Norton), said that the Pakistanis rationalization that while some militants are bad others are good (including those groups which the Pakistani military has created, trained and sustained for three decades) if they serve Pakistan's national security interests.

Zakaria said the Pakistani government seems more understanding of this reality, but that it might take America - and its purse strings - to affect change.

"We've given Pakistan $10 billion of aid over the last five or six years. We have close relations with the military. If any outside player can play a role here, it's us. And I think it would be to try to make the Pakistanis understand that, you know, it is not in their interest that Afghanistan be unstable, that India be on edge, that they will prosper as a nation. It's a sort of broader, you know, economic understanding of national security than a narrow, competitive political-military one.

"And there's a really interesting question of, can you get the Pakistani military to see their national security in this broader way?"

Joining in the discussion of U.S. foreign policy in the upcoming Obama administration was investigative reporter Jane Mayer, author of "The Dark Side: The Inside Story of How The War on Terror Turned into a War on American Ideals" (Doubleday).

(CBS)
Meyer (left) said, contrary to the Bush-Cheney administration, Obama is dividing his national security portfolio rather than giving it over to the vice president, as President Bush did. "Obama so far seems to be so much more involved in the details and in kind of wanting to command the policies all the way up and down," she said.

"Another difference that is very important is that both the president coming in and the vice president are lawyers. And one of the things that happened in the last administration was neither of them were, they were not constitutional scholars. And they enacted policies, including legalizing torture for all purposes, that really were not constitutional. And I don't think we're going to see that again.

"And the secretary of state is also a lawyer now," she added, referring to Obama's selection of Sen. Hillary Clinton. "These people respect the law, I think."

(CBS)
Washington Post journalist Bob Woodward (left), author of "The War Within: A Secret White House History 2006-2008" (Simon & Schuster), concurred that the new administration will represent "a whole new center of gravity for the news media, for the world."

Calling Obama's national security team "amazing," he likened it to Goldilocks and the Three Bears: "You've got 'too cool,' which might be - or at least 'appropriately cool' - General Jones as the national security adviser; Gates is kind of 'just right,' in the middle; and Hillary Clinton, 'hot.'"

Referring to Obama's pick of Hillary (of whom he said, "She never goes away"), Woodward said that Obama's choice reflects, perhaps, the notion that because the deep economic crisis will require so much of his time, "go ahead and give Hillary and Bill the world."

Zakaria said that while Hillary may "get the world," and she will certainly be doing her share of traveling, the appointment of Marine General James L. Jones (a former NATO commander, aide to Defense Secretary Bill Cohen, and critic of Rumsfeld's handling of the Pentagon) as National Security Adviser "suggests that Iraq and Afghanistan will be managed out of the White House."

In addition to foreign policy, the standing of America abroad due to the election of Barack Obama will mark a sea change, said Michael Eric Dyson, author of "April 4, 1968: Martin Luther King, Jr.'s Death and How It Changed America" (Basic Civitas).

(CBS)
Dyson (left) said that because Obama was following in the tradition of civil rights battles but was not implicated in internecine skirmishes, he is not blemished by the wounds of civil right battles when he talks about race. "I think that gives him a kind of moral purchase in the broader world," he said.

He also said his background teaching constitutional law and working in poor communities will shape how he approaches the work of the administration. "It may not be his race as much as his community organizing background that will play a significant difference here, because a person who has organized poor people, who has attempted to get their interests and concerns as part of his bailiwick, will exert a profound influence over those issues when it comes to the economy, when it comes to making America safe, when it comes to protecting borders, and when it comes to trying to articulate ideas that will resonate not simply with African-Americans but more broadly."

Mayer agreed: "To the rest of the world, it sends a tremendous signal, I agree, especially at a point where we're being accused in this country of not living up to our ideals because of things like Guantanamo and black site prisons.

"And so to have an election where it shows that democracy really works and there's a meritocracy in the country and racism isn't going to stop somebody from getting to the top, I think has been a tremendously, liberating moment for the country - and for the rest of the world.

"It's totally discomfited al Qaeda, among others," she added. "You have got these bizarre sort of statements from Ayman Zawahiri, the spokesman for al Qaeda, trying to sort of readjust himself and say that, you know, America is still a racist country. He's kind of at a loss for how to deal with this. So it's been very helpful."