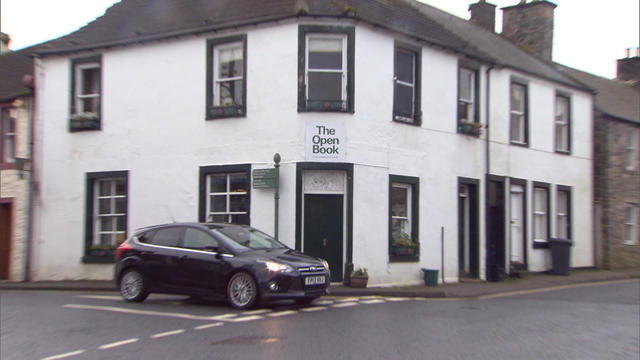 There's no easy way to get to Wigtown. Planes and trains stop hours shy of the remote village on Scotland's sea-swept west coast. With so much peace and quiet, it almost makes sense that the tiny town, population 900, has 14 book-themed shops, reports CBS News' Jonathan Vigliotti.

But nothing compares to the relative newcomer, the Open Book, whose simple shelves of used novels and non-fiction are attracting book lovers from all over the world.

"I had a bit of a look into it and thought, 'yes, it is right up my alley,'" said Kristie Vidotto, an English teacher with a dream of owning her own book shop.

At the Open Book, that dream is brought to life. A rotating cast of tourists gets the keys to their very own bookshop. It's part of a unique Airbnb listing by aspiring Los Angeles screenwriter Jessica Fox.

"What is it about books that attracts you so much?" Vigliotti asked.

"It is the lifestyle. You know, it's really odd, because I'm not a big reader," Fox said. "Not at all. I like the movie versions of things way better."

The Open Book feels like it belongs in a movie -- all of it a product of Fox's imagination.

"I knew it was Scotland. I could kind of see myself in this woolly jumper. I could like hear the rain outside. I could smell the bookshop. I could see myself behind the counter reading a book," Fox said.

Google led her to Wigtown, and when her Airbnb listing went live in 2015, many followed.

"There was a couple in their 80s who had just gotten married and they did this as a honeymoon. So already that's quite amazing," Fox said.

The bookshop and its upstairs living quarters are booked through 2020.

Guests at the Open Book pay about $50 a night to work for free. They can change the window displays, business hours and even the prices. But with so many book shops and so few residents, visitors tend to read more than they sell – including words of wisdom from previous shopkeepers.

"A lot of people who've worked here have agreed if you play James Taylor people like slow down and like read more books and will buy more books which is interesting. He's like the secret to bookshops," Fox joked.

Other tips of the temporary trade are penned in the Open Book's diary.

"Accept all or as many possible invitations from local residents who stop by the shop. People in Wigtown are very friendly. So make it a priority to meet them," one tip reads.

For Kristie Vidotto, this a holiday for the imagination -- a world that in one week's time will be handed over to another wanderlust.

"What's it like to be sitting in the middle of your dream realized?" Vigliotti asked Fox.

"I guess then the real question is, like, what do I dream next?"