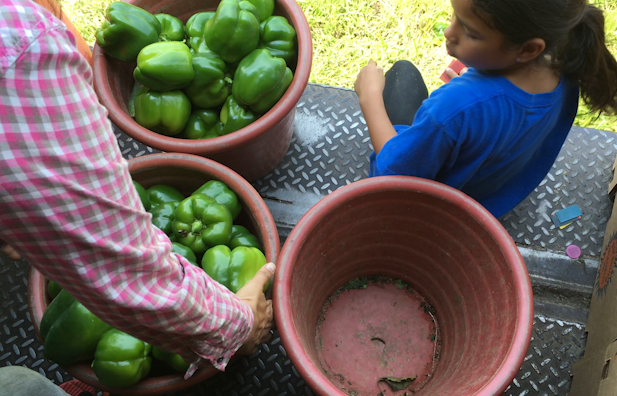 LAKE PARK, Georgia — Every couple of hours, once they finished picking the “good” vegetables from a section of the field, the Delgado family’s large white truck would lurch forward through the farm slowly, crushing throwaway bell peppers scattered along planted rows. Adriana Delgado’s eldest son, Jose, was responsible for driving, while her two youngest children, 4-year-old Flora and 8-year-old Julia, stayed close to her inside the back of the truck. They helped their mother to sort through succulent green bell peppers and place them into boxes, intermittently handing out buckets to their siblings and cousins working in the field.

“Hot out here! Hot!” said Julia Delgado, talking into an iPhone camera she was using to record the family’s morning activity. Adriana Delgado had driven more than 300 miles north from Florida to Georgia the previous day, with five of her nine children. The family was halfway through the first day of their seasonal contract job picking farm-grown vegetables, which takes them from state to state.

“A typical year for me is when the kids finish school, we go to Georgia,” said Adriana Delgado in her native Spanish. “It’s always Georgia first, then North Carolina, and then Tennessee -- we work there for about three months, and then back to Florida, all over again.”

There are nearly two and a half million seasonal farmworkers in America, according to Farmworker Justice, a national nonprofit and advocacy group. Based on data from the Department of Labor, the group estimates that up to 80 percent of these workers are Hispanic, mostly from Mexico.

Between 50 and 80 percent are believed to be undocumented -- like Adriana Delgado.

As migrant farmworkers, the Delgados pack up and leave their home in Immokalee, Florida to follow the harvest for up to five months every year. Adriana Delgado came to America with her husband Omar more than 20 years ago, from their hometown in Zacatecas, Mexico.

Her husband was deported in 2012, after a police officer pulled him over near Orlando while he was driving back home from a seasonal job in Georgia.

“It’s a risk, always a 100-percent risk,” Delgado said, observing how driving as an undocumented immigrant had become even more worrisome in recent years as deportation rates and immigration raids have increased. Under the Obama administration there have been more than 400,000 deportations a year. According to the Pew Research Center, more than half of those deported had not been convicted of any crime.

Said Delgado: “My husband wasn’t doing anything, he was only driving to work. And when they deported him they didn’t stop to think about the fact that we’re not delinquents. We’re simply hardworking laborers, doing work that people here won’t do.”

More than 5 million school-age children in America have at least one undocumented parent, according to new data published by the Migration Policy Institute. Eighty percent of those children were born in the U.S., like most of Delgados’ kids.

“The American Dream meant to me a better future for me, for my family,” said Delgado. “I had crossed the border three times,” she added, explaining how these crossings got more and more dangerous because of increased border security and “many groups that want to assault people that cross the border.”

Her eldest son was an infant when his parents first brought him to this country, and in recent years he was able to obtain semi-legal status to remain in the U.S. thanks to a 2012 program known as Deferred Action for Childhood Arrivals (DACA) championed by President Obama.

“[DACA] makes my life a lot easier, I can drive without being scared to get stopped, I can apply to work somewhere else,” Jose Delgado, 27, told CBS News.

He described feeling “scared” to assume the role of “man of the house” when his father was deported. “I had to fill his shoes, basically... but you get used to it.”

Over the past four years, DACA status has been granted to more than 800,000 undocumented immigrants, mostly young people like Jose Delgado, who met a list of requirements to remain in the U.S. For example, no one with a criminal record is eligible for DACA, and all applicants had to have come to the U.S. before the age of 16.

All of Jose Delgado’s younger siblings are U.S. citizens, born in this country and educated and raised in Florida.

“[My dad], he hated seeing us in the fields,” said Marilu Delgado, 15, who was in the courtroom when her father’s deportation was ordered. “I was daddy’s girl ... he would get angry at my mom and say, ‘Why did you bring the girls to the field? This is not the place for them to be in.’”

“The work -- we get it because no one else will do it,” said Adriana Delgado. “When I arrived here, well, I knew I was going to work, but I didn’t know that the work was going to be so difficult. ... Sometimes we would live in the countryside [but] sometimes we would sleep in the car, with the children, in the heat, with the car on so they wouldn’t get hot.”

Delgado claims that farm owners “knew” that most of their laborers in the field were undocumented, and routinely tried to pay them in cash, to avoid paperwork issues.

“Forty to 80 percent can be undocumented on any given day, and I can tell you, if we were to lose 40 to 80 percent of our workforce, we would be crippled here,” Alfie Oakes, owner of Oakes Farms in Immokalee, Florida, told CBS News.

Oakes Farms encompass more than 1,400 acres of farmland and several packinghouses, and distributes its farm-grown vegetables across several states. Adriana Delgado said that she worked at Oakes Farms throughout her children’s most recent school year. However, Oakes said he did not know Adriana, or how many other undocumented individuals were employed on his farm.

“We have four or five sub-contractors that go out every day and round up the workers, so on any given day it can change. It can be 20 percent [undocumented laborers] one day, and 80 percent the next,” said Oakes.

According to the U.S. Department of Agriculture (USDA), hired farmworkers make up less than one percent of all U.S. wage and salaried workers, but they play an essential role in U.S. agriculture. The collective farm net income in the U.S. is $54 billion, and the output of farms contributes about $177 billion to the national gross domestic product (GDP).

U.S. citizens comprise less than one-third of all farmworkers. Oakes noted that undocumented laborers not only contribute to a stable farm economy but also help ensure reliably low food prices.

“The price of food would go up, through the roof ... We tried, three years ago, to hire local people here from Naples, and it was a total disaster, really,” said Oakes. “At the end of the day, 180-200 people that we tried to hire for that day, after the second day we had about 40 people left. And that wasn’t even in the hot fields. From firsthand experience, as much as we would like to think it would work, it’s just not the case.”

Despite the sweltering heat of Georgia’s afternoon sun, none of the Delgado children complained about having to work every day, all day, all summer. Even the younger kids, for whom working in any capacity is prohibited, pledged excitement at the prospect of “getting money.”

Federal child labor laws allow children as young as 12 to legally work in the agriculture sector when school is not in session. Kids 12 and 13 can only do non-hazardous jobs, and only if their parents give permission or work at the same farm.

Asked about how she felt about taking her kids to work, Adriana Delgado said that they only really started helping “when they got older.”

“Around 9 years old, they started to help us ... and I think that this has also helped them to understand what agricultural work is like ... so that they keep moving forward and don’t quit school just like that,” said Delgado. “I did research, when we started working, but if there wasn’t a day care -- and there often isn’t -- I prefer to bring my children to work and take of them myself, and see that they’re well.”

Before the Delgados arrived in Georgia to pick bell peppers this past June, they packed up their house in Immokalee and crammed all the essentials into the car.

“I mean, I’m happy to go, but at the same time I’m sad. I wanna have that normal life, that kid’s life where you just go on vacation, not have to worry about this and that,” said Marilu Delgado. “I try not to worry about it but sometimes it hits me -- my mom, being undocumented, it gets me scared.”

The Obama administration expanded the DACA program in 2014, including a provision dubbed DAPA - Deferred Action for Parents - to protect undocumented parents of U.S. citizens (who met strict requirements) from deportation, and potentially provide them with a pathway to legal employment and citizenship. Yet the fate of families like the Delgados remains precarious after a Supreme Court tie upheld a lower court injunction against Obama’s immigration reform.

Overall, an estimated 4.4 million undocumented farmworkers and their families would have been eligible for the expanded program but now remain in legal jeopardy. Had the directives taken effect, Adriana Delgado would most likely have gained the right to live and work in the country legally.

“She’s our mother [and] they could just arrest her,” said Marilu Delgado. “And like, what are we gonna do?”