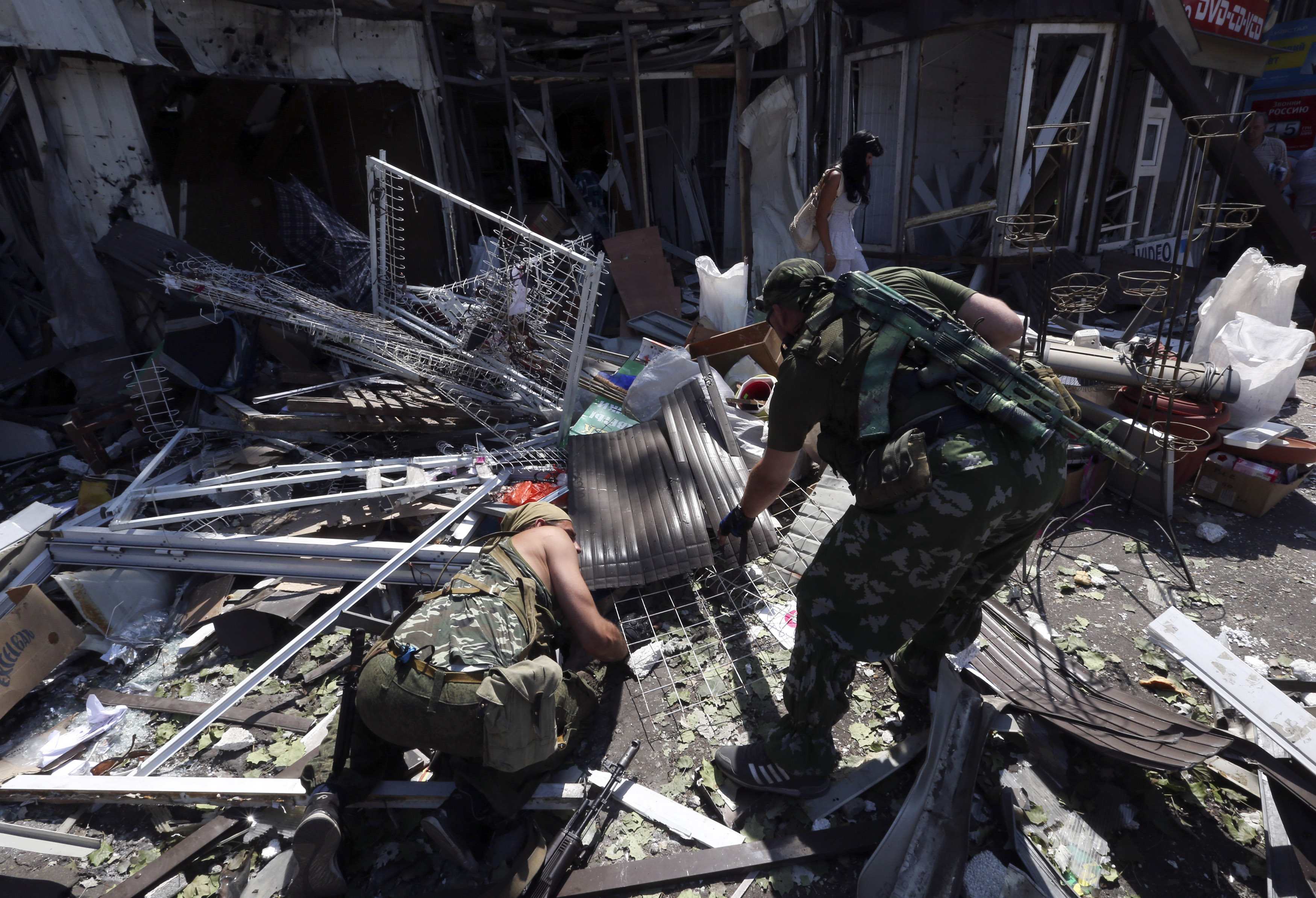 DONETSK, Ukraine -- Airstrikes and artillery fire between pro-Russian separatists and Ukrainian troops in the eastern city of Donetsk have brought the violence closer than ever to the city center, as Kiev's forces move in on the rebel stronghold.

With Ukrainian troops encircling Donetsk, Western leaders have accused Russia of building up forces along the border in what some fear may preface an intervention. On Wednesday, Polish Prime Minister Donald Tusk said he believed that the "the threat of a direct intervention (by Russia) is definitely greater than it was a few days ago, or two weeks ago."

A NATO official said Wednesday that Russia had increased its troop presence along the border by about 5,000 in recent days.

"We're not going to guess what's on Russia's mind, but we can see what Russia is doing on the ground -- and that is of great concern," NATO spokeswoman Oana Lungescu said in a written statement, according to Reuters.

The Donetsk city administration said in a statement published online Tuesday that three people had been killed in shelling overnight.

In the Kalininsky neighborhood only 3 miles east of Donetsk's central square, rebels and civilians were milling around outside after a night of what many said they believed were Ukrainian airstrikes. There were eight craters at the scene that appeared to be the result of aerial bombing.

As the Ukrainian military intensified its campaign against the rebels, heavily populated areas have increasingly come under attack. Kiev adamantly denies launching artillery barrage and air raids against residential neighborhoods and accuses the rebels of firing at civilian areas. They government has offered little evidence to prove their claims, which Human Rights Watch and others have questioned.

"The cities of Donetsk and Luhansk, as well as other cities and residential areas, are not being bombed by Ukrainian military aviation," Lysenko said.

Alexander Pivko, an emergency worker at the scene, didn't believe it. "It was an aerial attack, and two warehouse workers were injured," he said, adding that no one in the neighborhood had been killed.

The only buildings damaged in this industrial neighborhood were a warehouse, a boiler room, and an auto repair shop. But one crater from an explosion was only 10 meters away from a nearby residential building.

"I ran with my two children to hide in the basement after the first strike," said Marina Sibekina, a 30-year-old teacher. "A plane was in the air and in about five minutes a second explosion rang out."

"The rebels built a base here, but we're the ones who suffer," she said.

The Ukrainian government has moved in swiftly on the rebel forces, ousting them from smaller towns in the region and tightening their grip on the regional capital cities of Donetsk and Lugansk.

Donetsk did not see much fighting other than a rebel attempt in May to seize the airport. But the city has come under more shelling in recent weeks, and local authorities estimate that around 200,000 people in the city of 1 million have left their homes. The airport is closed, but buses and trains are still running. The U.N. has estimated that 1,129 civilians have died in the conflict since April.

As the rebels struggle to push back Kiev's forces, the wild card will be whether Russia will come to their rescue. President Vladimir Putin has faced increasing pressure from Russian nationalists urging him to send in the army to back the insurgency, and Western leaders have accused Russia of building up troops along the border with Ukraine.

Russia has denied any build-up on the border, dismissing the claims as Pentagon propaganda and even suggesting the need to counter the claims of military posturing on social media.

"To rule out insinuations about 'a Russian military threat,' (the) Russian Defense Ministry is mulling creation of special accounts in social networks and video hosting resources to bring unbiased information about actions taken by Russian Armed Forces to representatives of the U.S. intelligence community," Defense Ministry spokesman Igor Konashenkov was widely quoted as saying by Russian media.

The Defense Ministry on Tuesday also shrugged off U.S. warnings that an air force exercise in southern Russia this week was adding to tensions, saying that the drills were being conducted hundreds of miles away from the Ukrainian border.