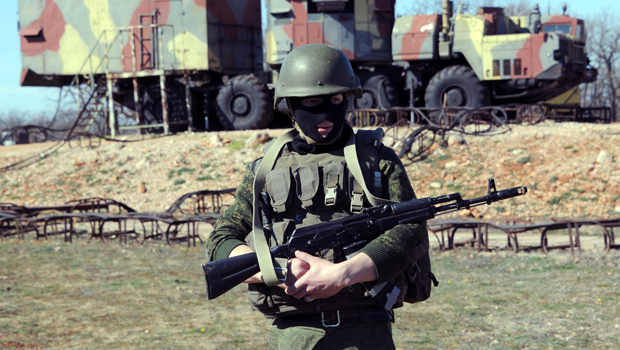 WASHINGTON -- The Obama administration took steps Wednesday to support the defenses of U.S. allies in Europe in response to Russia's takeover of Ukraine's Crimean peninsula.

CBS News national security correspondent David Martin reports that the U.S. this week will send six additional F-15 fighter jets and one KC-135 tanker to augment the four F-15s already part of the mission, according to a defense official.

Martin also reports that Russia continues to reinforce its troops in Crimea, but U.S. intelligence does not believe that the Russians have exceeded the limit of troops they are allowed by treaty to have there, which is 20,000.

Russia routinely keeps between 8,000 and 12,000 troops in Ukraine. Estimates are that Russia sent at least 6,000 more into the country.

In Paris, CBS News correspondent Margaret Brennan reports that U.S. Secretary of State John Kerry was unable to get top diplomats from Russia and Ukraine in the same room or to hold direct talks on Wednesday.

Foreign ministers from Ukraine, Russia and Western nations agreed to continue discussions in the coming days on how to stabilize Ukraine and presented a number of ideas for reaching that goal, Kerry told reporters late Wednesday.

"We agreed to continue intense discussions in the coming days with Russia, with Ukrainians in order to see how we can help normalize the situation, stabilize it and overcome the crisis," Kerry told reporters.

"Don't assume that we did not have serious conversations which produced creative and appropriate ideas on how to resolve this; we have a number of ideas on the table," he said after meetings with counterparts from Ukraine, Russia, Britain and France in Paris.

Ukraine's Foreign Ministry told CBS News that Foreign Minister Andriy Deshchytsia was making his way to Paris' airport Wednesday afternoon after flying in on Kerry's plane from Kiev Tuesday night. Officials say there is still a chance he might stay in an attempt to hold talks later in the week.

Russian Foreign Minister Sergey Lavrov said further discussions would take place "in the days to come." Lavrov and Kerry are expected to meet Thursday in Rome.

"We are all concerned," he told reporters while leaving the French Foreign Ministry.

"We agreed to continue those discussions in the days to come to see how best we can help stabilize, normalize the situation and overcome the crisis," he added.

The hope had been that Wednesday would be the first time for Russia and Ukraine to begin direct talks - a diplomatic breakthrough - since the Russian invasion of Crimea. Deshchytsia - who was a protester in Kiev three months ago - told reporters Tuesday that he expected to meet with Lavrov, but the Russians had not agreed to meet.

On the sidelines of the Paris summit, which was supposed to be focused on Lebanon, Lavrov was approached about the situation in Ukraine by a group of European ministers and Kerry. The conversation was "brief and informal" and included the top diplomats from Germany, France, U.S., U.K. and Lavrov, a senior State Department official told Brennan.

"I urge continued restraint to reserve room for a diplomatic solution," Dempsey told the Senate panel.

While the hearing was supposed to focus on the military's budget, both witnesses quickly addressed the ongoing events in Ukraine.

Since last weekend, Russian troops have taken control of much of the peninsula in the Black Sea, where Russian speakers are in the majority. Moscow doesn't recognize the Ukrainian leadership that came to power after protesters ousted the country's pro-Russian president last month. It has cited strategic interests as well as the protection of ethnic Russians in making its case for intervention.

Hagel said the U.S. was reaffirming its commitment to allies in Central and Eastern Europe, some of whom spent decades in the last century under Soviet domination. European countries are grappling with their own response to the crisis, fearful about moves reminiscent of Russia's Cold War policy of regional hegemony but equally concerned about damaging trade and energy partnerships vital to their economies.

The United States assumed control over NATO's air policing duties over Baltic countries Estonia, Latvia and Lithuania in January. Belgium previously had the four-month rotating duty. The mission "not only protects the integrity of NATO airspace, it illustrates the alliance's core function of collective defense," the 28-nation bloc said in a statement at the time.

As soon as Thursday, the Republican-led House could move forward with a bill that would authorize a loan guarantee to Ukraine. House leaders are also working on a possible bill to issue sanctions against Russia in response to its intervention.

Meanwhile, hundreds of demonstrators waving Russian flags stormed a government building in Donetsk in eastern Ukraine and flew a Russian flag from its roof, hours after Kiev's authorities managed to fly their own flag there for the first time since Saturday.

The region is the home area of Ukrainian President Viktor Yanukovych, who fled the country.

An AP photographer, who was in Donetsk, said more than 2,000 people gathered in the square Wednesday afternoon outside the regional administrative building before groups of men broke through police ranks and smashed their way into the building.