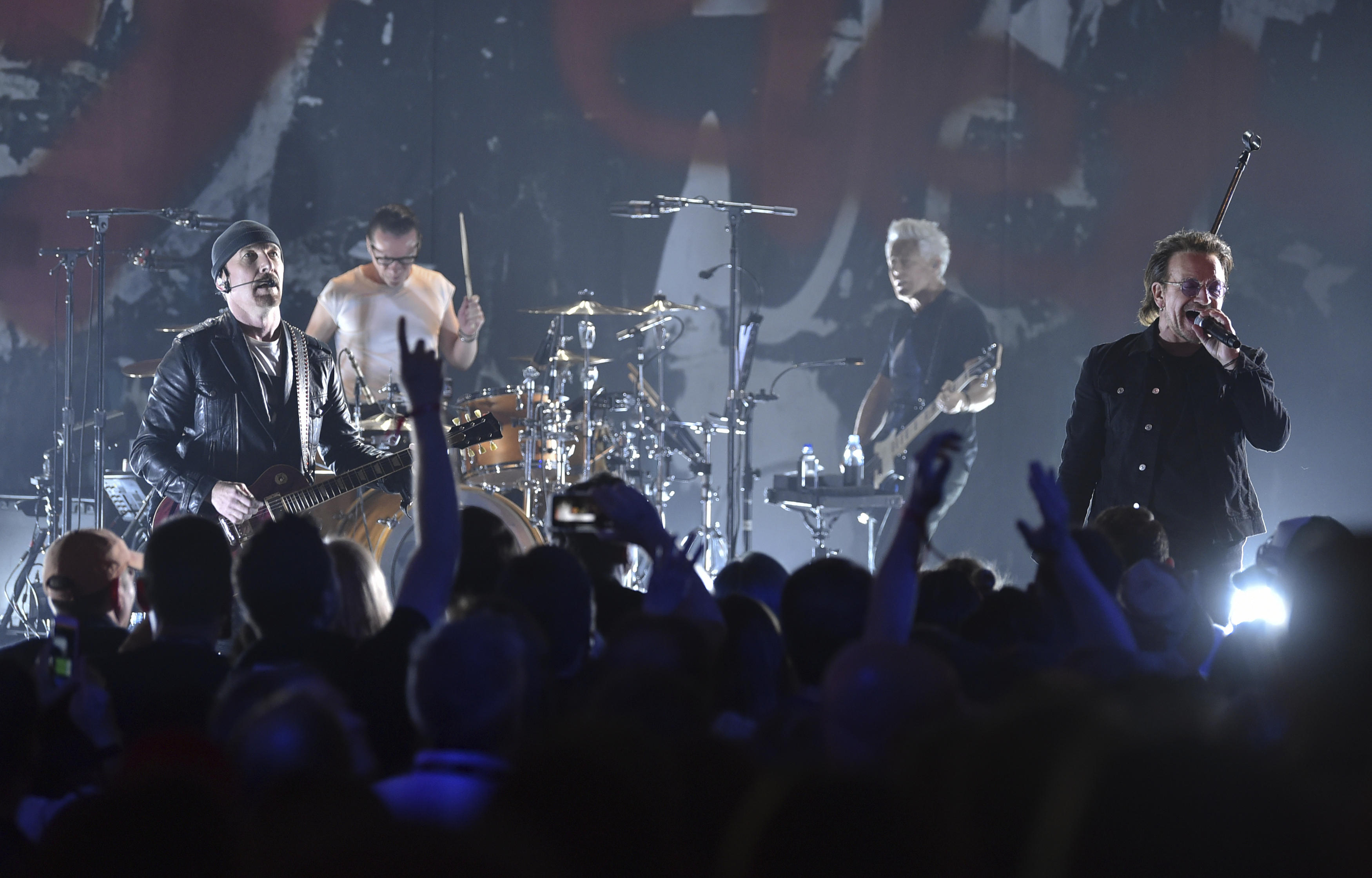 NEW YORK -- U2 frontman Bono honored the late Anthony Bourdain toward the end of the band's special performance at the Apollo Theater in Harlem. Bono spoke of losing a "lot of inspiring, useful people" over the past few years "who  gave up on their own life" alluding to the apparent suicides of musicians Chris Cornell and Chester Bennington, as well as fashion designer Kate Spade.

"And now this great storyteller, who I'm sure has stories he couldn't tell us. So for Anthony Bourdain, and his friends and family this is a song inspired by a great, great, great friend of ours. His name is Michael Hutchence," Bono said Monday night before launching into an impassioned version of "Stuck in a Moment You Can't Get Out Of."

The Grammy-winning song about suicide was written by the band after INXS singer Hutchence was found dead in 1997 of an apparent suicide.

The 61-year old Bourdain was found dead of an apparent suicide last week in France. He had been working on his CNN series "Parts Unknown" at the time.

Bourdain's estranged wife, Ottavia Busia, recently shared a photo on Instagram of their daughter, Ariane, appearing on stage at a music venue in New York.

"Our little girl had her concert today," she wrote. "She was amazing. So strong and brave. She wore the boots you bought her. I hope you are having a good trip, wherever you are."

As for the performance from U2, the band took a break from their Experience and Innocence arena tour to play a special one-night show at the legendary theater for Sirius XM, subscribers. The invite-only show had a star-studded guest list, including Harry Belafonte, tennis legend John McEnroe, rocker Jon Bon Jovi, E-Street band guitarist "Little Steven" Van Zandt, and New England Patriots owner Robert Kraft.

The band ripped through its 90 minute set, covering 18 songs, and maintaining enough energy to keep many of the nearly 1,500 on their feet for most of the night. On the floor, fans waved their arms and sang along from the first chorus of opener, "I Will Follow" to the last encore of "Love Is Bigger Than Anything in Its Way."

Never afraid to play songs from a new album, four came from "Experience." But they also included standards like "Pride (In the Name of Love)," ''Vertigo," and "Desire."

They also dusted off a few gems that have not been heard yet on the tour, including "Angel of Harlem," the band's homage to Billie Holliday. For that one, and a few others, the Sun Ra Arkestra backed them up.

Other songs marking their first tour appearance included, 'When Love Comes to Down," ''Every Breaking Wave," and "Out of Control" from "Boy," the band's 1980 debut album.

Though the concert was only for a select crowd of primarily SiriusXM subscribers, U2 fans can hear it on the band's SiriusXM channel on Wednesday.