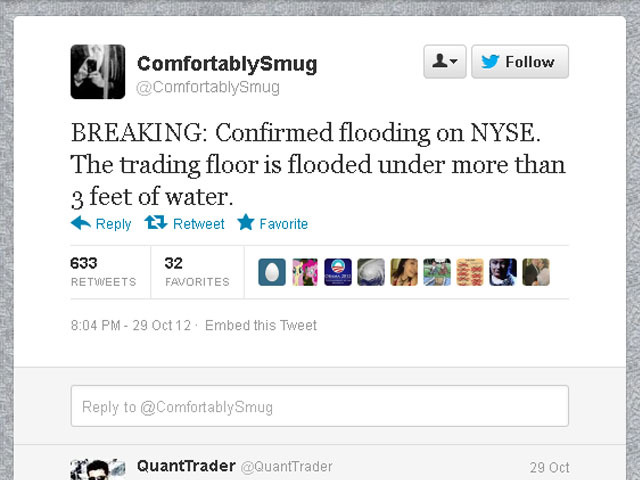 As Superstorm Sandy was pummeling the U.S. East Coast Monday night, people were sending real-time updates through social media sites, giving observers around the world a window into the chaos. But one man sent out several false breaking news alerts that perpetuated a ripple effect of misinformation.

Twitter user @ComfortablySmug sent out inaccurate tweets of events on the ground in New York City Monday night. But the one that got the most attention was a claim that the trading floor of the New York Stock Exchange was under more than 3 feet of water. The claims may not have been initiated by @ComfortablySmug, but the report was re-tweeted several hundred times.

According to BuzzFeed, Tripathi penned several comments on NYMag.com, and even wrote a candid sex diary entry on the website under the same Twitter handle.

In a tweet posted to his Twitter followers Wednesday, Tripathi apologized for making a series of "irresponsible and inaccurate tweets." He also reported that he has resigned from Wight's campaign.

The Storm after the Storm
More
View CBS News In
CBS News App Open
Chrome Safari Continue
Be the first to know
Get browser notifications for breaking news, live events, and exclusive reporting.