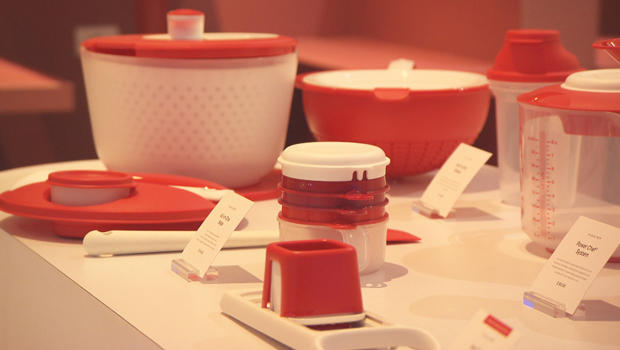 Tupperware parties are a blast from the past if there ever was one. If you were wondering whether Tupperware still exists, and if they even have those parties anymore, the answer is an emphatic yes.

But the parties are a lot more fun now, at least the one Corinne Brown threw last Sunday outside Charlotte, N.C. was.

"Literally I have been in Tupperware my whole life," Brown said. "My mom was promoted to Tupperware manager right before she gave birth to me. I was born, raised, and burped in Tupperware."

"Burped"?  Yup, the bowl that burped began it all.

Earl Tupper had paint can lids in mind when he invented the Tupperware seal just after World War II. Believe it or not, lightweight, unbreakable plastic containers were revolutionary then. Unfortunately, too revolutionary. At first, nobody bought Tupperware.

Enter Brownie Wise, who sold so much Tupperware by demonstrating the products to groups of friends that Earl Tupper hired her and turned her loose to transform the whole business of home sales.

She was a superstar, the first woman on the cover of Business Week, a glamorous role model for the army of women (and it was mostly women) who made money, even supported their families as the stay-at-home moms their husbands expected them to remain in the 1950s.

Brownie Wise built their confidence and rewarded their success. It was women's empowerment by stealth.

Tupperware brands runs according to her playbook to this day … which is good and bad. The stock price has tanked; the CEO just quit.

The company has opened a holiday pop-up shop in a trendy part of New York City. In spite of a worldwide sales force of more than three million in 84 countries, the challenge is reaching people who buy cheaper containers in the supermarket, and think of Tupperware as "yesterday," if they think of Tupperware at all.

"They don't know how to find us, and that's the first question anyone asks us," said Asha Gupta, head of marketing and strategy for Tupperware.

Correspondent Martha Teichner asked, "Why should they buy Tupperware instead of this aisle of stuff in the supermarket?"

"Once they start using our products, realize the worth of it," said Gupta. "The products last a very, very long time."