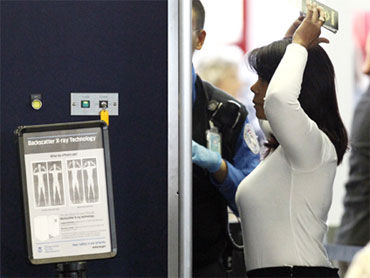 Pilots traveling in uniform on airline business will be allowed to pass security by presenting two photo IDs, one from their company and one from the government, to be checked against a secure flight crew database, officials at the pilot groups said.

"This looks good. It's basically what we've been after for 10 years," says Sam Mayer, a spokesman for the Allied Pilots Association at American Airlines, the union that raised objections to the new screening process about two weeks ago. "Pilots are not the threat here; we're the target."

TSA said in a news release Friday that pilots would begin seeing changes immediately in security screening, but did not specify what they would be.

But in a press release lauding the new policy, the Coalition for Airline Pilot Associations, a trade organization for pilot unions, described the changes as follows:

"While a nationwide sterile area access system for pilots is being phased in, pilots traveling in uniform on airline business will see immediate modifications to their checkpoint screening process due to their trusted status. Eligible pilots must work for a U.S. carrier, be traveling in uniform, and on airline business. Pilots will enter the secure area after presenting their airline-issued identification and another form of identification to Transportation Security Officers (TSOs). TSOs will check credentials against a secure, real-time airline flight deck crewmember database, which includes a picture and other information to verify the individual's employment status."

It is an expansion of a program tested at three airports, the organizations said.

The decision comes amid recent outrage over invasive pat-downs and full body imaging machines used for screening at airports.

The TSA's new stance on pilot screening comes amid a nationwide uproar about new invasive screening procedures for passengers, who at many airports must choose between a full-body scan machine that creates a detailed image of their naked body or an embarrassing pat-down in which the screener uses his full hands on the breasts and genitals.

The scanners use "backscatter" X-ray technology to detect both metallic and non-metallic threats, including weapons and explosives, under a passenger's clothing. They are now deployed at 68 airports in the U.S.

A recent CBS News poll found that 4 out of 5 Americans approve of the use of full-body digital X-ray machines. But that fifth American is plenty mad.

Some travelers are using the Internet to organize protests aimed at the busy travel days next week surrounding Thanksgiving.

Brian Sodergren, 33, of Ashburn, Va., is calling for Wednesday, November 24, to be National Opt-Out Day, and urges all air travelers to opt-out of the full-body scanning, undergoing an enhanced pat-down instead.

Interest in the opt-out movement has grown since John Tyner, a California man who resisted a full-body scan and groin check at the airport, became an Internet sensation when a video circulated of him telling a TSA agent, "If you touch my junk, I'll have you arrested."

His confrontation (which ended with his being thrown out of the airport Saturday after being threatened with a fine and lawsuit) spawned online sales of T-shirts, bumper stickers, hats and even underwear emblazoned with the words, "Don't Touch My Junk!"

Wewontfly.com also urges people to refuse to consent to the TSA's new procedures, or better yet, just don't fly at all on November 24.

As far as health safety, the TSA said radiation from one scan is vastly lower than from a single dental X-ray.

"We are confident that full-body X-ray security products and practices do not pose a significant risk to the public health," officials from the Food and Drug Administration and the TSA wrote in a letter last month to White House science adviser John Holdren.

Yet ripples of concern have surfaced among some passengers fearful about excess radiation, among some flight crews already overexposed to radiation in the air and even among a few scientists.

"The thing that worries me the most is what happens if the thing fails in some way" and emits too much radiation, said Arizona State University physics professor Peter Rez.

The risk for failure is higher than in a medical setting because the machines are operated much more often, and by TSA workers without medical training, Rez said.

Paul stated, "The solution to the need for security at U.S. airports is not a government bureaucracy. The solution is to allow the private sector, preferably the airlines themselves, to provide for the security of their property."