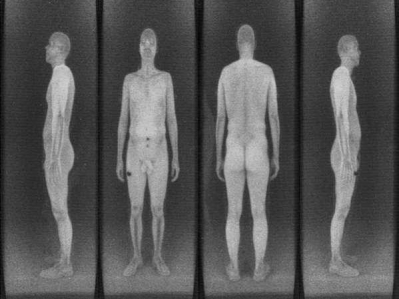 (CBS) Should John Tyner - the airline passenger shown resisting a security pat-down in the now-infamous "Don't touch my junk" video - be worried about more than touchy-feely security guards?

A small, but growing, group of scientists is now saying that low levels of radiation emitted by airport body scanners might be the bigger concern - not our naked junk.

The U.S. Food and Drug Administration acknowledges that the X-ray technology used in the scanners poses a cancer risk, albeit one they say is "so low it presents an extremely small risk."

"A person receives more radiation from naturally occurring sources in less than an hour of ordinary living than from one screening with any general-use X-ray security system," writes FDA Engineer Daniel Kassiday.

That sounds reassuring, but there have been no studies to date indicating what repeated exposure to the X-rays means to frequent air travelers.

In May, four scientists from the University of California San Francisco wrote to the White House Office of Science and Technology Policy expressing concerns that the scanners might expose the skin to high doses of X-rays that could increase the risk of cancer and other health problems, particularly among older travelers, pregnant women and people with weak immune systems, wrote the Los Angeles Times.

Even before that, Bloomberg News got its hands on an Inter-Agency Committee on Radiation Safety (IACRS) report, in which the agency said that pregnant women and children should not be subject to scanning, even though the radiation dose from body scanners is "extremely small."

Governments were advised to consider "other techniques to achieve the same end without the use of ionizing radiation," Bloomberg reported.

Frequent exposure to low doses of radiation can lead to cancer and birth defects, according to the U.S. Environmental Protection Agency. But how much is too much?

The good news is most of the body scanners deliver less radiation than a passenger is likely to receive from cosmic rays while airborne, according to the IACRS.

As for Tyner, his videotaped refusal to let TSA officials scan him or pat him down has made him a bit of a folk hero. But long after his 15 minutes of cable news fame have expired, Americans will have to consider whether they want to get zapped by body scanners or get used to having TSA officials touch their junk.