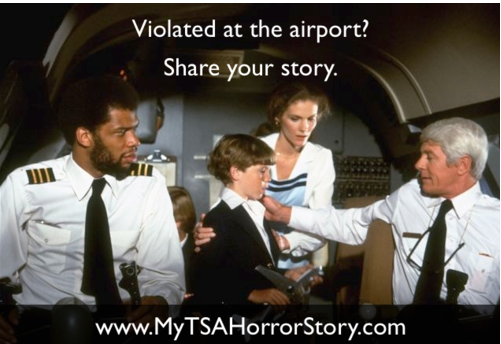 The Transportation Security Administration has been under attack for its latest full body scan, which many are claiming is an invasion of privacy.

The full body scan reveals a person's naked body. While the TSA has promised the images get deleted, images taken by the U.S. Marshall service at a Florida courthouse were leaked from a scanner. On Tuesday, Gizmodo revealed 100 of the images that had been saved in the Florida courthouse scanner.

Highlighting and inflaming the debate, two bloggers posted detailed accounts of their experiences at airport security.

Only a day later, John Tyner took to his blog to share an encounter he had at the San Diego Airport, which he captured with his phone:

" She described to me that because I had opted out of the backscatter screening, I would now be patted down, and that involved running hands up the inside of my legs until they felt my groin," Tyner wrote.  "I stated that I would not allow myself to be subject to a molestation as a condition of getting on my flight. The supervisor informed me that it was a standard administrative security check and that they were authorized to do it."

Michael J. Aguilar, chief of the  San Diego TSA office said on Monday that Tyner may be subject to prosecution and civil penalties of up to $11,000.

"The bottom line is, if somebody doesn't go through proper security screening, they're not going to go on the flight," TSA head honcho John Pistole told CNN on Monday.

Their stories have caused a surge of reactions with a site MyTSAHorrorStory.com allowing you to upload your own story or read others.

The new security measure at airports are in part a response to the attempted Christmas Day bomber last year. In a recent CBS News poll, 81 percent of respondents said they are in favor of full-body X-rays.

Pistole defended the new patdown procedure before a congressional committee Tuesday. He said a very small percentage of people receive a patdown, and screeners are trained to follow specific procedures, similar to those practiced in European airports.  People who refuse to go through the image scanner may receive the patdown.

"We want to be sensitive to people's sensitivity to privacy and their being while ensuring that everybody is secure on every flight," Pistole said.

What do you think- assault, invasion of privacy or is this what we need to sacrifice for our safety? Leave a comment below.