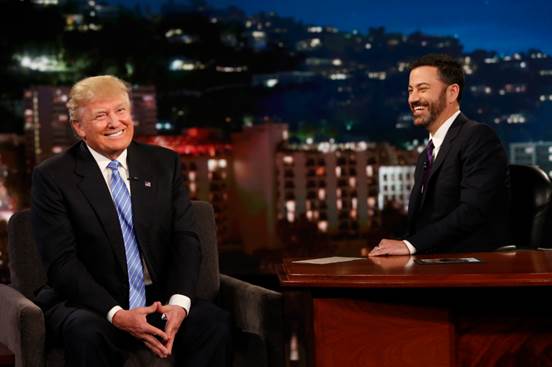 Before hitting a private fundraiser in Los Angeles, Donald Trump taped a guest appearance on ABC's "Jimmy Kimmel Live," where he fielded questions from the late-night host on a range of topics -- including transgender bathrooms, and whether he'd debate Bernie Sanders.

Kimmel asked Trump if he'd be willing to debate Sanders, given that Hillary Clinton had turned her primary opponent down for a California debate. Trump declared he would -- as long as the proceeds go to charity.

As he accepted the hypothetical debate, Trump asked, perhaps jokingly, how much Sanders would be willing to pay him -- for charity -- then conceded that it would be fine if a network were willing to put up the money. Trump also said he has never met Sanders.

Multiple sources told CBS News Thursday morning, however, that the presumptive nominee was just kidding about debating Sanders -- it will never happen, they said.

Sanders took to Twitter right away with his response:

"There have been a few discussions," Weaver said of scheduling a debate, adding that the talks were "preliminary." Still, he said, "We have heard from, I think, every network."

Trump didn't appear to be joking when he said at a press conference later Thursday that he'd be willing to debate Sanders for a price -- $10 million.

When Hillary Clinton was asked later in the day about the possibility of a Sanders-Trump debate before California's June 7 primary, she said that she thought it was "a joke" and said she looked forward to debating Trump.

In addition to debate talk, Kimmel persisted in trying to get Trump to disclose his personal opinion about what the policy should be on transgender bathrooms. When North Carolina passed a law requiring people to use bathrooms corresponding to the gender assignments they were born with, Trump seemed to of the opinion that North Carolina should have just left well enough alone, noting that the move could hurt businesses in the state.

Within days, though, Trump had come around to the stance that states should decide, which he reiterated more than once on the show, saying more than once a variation on "I say let the states decide."

Asked what he thought "the right thing" was, Trump said, "I don't know yet...Honestly, I don't know."

"Would you say though, if you were voting personally or a member of New York state, you would vote for the - that right," Kimmel asked.

"[The] party generally believes what whatever you're born , that's the bathroom you use," responded Trump.

The Associated Press reports that, before the taping, R&B singer The Weeknd and rapper Belly, both Oscar-nominated musicians, canceled their scheduled performance after learning that Trump would also be appearing. Belly said he canceled because he didn't want to share a stage with Trump.