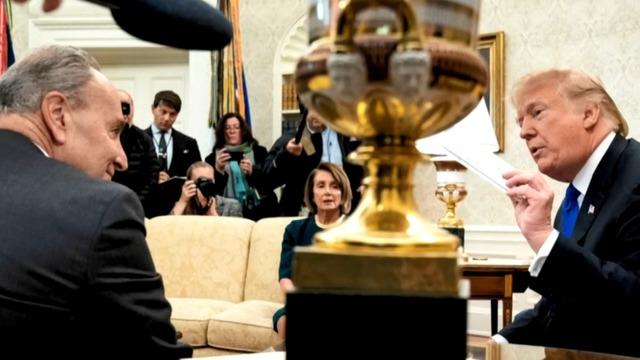 After a phone conversation with the Mexican president Wednesday, President Trump asserted the next day that Mexico would pay for a border wall, a promise he often made on the campaign trail. The Mexican president, however, denied that the two discussed wall funding during their call, which was about immigration.

"I often stated, 'One way or the other, Mexico is going to pay for the Wall.' This has never changed. Our new deal with Mexico (and Canada), the USMCA, is so much better than the old, very costly & anti-USA NAFTA deal, that just by the money we save, MEXICO IS PAYING FOR THE WALL!" Mr. Trump wrote on Twitter Thursday morning, suggesting that the money saved by the newly negotiated U.S.-Mexico-Canada Trade Agreement would be tantamount to Mexico paying for a border wall between the two countries.

Mr. Trump and Mexican President Andres Manuel Lopez Obrador discussed illegal migration from Central America to the United States, as waves of immigrants seeking asylum approach the southern border. Lopez Obrador said Thursday morning that the topic of funding for a border wall was not discussed "in any conversation."

"It was a respectful and friendly conversation," Lopez Obrador said, according to Reuters. Mexico has previously bristled at the idea that it would be responsible for the funding of a border wall, which has been a point of contention between the two countries.

Mr. Trump's preoccupation with the wall has been evident during a domestic fight with Congress over wall funding in government appropriations measures that face a deadline in the next two weeks. Mr. Trump is requesting $5 billion for the wall, but Democrats will only commit to $1.6 billion. At a combative Oval Office meeting with Democratic congressional leaders on Wednesday, Mr. Trump said that he would bear responsibility for shutting down the government if he does not get sufficient funding for the wall.

The funding for agencies such as the Department of Homeland Security, the Justice Department and the State Department runs out on Dec. 21, days before Christmas.

"The president has the White House, he has the Senate, he has the House of Representatives, all in Republican control," House Democratic Leader Nancy Pelosi said after the meeting on Wednesday. "He has the power to keep government open. Instead, he has admitted in this meeting that he will take responsibility, the Trump shutdown is something that can be avoided."