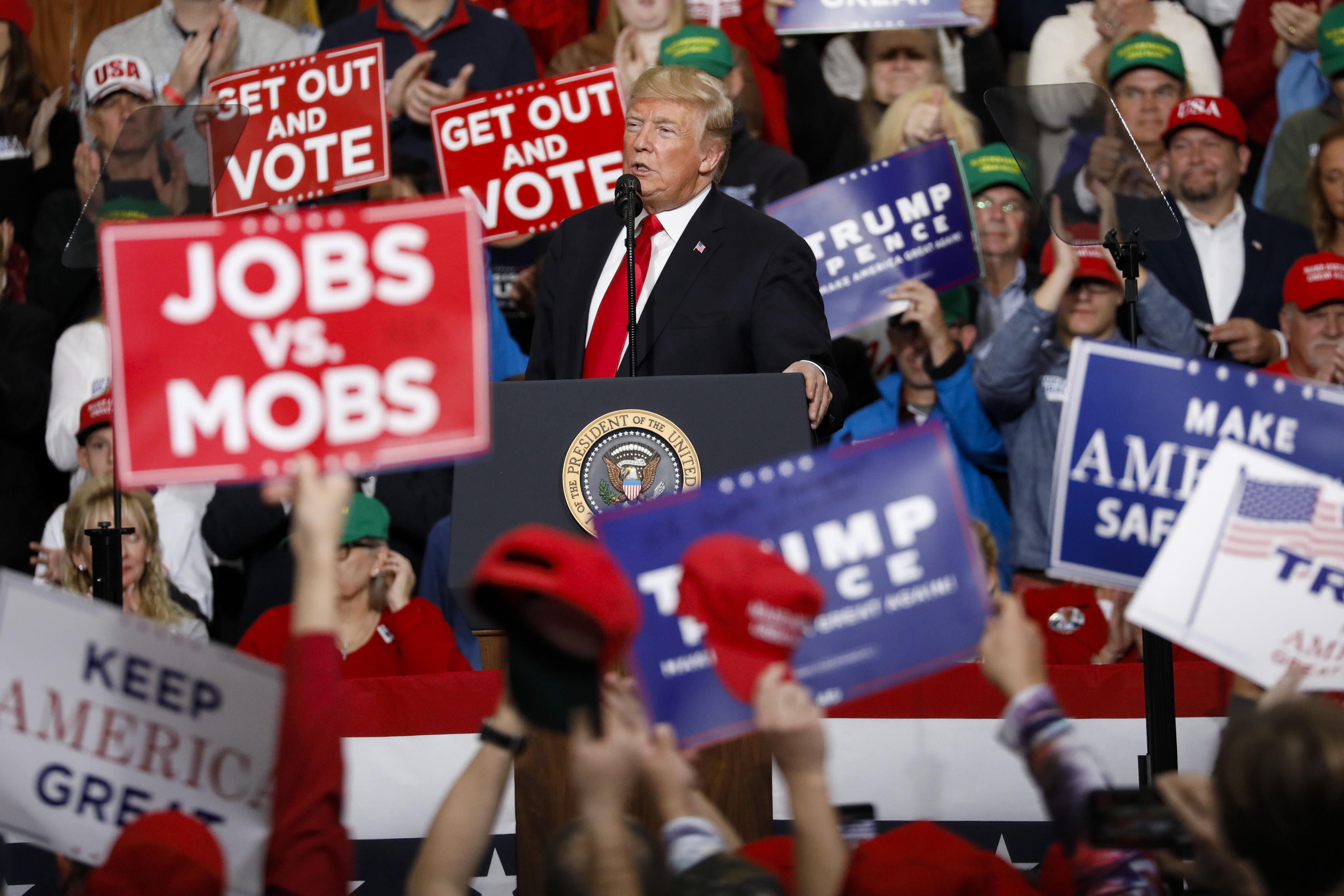 At a rally in Belgrade, Montana, Saturday afternoon, President Trump suggested that each of the women who had accused now-Supreme Court Justice Brett Kavanaugh of sexual misconduct were lying.

The president discussed a woman who had written a letter to Sen. Kamala Harris accusing Kavanaugh of sexual assault before he was confirmed, and who recanted her story this week. Senate Judiciary Committee Chairman Chuck Grassley referred her to the FBI for an investigation.

"It was a lie. It was a total lie. It was fake," Mr. Trump said of the woman's story, pointing to the media when he said "fake." "About rape, she lied. And we're supposed to sit back and take it."

"What about the others? When are they going to say what happened?" he asked, referring to Kavanaugh's other accusers. One of them, Dr. Christine Blasey Ford, testified before the Senate about her allegations. None of the other women who have accused Kavanaugh of sexual misconduct have recanted. Mr. Trump also said he was glad that he had supported Kavanaugh throughout the confirmation process, decrying what would have happened if "he dropped out because of a filthy dirty lie."

"Supposing because of these lies and this lie -- these lies, by the way, these lies. But this lie -- supposing he dropped out? A lot of guys would have," he said.

The president was in Montana to rally for Republican candidates, particularly Senate candidate Matt Rosendale, who is challenging Democratic Sen. Jon Tester. This is the first of two rallies Mr. Trump is attending on Saturday; he will travel to Florida for a rally in the evening.

Mr. Trump has personal animosity toward Tester, as the senator was instrumental in torpedoing the nomination of Dr. Ronny Jackson for secretary for Veterans Affairs, due to allegations of substance abuse while working. However, at a rally in Montana in October, he acknowledged that Jackson "didn't really want it. And he might not have been qualified." Mr. Trump mentioned Jackson and his animosity towards Tester again on Saturday.

"He tried to destroy him. And I've never forgotten it," he said about Tester's skepticism about Jackson's background, adding that it was a big reason he was in Montana rallying against him. Mr. Trump has visited Montana four times during this election cycle. The president also expressed regret about nominating Jackson even though he didn't necessarily want the post, saying, "I feel guilty because I'm the one who said, 'you should do it.'"

During his Montana rally Saturday, Mr. Trump made a speech similar to others he has made this week, beginning by touting economic progress. He said that the media would never discuss low unemployment and other economic gains, but instead would focus on "Russia."

"'We won't say that she was a lousy candidate, and we won't say certainly that he was a good candidate,'" Mr. Trump said, mimicking reporters, suggesting that reporters would rather blame Russia on Mr. Trump's presidential win than say he was a better candidate than Hillary Clinton.

He later discussed the "Russia hoax," referring to the investigation into Russian meddling in the 2016 election. This is the first time Mr. Trump has broached that topic in weeks.

Rosendale took the stage at one point, and urged Trump supporters to vote even though the president is not on the ballot. "He may not be on the ballot this year, but his policies are," he said.

The president has largely focused on illegal immigration in the days before the election, a topic that could motivate Mr. Trump's base to turn out and vote in the midterms. At the rally in Montana, the president repeated familiar rhetoric about immigration, and particularly a migrant caravan en route to the U.S. from Central America that is weeks away from arriving at the border.

"The Democrats want to invite caravan after caravan," Mr. Trump falsely said, a word-for-word repetition of a phrase he used at the rally in Indiana on Friday. He also criticized El Salvador and Honduras for allowing the caravan to travel to the border, and repeated that he was cutting off aid to those countries.

"Barbed wire used properly can be a beautiful sight," he said, to laughter. He also accused illegal immigrants, without evidence, of undertaking the worst human trafficking campaign in history, arguing that "you'd think it would have died out 300 years ago." African slaves were trafficked to North and South America during that time frame.

"It's the worst it's ever been because of computers and the internet," Mr. Trump said about trafficking.

The president addressed criticism that he was discussing immigration issues instead of focusing solely on the economy.

"The networks may criticize me. "Why doesn't he talk about the great economy?" Well I just did. But we have to talk about the problems," he said. Mr. Trump added that if he only discussed the economy at rallies, "I can only go four or five minutes with that stuff" before attendees would leave.

Mr. Trump is also in Montana to support of Republican Rep. Greg Gianforte. Mr Trump has praised Gianforte for body slamming a reporter in 2016 while also continuing his line of attack that voting for Democrats is voting for a "mob." "Any guy who can do a body slam, he's my candidate, he's my guy," Mr. Trump said at a rally in October.

Gianforte pleaded guilty to assaulting a Guardian reporter in June 2017, the day before the state's special election. Mr. Trump's comment elicited cheers from the crowd.

Mr. Trump's goal in these rallies is to turn out Republican voters. Outwardly, the president is optimistic about whether Republicans will keep control of the House, but he hedged that optimism before heading to a rally in West Virginia Friday afternoon.

"It seems that the campaign is doing very well," Mr. Trump told reporters on the White House South Lawn Wednesday. "Looks like we're doing very very well in the Senate. A lot of seats that were not really being thought of in terms of victories a year ago now look like they could very well be victories. The House is a lot of people, I mean there are a lot of people, and I think we're going to do well in the house also. But I know we're doing well in the Senate but we're doing OK in the House, we're going to have to see. There are just so many people."

Many Republicans would like the president to keep his focus on the booming economy, and things like tax cuts, but while Mr. Trump mentions his economic accomplishments during campaign appearances, it's not a focal point of his rallies. "Sometimes it's not as exciting to talk about the economy because we have a lot of other things to talk about," he said at the rally in West Virginia.

On Thursday, he delivered remarks in the Roosevelt Room claiming his administration is finalizing plans to deny asylum other than at designated points of entry along the border, and saying he will sign an executive order next week. The president has continued to rail against the caravan, and said he may deploy up to 15,000 troops to deter the migrants, most of which are seeking asylum. He also said he will end birthright citizenship through executive order or Congress, claiming the 14th Amendment doesn't cover birthright citizenship.