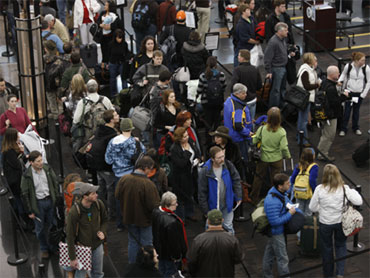 Airline passengers heading to the United States met increased security screening Monday in airports around the world following U.S. requests for stricter checks after a Nigerian man allegedly tried to ignite explosives on a flight to Detroit.

Pakistan's national airline said it was intensifying security checks for U.S.-bound passengers, even though there are no direct flights to the States from Pakistan. Screening was also stepped up for those flying to the U.S. from other parts of Asia and the Middle East.

There will be no exceptions for passengers coming from 14 countries the U.S. considers to be sponsors of terrorism or other "countries of interest," reports CBS News Correspondent Manuel Gallegus.

The new rules specifically focus on passenger coming from:

But even with ramped up security, technology and targeting foreign travelers, experts say it's still difficult to stay one step ahead.

"Sophisticated terrorists will just choose another port of entry," Schiavo told Gallegus. "There are thousands of airports around the world, and literally thousands that serve the United States."

"It is beyond my imagination what more they could do," said Nadim Umer, 40, a Karachi-based linen merchant who said he was subjected to a strip search when he arrived in New York last June. "Those who are dying to go to America at any cost can put up with all this inhuman behavior, but I cannot."

Meanwhile, there were few visible changes on the ground in Europe, which has thousands of passengers on hundreds of daily flights to the United States.

Large hubs such as London, Paris, Amsterdam and Frankfurt alone account for 20-30 trans-Atlantic flights a day each.

In Britain, a major international transport hub, a spokesman for the Department of Transportation said he was still trying to decipher the practical implications for Britain of the new U.S. rules. He refused to give his name due to the sensitivity of the subject.

However, the International Air Transport Association, an umbrella group representing 230 airlines, welcomed the changes. The new measures were "definitely a step in the right direction," Singapore-based spokesman Albert Tjoeng said in a statement.

"We will be working closely with airlines to determine the operational impact of the amended rules. Our aim is to improve security while reducing the hassle factor to passengers," said Tjoeng.

The new measures follow the arrest of a Nigerian man, Umar Farouk Abdulmutallab, who allegedly tried to set off an explosive device on a flight from Amsterdam to Detroit on Christmas Day.

Sen. Charles Schumer said airlines based in the United States should threaten to stop flying to airports with lax security.

Schumer wrote to the heads of major airlines on Sunday asking them to report any known security issues at foreign airports. He said the airlines should threaten to stop flying to those airports if security isn't improved.

U.S. authorities also announced as of Monday, anyone traveling from or through nations regarded as state sponsors of terrorism - as well as "other countries of interest" - will be required to go through enhanced screening. The TSA said those techniques include full-body pat-downs, carry-on bag searches, full-body scanning and explosive detection technology.

Sultan Hasan said the passengers are subjected to special screening, including full body searches, in a designated area of the departure lounge. He said the airline had run advertisements in newspapers to warn prospective passengers of the increased safety measures.

The TSA said the ability to enforce the new security measures is the "result of extraordinary cooperation from our global aviation partners."

Pervez George, spokesman for Pakistan's Civil Aviation Authority, said the CAA was maintaining strict security standards at all airports for all flights.

"We are already carrying out all possible security arrangements at our airports which can be compared with any Western airport," George said. "Safety of the airliners and passengers as well as security at the airports is a top priority and we are maintaining it irrespective where the flight is going."

In South Korea, an official at Seoul's Incheon International Airport, Lee Ji-hye, said U.S.-bound passengers are now required to go through additional security before boarding their flights, and security officials also compile a list of "suspicious" passengers to monitor after taking into consideration their nationalities, travel patterns and the timing of ticket purchases.

Australian Transport Ministry spokeswoman Moksha Watts said all passengers flying to the U.S. would continue to be patted down and have all their cabin luggage searched.

Airport authorities in the Philippines said the U.S. had not requested any additional security screening procedures but all U.S.-bound passengers were already subjected to stricter checks.

"That has been in place for quite some time. The last time it was revised and audited was middle of last year," said Manila international airport manager Alfonso Cusi.

In Thailand, Kannika Dechatiwongse, head of Department of Aviation Security Standards, said as of Dec. 26 Thai Airways International had implemented all TSA directives, including a 100 percent pat down and second screening of all passengers.

In the Middle East, a security official at Cairo's airport said EgyptAir and Delta were cooperating to implement the new measures.

The official, speaking on condition of anonymity because he was not authorized to talk to the media, said during the last hour of the flight, crews were ordered not to inform passengers about the location of the plane and passengers would not be allowed to leave their seats.

Special attention would be given to passengers coming from Yemen, Nigeria and some other countries, especially those in transit, the official said.

Baghdad's International Airport already has extremely tight security in place, with passengers having their luggage sniffed by dogs and getting patted down before entering the airport.

"Our security procedures at the airport are more intensified than that in any other airport in the world," said security official Umran Idris.

Maayan Malkin, spokeswoman for Israel Airports Authority, declined to discuss security arrangements. The Ben-Gurion International airport is considered one of the safest in the world.