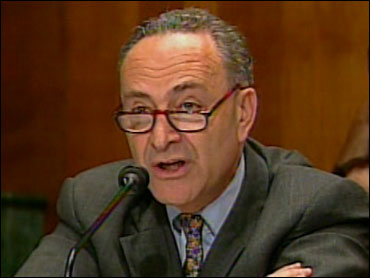 Sen. Charles Schumer said Sunday that airlines based in the United States should threaten to stop flying to airports with lax security.

Schumer, D-NY., said the foiled terrorist attack aboard a Detroit-bound jetliner on Christmas Day "should be a wake-up call" to the federal government and the aviation industry.

Umar Farouk Abdulmutallab, a 23-year-old Nigerian man, has been charged with attempting to bomb a Northwest Airlines flight as it approached Detroit from Amsterdam.

The near-miss attack has prompted President Barack Obama to order a review of what intelligence information the government had about Abdulmutallab and why it wasn't shared with the appropriate agencies. He also ordered a review of U.S. aviation security.

He said he wrote to the heads of major airlines on Sunday asking them to report any known security issues at foreign airports.

"You don't have to be Albert Einstein to realize that flights that originate in foreign countries pose a greater danger," he said.

Schumer said the airlines should threaten to stop flying to those airports if security isn't improved.

In a news conference at his Manhattan office, Schumer released a five-point plan to close what he called "gaping holes" in air security.

He said tough penalties should be implemented against countries that do not comply sufficiently with U.S. airport screening standards.

"What's crucial is that we immediately send many more of our TSA agents to the airports to check on their compliance," he said, referring to the federal Transportation Security Administration.

The TSA said Sunday that passengers flying into the U.S. from or through nations that are "state sponsors of terrorism" or other "countries of interest" will be required to go through enhanced screening. The agency also mandated "threat-based" and random screening for passengers on U.S.-bound international flights.

The changes were slated to go into effect on Monday.

Schumer said the changes were "a good start," but said more needed to be done.

In addition, Schumer said the State Department and the National Counter Terrorism Center should require an expedited review of all travel visas for anyone who has been added to any of the major terrorist databases.

Also on Sunday, Mr. Obama's top counterterrorism adviser said U.S. intelligence agencies did not miss a "smoking gun" that could have prevented the alleged attempted attack.

White House aide John Brennan cited "a number of streams of information" - the suspect's name was known to intelligence officials, his father had passed along his concern about the son's increasing radicalization - and "little snippets" from intelligence channels.