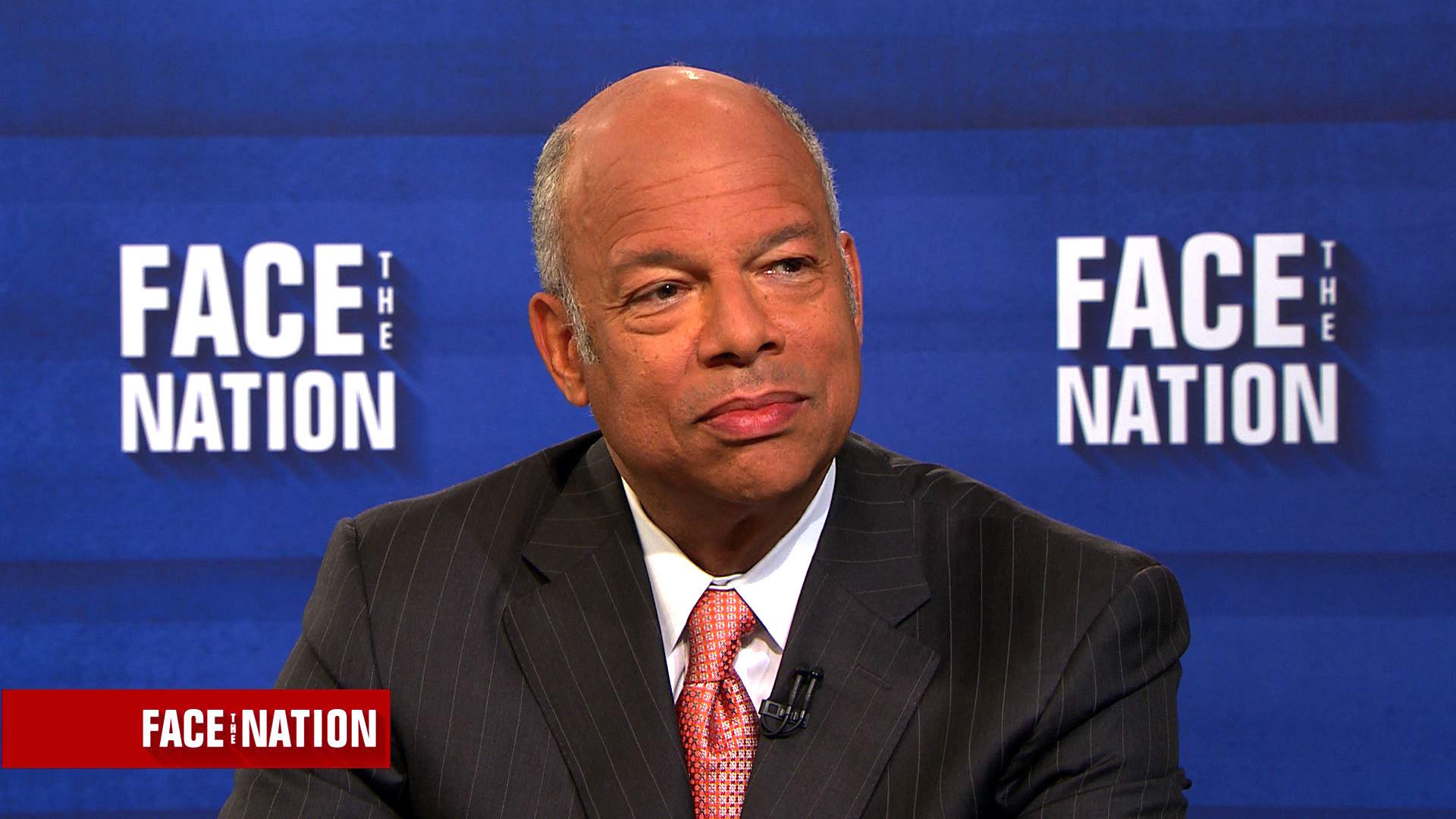 Former U.S. Secretary of Homeland Security Jeh Johnson was at the center of the Obama administration's response to Russian election interference in 2016.

On Sunday, "Face the Nation" sat down with Johnson to discuss the presidential election, cybersecurity -- and more.

A transcript of the interview with Johnson follows.

JOHN DICKERSON: And welcome back to "Face the Nation." We turn now to President Obama's Homeland Security Secretary, Jeh Johnson. Welcome, thanks for being here.

JEH JOHNSON: John, thanks for having me on the show.

JOHN DICKERSON: Let's start, President Trump is in need of a new Homeland Security Secretary. What should he be looking for in the new person?

JEH JOHNSON: Well, I won't recommend anyone in particular, but three things come to mind. First, DHS is the third-largest cabinet-level department of our government, but it is the most decentralized, ranging from aviation security, immigration, maritime security, Secret Service, FEMA, and counterterrorism, of course. We need to continue the management reforms that I and others initiated in the last term.

I know John was very dedicated to that. I hope the next secretary is dedicated to that. Also, we need a national champion and a national spokesperson when it comes to cybersecurity. DHS is charged with the cybersecurity mission and cybersecurity has become, in my judgment, the other cornerstone of the department's missions, along with counterterrorism. So we need someone to champion and drive cybersecurity policy for the government, and we need to continue to focus on countering violent extremism here in the United States. And that was something I spent a lot of time on, and I know John Kelly was very dedicated to it as well.

JOHN DICKERSON: So, John Kelly, you talked to him. You know him. How do you think he'll do as chief of staff?

JEH JOHNSON: Well, judging by the first five business days, so far so good. John is - John is a Marine. And he is dedicated to his commander in chief's mission, whatever that mission may be. I don't believe John is a political animal, he, he - he accepts the mission and he follows it and will do it energetically.

JOHN DICKERSON: Let me look back at - at the Russia question. And at the - you put out a statement in October of 2016 --

JOHN DICKERSON: -- letting the country know of declassified information. Were you surprised at the reaction to that information, that it wasn't stronger?

JEH JOHNSON: Good question. Here's what I was surprised at: Jim Clapper and I issued that statement on October 7th. Friday, October 7th, 2016. A lot of things happened on Friday, October 7th, 2016, including the release of that Access Hollywood video, the very same day. So when we were drafting that statement, we thought, "This is unprecedented that the United States Government is accusing a superpower of interfering in our elections." But it was literally below-the-fold news that day because of the release of the Access Hollywood video, so it did not at the time get the attention that I and others thought it would and should.

JOHN DICKERSON: But there were other days after that between then and the election.

JOHN DICKERSON: Had people gotten complacent about Russia at that point in?

JEH JOHNSON: No. I don't think "complacency" is the right word. I think that in the heat of the campaign, there were a lot of things going on, a lot of charges back and forth. We thought it was critical that the American voter and the American people know that there was a superpower attempting to put his thumb on the scale of our American elections before the elections occurred, so that the American people could know what was behind a lot of the activity that we were seeing. There's still, however, a threat out there to our election infrastructure that this administration needs to address.

JOHN DICKERSON: Do you wish you'd done more in retrospect?

JEH JOHNSON: A lot of people like to ask those questions like that. Anytime you take on a tough issue, people say, "Should you have done more? Should you have done it sooner? Should you- Why did you do it at all?" And I know that in the summer/fall run-up to the election, this was a front-burner item for me, for the president, for our intelligence community. We took actions in the fall and in the last few days of the administration. Now, it's on the next administration to carry forward a lot of the things that we did.

JEH JOHNSON:The Department of Homeland Security very much was on alert on election day and in the days leading up to it, along with the FBI. And we were very concerned. Fortunately, 33 states in some 36 cities and counties came to us before the election to seek our cybersecurity assistance. And we identified a number of vulnerabilities in election infrastructure which were addressed. But that process needs to continue. I'm concerned that we are almost as vulnerable perhaps now as we were six, nine months ago.

JOHN DICKERSON: When you see these attacks on the national security advisor, H.R. McMaster, the flood of Twitter traffic. Suddenly all these stories are bouncing around. Do you look at that and say, "That looks like what we saw before the election"?

JEH JOHNSON: I'm certainly suspicious of a concerted effort directed at this one individual. You know, I tell audiences, and I told Congress in June, the cyber threat is going to get worse before it gets better in this country. Bad cyber actors are becoming more aggressive, more ingenious, and more tenacious. And that's why we need a national campaign from the president, from the next secretary of Homeland Security to really address this problem. Nothing would surprise me at this point in terms of their capabilities.

JOHN DICKERSON: You said elections are still vulnerable. Why is it- We had hanging chads and a long history of election issues. Why is it so hard to fix the election system?

JEH JOHNSON: Well, part of it, frankly, in my judgement, is our politics. When I engaged state election officials last summer about helping them with their cybersecurity, we got a lot of pushback from local officials who said, "This is our-this is our domain, this is our responsibility, we don't want a federal takeover." And so I had to repeatedly say to them, "This is not a federal takeover, we're here to provide assistance if you ask." And I'm glad that a lot of them did, but there is that dynamic that makes it particularly challenging.

JOHN DICKERSON: Final question -- when you were at the Department of Defense, you were the top lawyer there. You dealt with leaks a lot --

JOHN DICKERSON: -- at the Department of Defense. Give me your assessment of what Attorney General Sessions has said about going after leaks. Is he drawing the line in the right place? And what does he need to balance?

JEH JOHNSON: The leaks right now are really bad. I've never seen it this bad. There should be a concerted effort to identify and go after leakers. The one note of caution I'd give the attorney general is what I tell younger lawyers: bad facts make bad law. So before you decide to take on journalists, reporters, and perhaps subpoena their sources, be aware that the courts are going to get involved, and that has the potential for making bad law in this area.

JOHN DICKERSON: All right, Secretary Johnson, thanks so much.

JEH JOHNSON: Thank you very much.