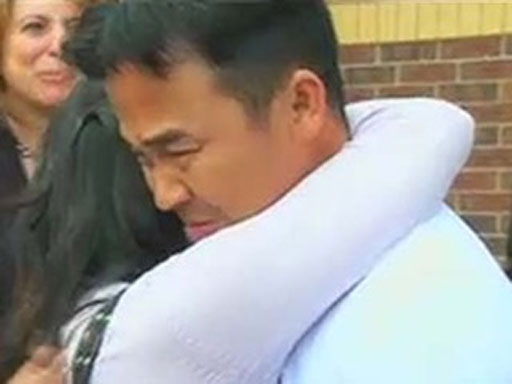 ST. PAUL, Minn. (CBS/WCCO/AP) Koua Fong Lee, the Minnesota man convicted in a 2006 Toyota crash that left three dead is now a free man. Shortly after a judge ordered a new trial for Lee - citing new evidence and a shoddy defense - Ramsay County prosecutor Susan Gaertner said she will not seek another trial.

Gaertner said Thursday that she thinks "it is time to bring this very tragic situation to a close," according to CBS affiliate WCCO. She spoke shortly after Judge Joanne Smith - the same judge who had sentenced Lee to 8 years in prison - ordered the new trial for Lee, 32, of St. Paul, Minn.

Gaertner said, according to WCCO, that Lee will not face further prosecution in connection with the events of June 10, 2006. She also said she understands why the judge ruled in favor of a new trial, though Gaertner stands by her office's opposition to it.

She finished by saying, "I wish Mr. Lee and his family the very best."

"It's not a dream. It's true," Lee said, as his wife, Panghoua Moua, buried her head in his shoulder. "When we are asleep in the cell, sometimes I dream and I wake up in the little room, still in the little room. But now my dream come true."

Lee, who immigrated to the U.S. from a Thai refugee camp in 2004, was driving a Toyota Camry when it plowed at high speed into the back of an Oldsmobile as Lee exited a St. Paul freeway ramp in 2006. He insisted during his trial that he did everything he could to stop the car but couldn't.

After being released, Lee said he wants to get to know his children. He has four children, ranging from 8 to just 2 years old. He said he wants them to know what the word "daddy" means.

Earlier Thursday, the Ramsey County Attorney's Office offered a deal to Lee, which gave him the chance to be released immediately if he withdrew his petition for a new trial.

Though the deal would've allowed Lee the chance to walk away from his eight-year prison sentence on criminal vehicular homicide and other charges, Lee rejected it because the conviction would've still stood. He would have remained a convicted felon and would have also had restrictions on his ability to drive.

Prosecutor Mark Lystig said Lee was driving too fast and was unfamiliar with the car when the crash occurred.

Lee was driving a 1996 Camry at the time of the crash. His car wasn't part of the recall.

Lee's attorneys had argued that evidence backed up Lee's account he was trying to brake. Prosecutors had opposed a new trial, saying there was no compelling new evidence.

Judge Smith said if that testimony from the other Toyota drivers had been introduced then, it would "more likely than not, or probably, or even almost certainly" have resulted in a different verdict for Lee.

Javis Trice Adams, 33, and his 10-year-old son, Javis Adams Jr., died in the 2006 accident. Adams' 6-year-old niece, Devyn Bolton, was paralyzed from the neck down and died shortly after Lee was convicted. Two others were badly hurt.

Bridgette Trice, Devyn Bolton's mother, welcomed Thursday's ruling. The victims' families had supported Lee's effort for a new trial, but Trice was crying outside the courthouse as she spoke to reporters.

"I'm happy for him but I'm still sad for us, cause he's going back to his but ours are never coming back to us," Trice said.

Lee said he wanted the victims' families to know he didn't intend to cause the accident. "I want them to know that I will pray for them and I also want to ask them to forgive me and to believe me," he said.

MORE ON CRIMESIDER
February 25, 2010 - Ripples of the Toyota Recall: Is an Innocent Man in Prison?