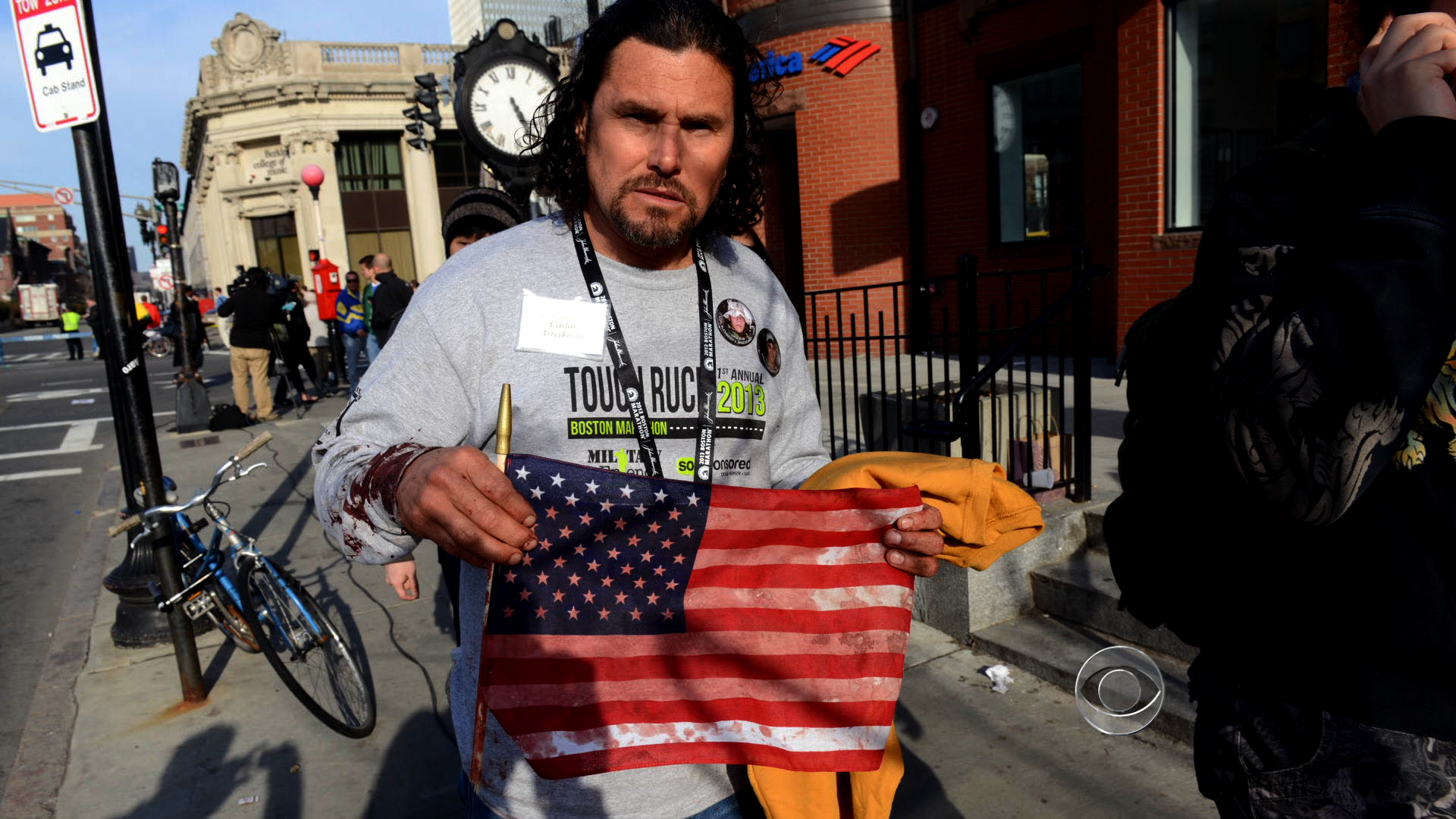 Not 24 hours after twin bombs exploded at the Boston Marathon, killing three and injuring over 100 more, talking heads on the left and the right commenced a round of political chicken about what may or may not have caused or prevented a terrorist act federal officials thus far know little to nothing about.

In a press conference Tuesday, President Obama said the bombings are being classified as an "act of terror," but that federal investigators haven't yet determined whether an organization or a "malevolent individual" carried them out. As details unfolded Tuesday about the explosive devices used in the attack, Boston's chief FBI agent made a public appeal for any tips that would help identify suspects; meantime, theories about whether the perpetrators were home-grown or foreign terrorists swirled rampantly.

The murkiness around the source of the bombings, though, didn't stop Rep. Steve King, R-Iowa, from spring-boarding off groundless speculation that it was the work of a foreign national. One Saudi national enrolled at a Boston-area university on a student visa was injured in the explosions, and was initially questioned by law enforcement. Investigators say the man, in his 20s, is currently being treated at a Boston hospital and is not being termed a person of interest.

Referencing rumors that the student is a yet-unnamed suspect, King cautioned lawmakers to tread lightly on immigration reform proposals offered by a Senate group Tuesday that would give temporary legal status to 11 million undocumented immigrants: "Some of the speculation that has come out is that yes, it was a foreign national and, speculating here, that it was potentially a person on a student visa," King said. "If that's the case, then we need to take a look at the big picture."

King in the past hasn't been coy about tendering his opinion that border security should trump any push for a pathway to citizenship, but his argument resurfaced fully charged as officials grew more comfortable terming the bombings a "terrorist" attack.

His isn't the only one: In a swing through cable news shows Tuesday, former Rep. Barney Frank, D-Mass., used the attack as a prop of sorts to resurrect Washington's fight over the sequester - the blind, across-the-board cuts that sunk into the federal budget March 1. While praising rapid movement Monday by first responders, Frank insinuated that without the additional revenue Democrats have fought to generate by raising taxes, the city of Boston may be forced to cut other services to fund the recovery process.

"I hope that we will then be able to find some revenue, I hope, from the federal government, so that Boston doesn't have to pay for this absolutely necessary expenditure, by cutting back on other important services down the line," Frank said on MSNBC. Pressed about whether he felt he was "capitalizing" on the bombings, he continued, "I'm making an argument about reality.

"...We are spending a great deal of public money here; I'm glad that we are," Frank said. "And yes, I do want maybe for this to have some people be less enthusiastic of reducing the ability to respond to a crisis like this."

Frank reiterated his remarks on CNN, but he had plenty of other allies to bolster his point. Rep. Xavier Becerra, D-Calif., chairman of the House Democratic Caucus, commented Tuesday that because of sequestration, "we have to send [Boston] less money to help your first responders," according to Politico; House Minority Whip Steny Hoyer, D-Md., during a press conference added the bombings are "clearly another place where it demonstrates why having the ability to address security concerns is important."

Asked Tuesday whether the bombings present an example of why Congress should work toward replacing the sequester, Hoyer said: "I think there are multiple reasons for ensuring that we invest in our security - both domestic and international security. That we invest in the education of our children. That we invest in growing jobs in America. And don't pursue an irrational, across-the-board policy of cutting the highest priorities and the lowest priorities essentially the same percentage.

"...I doubt that [sequestration's] having any impact presently, and the reason for that - this is a priority item, and I'm sure they're shifting what resources are necessary," he continued. "Even if they're shorter resources than they otherwise would've had, I'm sure they're putting all the resources necessary on this effort, certainly at the federal level; I think the president's made that pretty clear."

Though Mr. Obama on Monday stated that "on days like this, there are no Republicans or Democrats," only "Americans united," the tragedy has inspired not only a soapbox in Washington, but also a shield, which some conservatives have preemptively thrown up under their own assumptions they would receive undue flak in the bombings' wake.

On Monday, Rep. Steve Stockman, R-Texas, took to Twitter to demand an apology from CNN anchor Wolf Blitzer, for questioning whether the attack had anything to do with the fact that it happened on Patriots' Day - observed annually on the third Monday of April to commemorate the anniversary of the Battles of Lexington and Concord in the Revolutionary War. Stockman was among a host of conservatives accusing Blitzer of linking the bombings to the tea party, whose members oft term themselves "patriots."

Right-wing shock jock Rush Limbaugh joined early criticism of the explosions' news coverage: "There was a race in the media to make sure that nobody jumped to the gun and racially profiled... Nobody thinks this has anything to do with al Qaeda, nothing to do with Saudi Arabia, nothing to do with Muslims," Limbaugh said Tuesday on his radio program. "While at the same time speculating that this has to be some right-wing group.

"...If you are a Muslim, and it turns out that a Muslim did bomb the Boston Marathon, how do you feel?" Limbaugh continued. "I dare say that if you are a Muslim, you can be pretty certain...that everybody in the media will circle the wagons, and say, 'This is not because of Islam.'" But should the attack be traced back to a conservative, he added, "everybody in the media will unite to denounce your whole group."