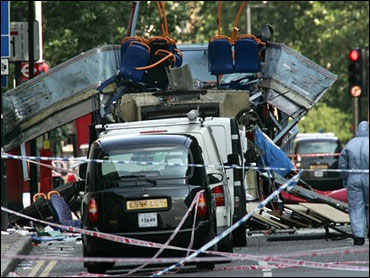 London commuters reluctantly descended into the Underground Friday morning, but buses and subways carried fewer riders than normal the day after

Police raised the death toll to more than 50 and said each of the bombs contained less than 10 pounds of explosives.

At least 700 people were wounded, with 100 still in the hospital, including 22 in serious or critical condition with burns, amputations and fractures.

Sir Ian Blair, commissioner of the Metropolitan Police, said work continued to establish the precise number of dead from the explosions on three subway trains and a double-decker bus.

Blair said there was no evidence that the attacks had been carried out by suicide bombers.

"We have absolutely nothing to suggest this was a suicide bombing attack although nothing at this stage to rule that out," he told a news conference.

Assistant Police Commissioner Andy Hayman said that officials still hadn't gotten near the subway cars of the Russell Square station, fearing that the tunnel is unsafe. Twenty-one dead were confirmed in that blast.

He said officials believe the bombs were placed on the floors of the three subway cars that were hit. He said the initial investigation suggests that each bomb had less than 10 pounds of explosives.

He appealed for patience as the investigation proceeds. "Our people are working under the most extreme circumstances."

CBS News Correspondent Jim Stewart(video)
reports British investigators are poring over surveillance camera tape looking for clues, if not the outright faces of the terrorists who pulled off Thursday's attack. There are tens of thousands of surveillance cameras on London streets – 6,000 in the London subways alone.

Stewart says investigators now suspect all the bombers used what they called the "step-on, step-off" delivery system of dropping off a bag and quickly leaving.

Based on evidence recovered from the rubble, investigators believe some of the bombs were on timers, a U.S. law enforcement official said. The official would not further describe the evidence.

Investigators doubt that cell phones — used in the Madrid train attacks a year ago — were used to detonate the bombs in the Underground because the phones often don't work in the system's tunnels, the official said. The official spoke on condition of anonymity because the investigation is ongoing.

Thursday's blasts went off within 18 minutes at three subway stations, starting at 8:51 a.m. An explosion ripped the roof off a double-decker bus less than an hour later, attacks that came as world leaders were opening the G-8 summit in Scotland.
Prime Minister Tony Blair (video)
, who just the day before had been basking in glory of Britain's successful Olympics bid, condemned the attacks and blamed Islamic extremists. Foreign Minister Jack Straw said the attacks bore the hallmark of Osama bin Laden's al Qaeda terrorist network.

A group calling itself the "Secret Group of al Qaeda's Jihad in Europe" has claimed it was behind the attacks, but that claim has not been verified. In a posting on a Web site, the group said the bombings are punishment for Britain's involvement in the war in Iraq and invasion of Afghanistan.

It threatened to attack Italy and Denmark for their support of the U.S.-led coalitions in both countries, too.

A senior U.S. counterterrorism official said the posting is considered to be a "potentially very credible" claim, in part because it appeared soon after the attacks.