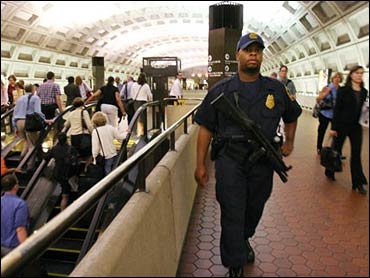 U.S. counterterror officials Thursday raised the terror threat level to Orange for rail and subways following the attacks in London. Cities around the country already displayed a heightened state of alert.

Airports and air travel were not included in the alert.

The terror alert had not been raised in the United States since last August, when the Homeland Security Department increased it to orange — or high — for financial institutions in Washington, New York and Newark, N.J., in the run up to the November elections.

"We are not suggesting that people avoid public transportation systems," Chertoff added, only that riders keep an eye out for problems.

"I actually think we have a very safe system, but the fact remains we've had an incident in London," he said. "We feel, at least in the short term, we should raise the level here because, obviously, we're concerned about the possibility of a copycat attack."

In a brief speech,

Mr. Bush warned Americans
to be "extra vigilant" as they head to work after the deadly explosions in London.

Terrorism analyst Neil Livingstone tells CBS radio affiliate WTOP in Washington that "it's not a question of if, but when" the U.S. will be attacked again by al Qaeda.

"This is a war that's going to have peaks and valleys," Livingstone said. "Since 9/11, nothing has happened. A lot of Americans think that Osama bin Laden's on the run, therefore we have nothing more to fear."

At the Pentagon, police officers said they had been placed on a heightened alert shortly after the London attacks.

The State Department told all U.S. embassies to review their security arrangements. Secretary of State Condoleezza Rice telephoned British Foreign Secretary Jack Straw offering any assistance his government might require, said a State Department official, who spoke on condition of anonymity because the official was not authorized to be identified.

The U.S. Embassy in London is secure, but the consular section, which deals with visas and other routine business, is closed, the official said.

Security around the massive home of the Defense Department, hit in the Sept. 11 attacks, was more visible than normal Thursday, with police officers in squad cars, on bicycles and on foot deployed in greater numbers than usual on the perimeter roadways and the Metro station.

Most local governments were doing just that soon after the London attacks.

At the Farragut West station, the one closest to the White House, CBS News Correspondent Peter Maer saw transit police using announcements and flashing signs to remind passengers to watch for anything suspicious.

They did: There was a report of suspicious package at the Rockville, Md., stop Thursday morning. It turned out to be a bag of trash.

About 1.2 million people a day ride Washington's buses and trains.

"Just show a little bit more alertness, look around, if there are any unattended bags or packages or backpacks, let the authorities know," he told WCBS-AM.

In Los Angeles, a police official said police had activated a special command center and officials were meeting to decide whether to upgrade security levels around the city.

A spokeswoman for the Chicago Transit Authority said transit officials were working with Chicago Police on additional security measures. CTA spokeswoman Kimberly Myles said announcements were being made to riders to be aware of their surroundings and to alert transit workers about suspicious packages.

In Massachusetts, Gov. Mitt Romney raised the security level on Boston's transit system as a precaution.

"I've directed that we assume Code Orange status with regard to our subway system, and that means bringing out additional resources, scrambling additional personnel to be able to monitor those who come out of the subway system, and to assure that we're moving as quickly as we can to protect the public," Romney told CBS radio station WBZ.

"Amtrak has increased its security threat level," spokesman Clifford Black told WTOP. "We're putting more resources into our security efforts ... We'll continue at this heightened security level until we have a better understanding of the events in London."

Ridership on the regional rail system in the Philadelphia area was normal during the morning rush hour.

"The public transportation systems were designed by their very nature to be as open and accessible to the public as possible, which obviously makes them vulnerable to terrorist attacks," SEPTA spokesman Richard Maloney said. "The greatest weapon in the terrorist arsenal is fear and panic."

Pennsylvania Gov. Ed Rendell said the state is ready to provide its large transit systems in Philadelphia and Pittsburgh with security help from the state police, if requested.

The U.S. Treasury Department was monitoring global markets following the attacks in London. In a written statement, Treasury Secretary John Snow said, "I will stay in touch with world financial leaders."