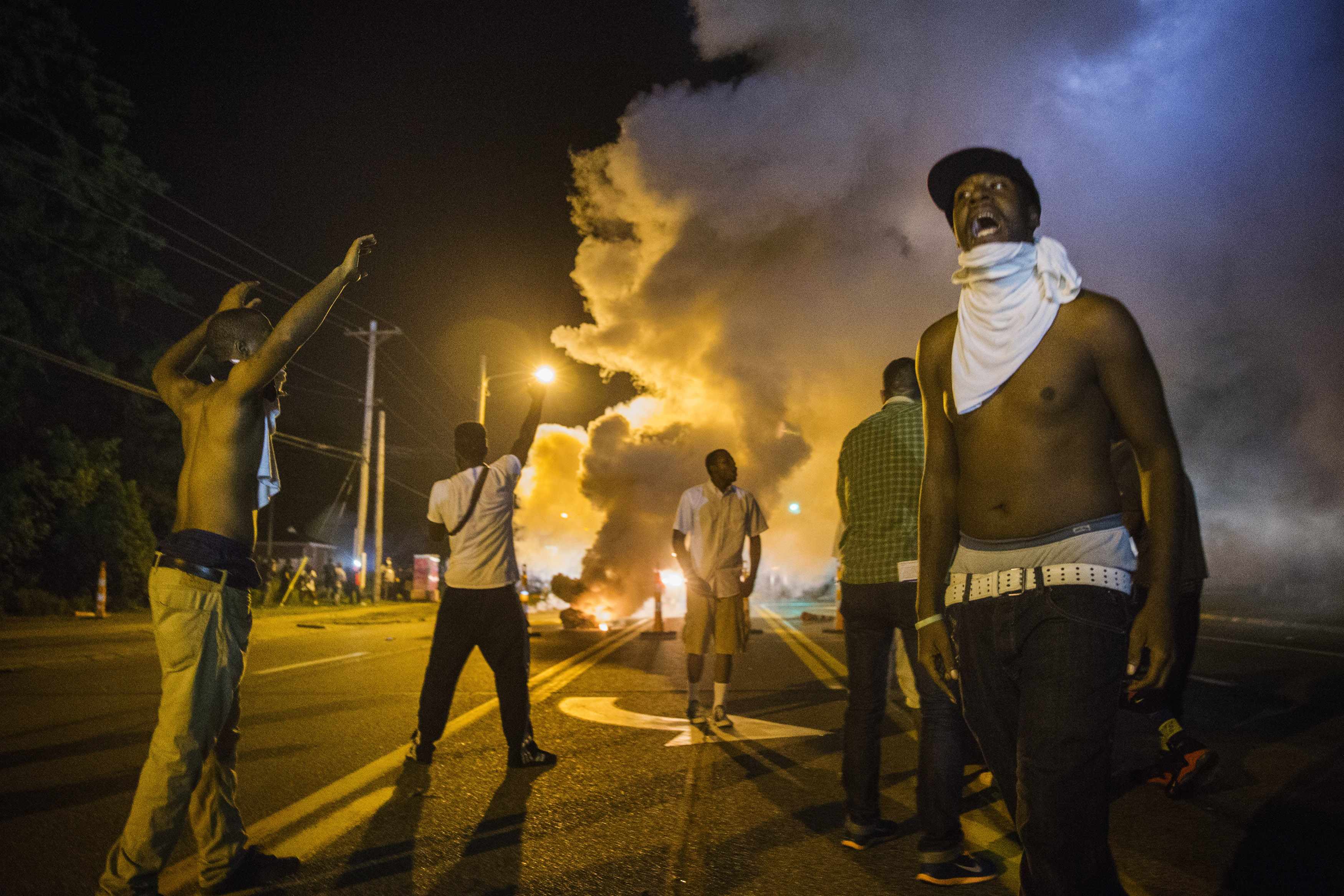 FERGUSON, Missouri -- More clashes erupted between police and protesters in Ferguson, Missouri, where racial tensions have boiled over since a police officer killed an unarmed 18-year-old black man. Dozens of people were arrested and the unrest forced schools to close for the rest of the week.

Protesters filled the streets of Ferguson after nightfall Monday, and officers trying to enforce tighter restrictions at times used bullhorns to order them to disperse. Police fired tear gas and flash grenades, and deployed noisemakers and armored vehicles to push demonstrators back.

Molotov cocktails and bottles were thrown from the crowd and some officers came under heavy gunfire, said Capt. Ron Johnson of the Missouri Highway Patrol, who is in charge of security in Ferguson. The National Guard arrived again the St. Louis suburb but kept its distance.

At least two people were shot and 31 were arrested, he said. Four officers were injured by rocks or bottles. A photographer and two German reporters were arrested and later released.

One peaceful demonstrator, Charles Bourrage, told CBS News correspondent Vladimir Duthiers that a small group of violent protesters were working against the message of the larger crowd.

"We grabbed those that were trying to move the violence forward and moved them back. We grabbed them literally," Bourrage said.

CBS affiliate KMOV reports that a "Code 2000" was issued around 11:30 Monday night, meaning 50 additional officers were requested to come to the scene.

The violence in Ferguson has forced three school districts to cancel classes. It has also forced the Ferguson-Florissant district to move the first day of school to Monday, August 25, more than a week after school was originally scheduled to begin.

The latest clashes came after a day in which a pathologist hired by the family of Michael Brown's family said the 18-year-old suffered a bullet wound to his right arm that may indicate his hands were up or his back was turned. But the pathologist said the team that examined Brown cannot be sure yet exactly how the wounds were inflicted until they have more information.

Brown's Aug. 9 slaying by a white officer angered many in Ferguson, a predominantly black community where the police force is mostly white.

Addressing the crisis Monday, President Barack Obama said the mistrust between police and local residents was endemic in many of America's communities and overcoming it would require Americans to "listen and not just shout."

He tried to strike a balanced tone, calling for respect for police but also understanding of the plight of young black men who feel unjustly targeted by law enforcement.

"In too many communities, too many young men of color are left behind and seen only as objects of fear," Obama said at the White House, while adding that crimes must be prosecuted and police honored for doing their jobs.

Obama said the vast majority of protesters in Ferguson were peaceful but a small minority was undermining justice. He said he spoke to Missouri Gov. Jay Nixon about his deployment of the National Guard in Ferguson and urged the governor to ensure the military reserve force was used in a limited way.

The president said Attorney General Eric Holder would arrive Wednesday in Ferguson to meet with FBI and other officials carrying out an independent federal investigation into Brown's death.

The Justice Department has mounted an unusually swift and aggressive response to Brown's death, from the independent autopsy to dozens of FBI agents combing Ferguson for witnesses to the shooting.

Demonstrators no longer faced a midnight-to-5 a.m. curfew that the governor had imposed but police told protesters that they could not assemble in a single spot and had to keep moving. After the streets had been mostly cleared, authorities ordered reporters to leave as well, citing the risk from gunfire that had been reported.

A photographer for Getty Images was arrested while covering the demonstrations and later released. Two German reporters were arrested and detained for three hours. Conservative German daily Die Welt said correspondent Ansgar Graw and reporter Frank Herrmann, who writes for German regional papers, were arrested after allegedly failing to follow police instructions to vacate an empty street. They said they followed police orders.

Johnson said members of the media had to be asked repeatedly to return to the sidewalks and that it was a matter of safety. He said in some cases it was not immediately clear who was a reporter but that once it was established, police acted properly.

Witnesses have said Brown's hands were above his head when he was repeatedly shot by the officer.

The independent autopsy determined that Brown was shot at least six times, including twice in the head, the family's lawyers and hired pathologists said.

The St. Louis County medical examiner's autopsy found that Brown was shot six to eight times in the head and chest, office administrator Suzanne McCune said Monday. But she declined to comment further, saying the full findings were not expected for about two weeks.

Holder, the attorney general, said a third and final autopsy was performed Monday for the Justice Department by one of the military's most experienced medical examiners.

The "Hands up, don't shoot" protest even made its way to the NFL. The Washington Redskins secondary emerged from the stadium tunnel during pregame introductions Monday night with hands raised and palms forward to show solidarity with the people of Ferguson. Eleven players took part as the team was preparing to face the Cleveland Browns.