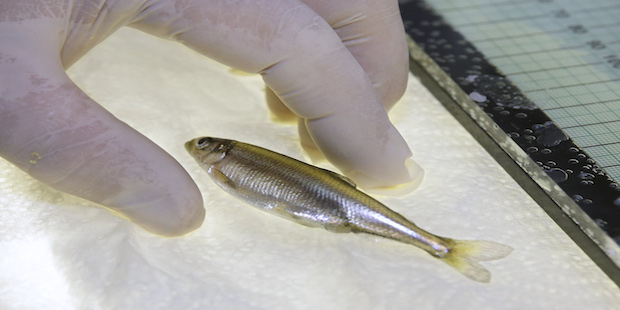 The silvery, finger-sized fish has been in trouble for years, but the four-year drought is helping to push the smelt to the brink of extinction. And it threatens several other native fish species, including the longfin smelt, green sturgeon and winter-run Chinook salmon.

In July, a key index of delta smelt abundance hit zero for the first time since the survey began in 1959. Researchers found a handful of smelt, but the number was too small to register on the population gauge.

"The delta smelt is basically on its last legs right now. We'll be lucky if it survives the coming year," said Peter Moyle, a fish biologist at the University of California, Davis who has been studying the fish for four decades.

On a recent fish survey, Moyle and three other researchers trawled the turbid waters of the sprawling estuary that once teemed with the delta smelt.

They pulled a net out of the water and emptied dozens of fish into a plastic bin on their research boat. They logged and tossed back 13 species, including carp, crappie, catfish and striped bass - but no delta smelt.

Delta smelt populations have been declining for decades due to invasive predators, pollution, habitat loss and increased water exports to farms and cities. The drought has worsened conditions by reducing freshwater flows and raising water temperatures.

"The drought has basically made all the things that were bad for smelt worse," Moyle said.

The delta smelt has been at the center of vicious water fights between farmers, fishermen, cities and environmentalists ever since it was listed as a threatened species under the U.S. Endangered Species Act in 1993. It was listed as an endangered under state law in 2010.

The government regularly cuts water exports from the delta to protect the smelt and other threatened fish from being sucked into the giant pumps that send water south.

Scientists and environmentalists say the sensitive fish needs protection because it's a key indicator of the delta's health, but farmers say too much precious water has been wasted on the fish - water that could be used to grow crops and fill reservoirs.

Stanislaus County almond grower Jim Jasper, who relies on delta water to irrigate his orchards, was a part of a lawsuit that challenged the U.S. Fish and Wildlife Service over delta smelt protections. The U.S. Supreme Court rejected their appeal earlier this year, leaving the water restrictions in place.

Last year, Jasper pulled out 400 acres of almond trees - about one-fifth of his orchards - because he couldn't get enough water to irrigate them, reducing his almond production and forcing him to cut employee work hours.

Standing next to the irrigation canal that delivers water from the delta, Jasper said endangered species protections have worsened the agricultural impacts of the drought.

"The delta smelt continues to wrack a lot of havoc on today's farming community," said Jasper, who runs Steward & Jasper Orchards, the Newman, California-based almond company his father co-founded in 1948. "If it became extinct would anybody's lives change? I really don't think so."

The UC Davis Fish Conservation and Culture Laboratory in Byron may be the last place where you can still find large numbers of delta smelt.

The hatchery was recently awarded a $10 million federal grant to continue its work breeding the smelt in captivity for scientific research and to ensure its survival if the species vanishes from the wild.

"One of our most important projects is to maintain a refuge population of this species," said Tien-Chieh Hung, the lab's director. "We may be the place that holds the most delta smelt in the world."

While the lab could eventually release its carefully bred smelt into the delta, there's no guarantee they could survive in the wild and there would be no point if their native habitat can no longer support them.

That's why researchers say it's better to protect the smelt now before they disappear from the delta.