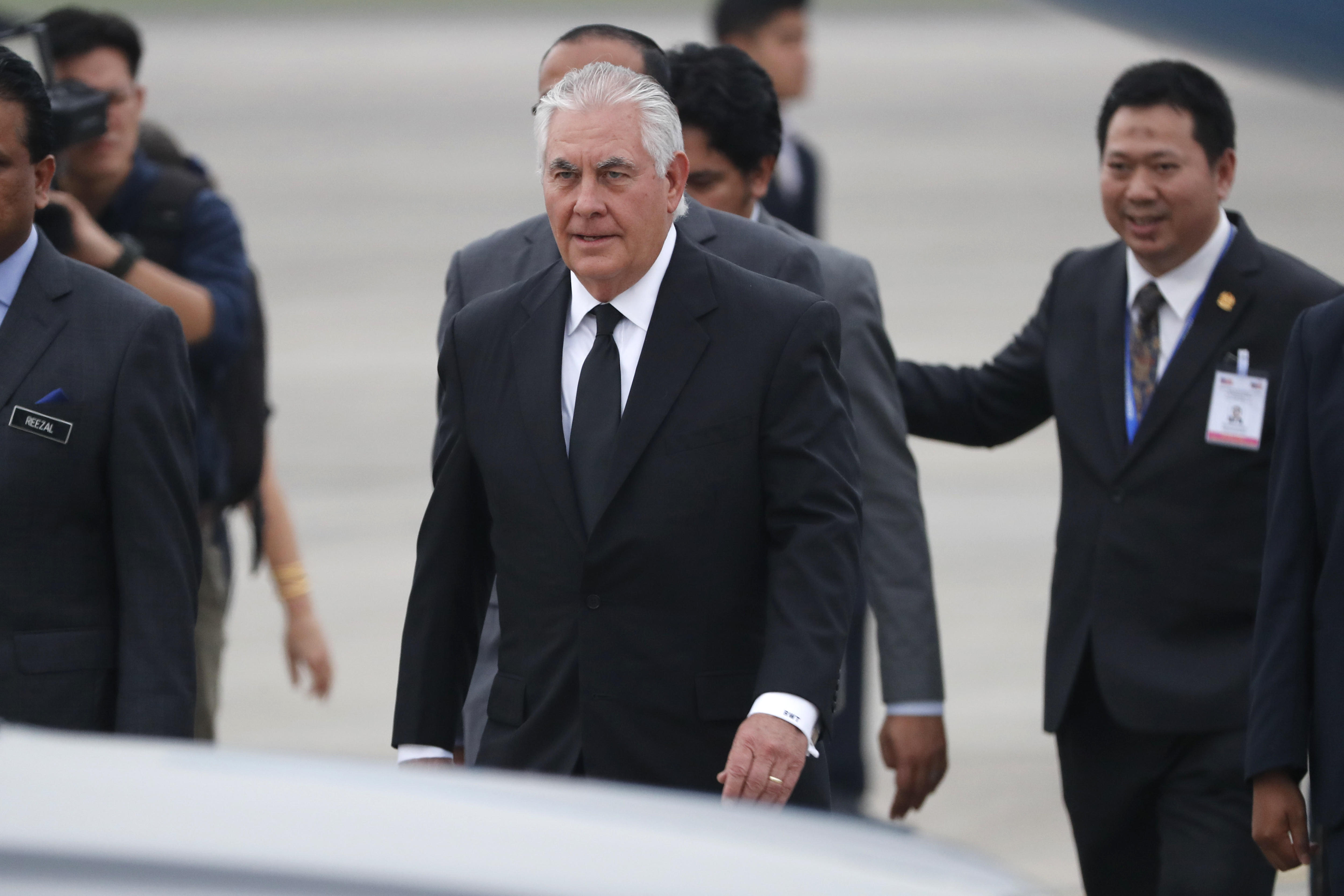 MANILA, PHILIPPINES -- Less than weeks before Secretary of State Rex Tillerson landed here in the Philippines, the U.S. delivered piloted aircraft and drone to the small Southeast Asian country.

The delivery was sent to bolster the nation's ability to combat the rise of ISIS-aligned terrorists that are besieging cities in the south. The shipment had been sped up, according to one U..S government official, because the threat was real and the U.S. saw an urgent need to support government forces.

In a hotel room in Manila, just hours before meeting with President Rodrigo Duterte at his palace, Tillerson told reporters that he sees "no conflict" in supporting the country's battle against ISIS -- even in the face of the government's heinous drug war.

Tillerson was the first member of Trump's cabinet to meet with Duterte, who launched his drug war just over a year ago. Trump has commended Duterte for the "unbelievable job" he has done fighting drugs. The operation has slaughtered over 7,000 drug users, according to Human Rights Watch.

Tillerson did not use the moment to take a stand for human rights.

As Duterte and Tillerson stood and shook hands in the presidential palace, each donning a wide grin, Tillerson ignored a CBS News reporter's questions about the agenda of the meeting. Another reporter blurted out a question about human rights – which was hard to hear above the loud, incessant camera clicks in the room -- but Tillerson didn't say anything.

"I am your humble friend in Southeast Asa," Duterte said to Tillerson with reporters in the room. It marked a change of tone for the president, who is known for anti-American rhetoric.

Amid reports of police backing vigilantes that carry out rampant masked murders of drug users, the poor areas in Manila are ravaged by violence. Poor Filipinos feel hopeless and voiceless. The government argues that decreased crime shows that its efforts are working.They also say homicide numbers are actually down, when compared to previous years.

The Philippine government says human rights groups are conflating regular homicides with drug war-related deaths. The Philippine National Police (PNP) statistics say that 14,160 Filipinos have been killed in homicides in the last year, according to their latest statistics from July. They say that 2,163 of those deaths are drug related and 2,855 are non-drug related. The PNP says the motive for the majority of the murders -- 9,142 – has yet to be determined.

Regardless of the data set one looks at, most accept the basic reality: the drug war has been bloody. The Philippine government shut down the operation earlier this year to recalibrate their efforts and make the conflict lees violent. The U.S. is reluctant to "micro-manage" how the country should handle the situation, according to an American government official. And while the U.S. would support a Filipino investigation into the rampant murders, it is not actively advocating for a UN investigation.

Over the last seven months, a U.S. government official has met with Duterte seven times. They describe him as "substantive, thoughtful and detailed." And Tillerson never publicly addressed the brutal anti-drug tactics while he was in the country.

When Tillerson met one on one with Duterte, two Filipino government officials say that Tillerson didn't mention the U.S. government's human rights concerns with regard to the anti-narcotics tactics. "I don't know why he didn't raise it. Maybe he thought it didn't need to be raised," one of them said. Tillerson's press aide, R.C. Hammond, says that that is incorrect and that the secretary did raise the "concerns of the American people" over the country's handling of drug cartels.

Tillerson also referenced efforts to combat drug cartels in the U.S. and offered assistance to help the country implement better tactics to solve the problem.

Tillerson has received criticism for sidelining human rights as a cornerstone of U.S. foreign policy, which he said had gotten "a little bit out of balance" in past years.

"Our values around freedom, human dignity, the way people are treated. Those are our values. Those are not our policies; they're values," Tillerson said in a speech to State Department employees in the spring. "If we condition too heavily that others must adopt this value that we've come to over a long history of our own, it really creates obstacles to our ability to advance our national security interests, our economic interests."

The State Department's human rights report does signal out Duterte for the killings in the country.

"The most significant human rights problems were killings allegedly undertaken by vigilantes, security forces, and insurgents; cases of apparent governmental disregard for human rights and due process; and a weak and overburdened criminal justice system notable for slow court procedures, weak prosecutions, and poor cooperation between police and investigators," it states.

As it helps bolster Philippine forces, the Trump administration has otherwise largely stayed away from harsh public condemnation of Duterte. U.S. assistance is support of the country's anti-ISIS war has been "small but effective," said a U.S. government official. The country is also looking at next steps and considering providing more help with infrastructure projects in an effort to ensure that peace takes root.

Meanwhile, the Philippine government is seeing how they can "reduce the dependency" on the U.S. by turning to Russia and China. Purchasing arms from China comes with no strings attached, and Beijing is wooing the strategically located island nation that was once home to a robust American military presence. Just last month, China donated more than 3,000 rifles and ammunition to the Philippines, and most of that is now in the hands of the PNP.

"The U.S. Congress attaches a lot of conditions, where as other countries don't attach the same conditions. If we really need it is it is probably best to get it from a country where it is more transactional," explained a Filipino government official.