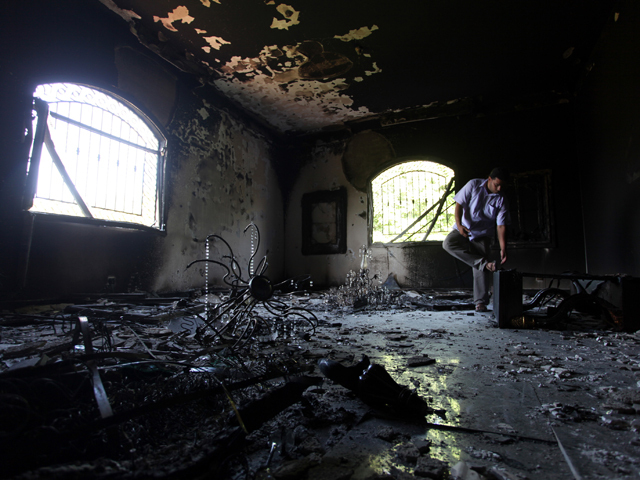 As the deputy chief of mission for the U.S. in Libya, Gregory Hicks was on the ground at the U.S. Embassy in Tripoli on September 11, 2012, when terrorists launched two attacks on American compounds in Benghazi.

Hicks and two other government officials have been named as witnesses for a Congressional hearing Wednesday before the House Oversight Committee. The others are: Eric Nordstrom, the former lead security official for the State Department in Libya, and Mark Thompson, the acting deputy assistant secretary for counterterrorism at the State Department. Other so-called "whistleblowers" from federal agencies, including the CIA, have provided information to Congressional investigators, but are said to be unwilling - so far - to speak publicly because they aren't authorized by their agencies to do so. Some claim fear of retaliation.

It's been a remarkably long period of silence from the dozens of American survivors and eyewitnesses who were in Libya the night of the attacks. It's not publicly known what testimony the witnesses will give at this week's hearing, but in a series of interviews and communications, CBS News has obtained information about some of areas of knowledge the witnesses can address.

Hicks was number two to Ambassador Christopher Stevens, who was killed in the attacks. With Stevens in Benghazi on September 11, Hicks was the top Foreign Service official at the U.S. Embassy in Tripoli. When the first U.S. compound in Benghazi fell under attack, Hicks reportedly took the frantic call.

"Greg, we are under attack," Ambassador Stevens told Hicks on the phone. Those were the last words he heard from Stevens.

Hicks was also on the receiving end of calls when Stevens went missing. Later, he was on the phone when an unidentified man called the U.S. Embassy using Stevens' own telephone to say the ambassador was at Benghazi hospital. Still later, Hicks said he was there when Stevens' body was turned over to U.S. personnel under circumstances that still remain mysterious.

Throughout the night, sources say Americans on the ground in Libya at times felt helpless and abandoned.

"We relied on Washington for dispassionate assessment," one eyewitness told CBS News. "Instead, they [Washington officials] were asking us what help we needed. We answered: 'Send reinforcements!' "

But they were told immediate help wasn't available.

Embassy personnel say they repeatedly asked the Defense Attache on site in Tripoli for military assistance.

"Isn't there anything available?" one Embassy official says he asked. "But the answer was 'no.'"

"What about Aviano?" the official pressed, referencing the NATO air base with US assets in northeastern Italy. "No," was the answer.

Two of the four Americans killed that night died hours after the first attack began.

Some have complained the Obama Administration has not explained why there were no military resources available to turbulent North Africa on the Sept. 11 attacks, even at the large Souda Bay U.S. Naval base less than an hour's flight from Libya. The State Department's independent Accountability Review Board said government officials did everything they could, considering the challenges. The Defense Department has since reported implementation of improvements to make military resources more readily available if needed.

Another witness for Wednesday's hearing, Mark Thompson, is a counterterrorism expert. He's likely to address another sore spot surrounding the night of the attacks: the fact that the Obama Administration did not convene its top interagency counterterrorism resource, the Counterterrorism Security Group (CSG). According to Rep. Issa, Thompson will testify that he was locked out of the process "even though he was the individual who was supposed to react to these kinds of things."

Counterterrorism sources and internal emails reviewed by CBS News express frustration that key responders were ready to deploy, but were not called upon to help in the attack. National Security Council Spokesman Tommy Vietor told CBS News the CSG was not needed.

"From the moment the president was briefed on the Benghazi attack, the response effort was handled by the most senior national security officials in governments. Members of the CSG were of course involved in these meetings and discussions to support their bosses," said Vietor.

"The CSG is the one group that's supposed to know what resources every agency has. They know of multiple options and have the ability to coordinate counterterrorism assets across all the agencies," a high-ranking government official told CBS News. "They were not allowed to do their job. They were not called upon."

Absent coordination from Counterterrorism Security Group, a senior U.S. counterterrorism official says the response to the crisis became more confused. "The response process was isolated at the most senior level," says an official referring to top officials in the executive branch. "My fellow counterterrorism professionals and I (were) not consulted."

Hicks and several others whose accounts are at odds with official government statements about Benghazi have reported feeling marginalized, intimidated and/or subjected to threats of retaliation.

The top Democrat on the House Intelligence Committee, Dutch Ruppersberger, told Bob Schieffer on Sunday's "Face the Nation:" "Let's get the facts. This should not be a partisan issue at all. This should be to get the facts, an open issue, and to hear from everybody. And when you hear allegations that people are told not to talk, I would hope those issues would come out and if that's the case we should be held accountable."