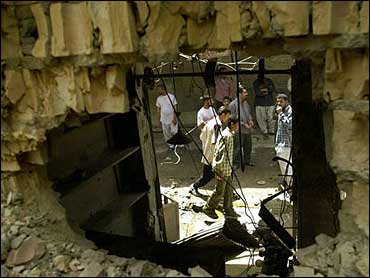 The Marines were assigned to the 1st Marine Expeditionary Force, which is responsible for security in a wide area from just west of Baghdad to the borders of Syria and Jordan. The statement gave no further details, citing security.

Earlier Saturday, Iraqi witnesses reported attacks on military convoys near two towns in Anbar province - Fallujah and Ramadi - and a large explosion in the area of Fallujah after sundown. However, it was not known whether the Marines died in any of those incidents.

Also Saturday, the U.S. military reported two other service member deaths - one soldier from the Stryker Brigade who died Friday from non-hostile causes in northern Iraq and the other soldier from the 81st Brigade Combat Team who was killed Tuesday in a mortar attack south of Baghdad.

In the south, the U.S.-appointed governor of Najaf accused radical cleric Muqtada al-Sadr on Saturday of failing to honor a deal to end the fighting in the holy city of Kufa. This, as U.S. soldiers clashed with Shiite gunmen in Kufa for the second straight day since the agreement was announced.
Al-Sadr's fighters said they killed one Iraqi policeman and captured another during an exchange of fire in Najaf's twin city Kufa.

Three Iraqis were injured in clashes Saturday in Kufa, hospital officials said. There were no reports of any U.S. casualties.