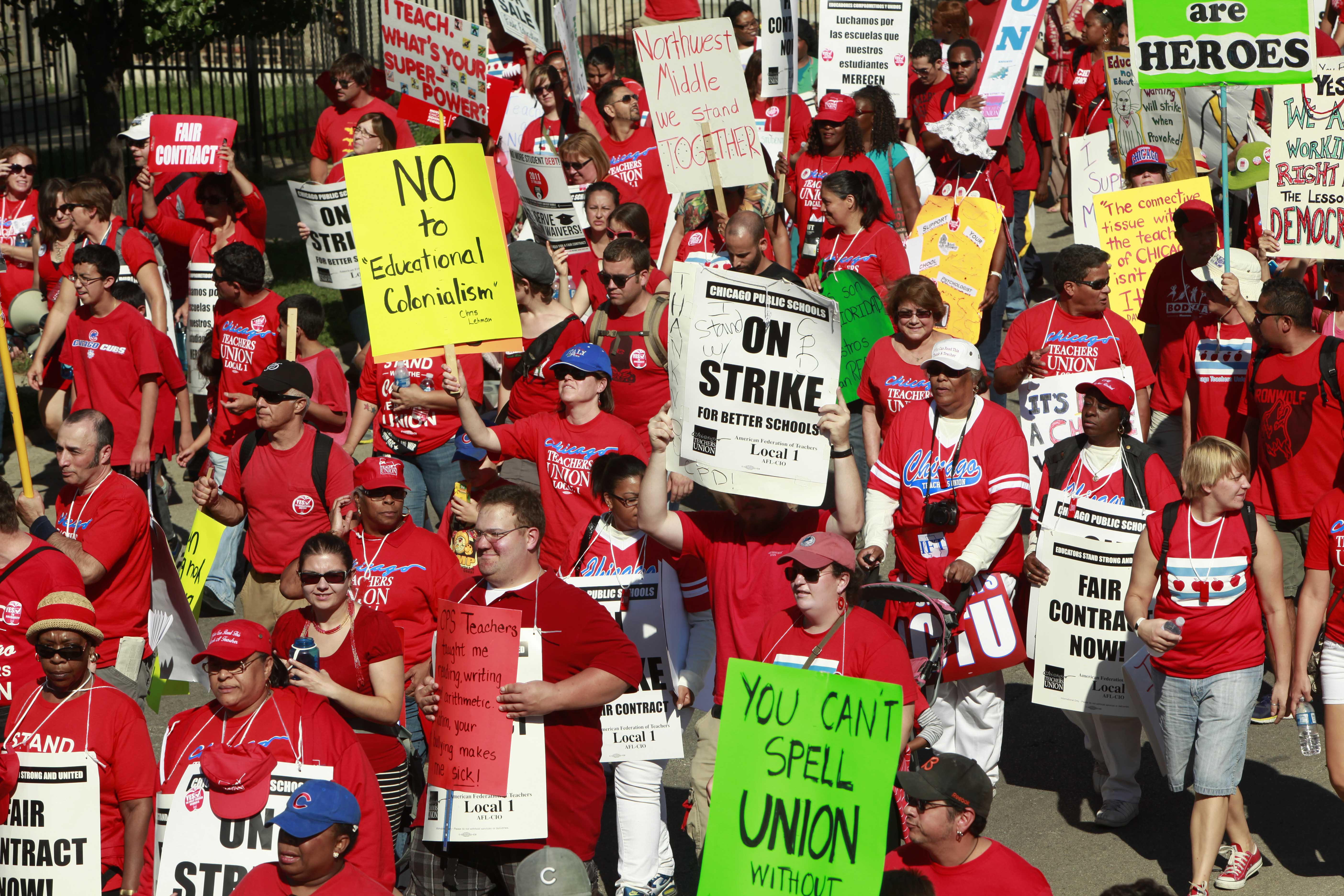 (AP) CHICAGO - Thousands of striking Chicago public school teachers and their allies packed a city park Saturday in a boisterous show of force as union leaders and the district tried to work out the details of an agreement that could end a week-long walkout.

Pushing strollers, toting signs and towing wagons of children, thousands of red-shirted teachers cheered and chanted as speaker after speaker urged them to stand firm until they have a deal in writing. They told the teachers that their strike was a symbol of hope for public teachers and other unions that have been losing ground around the nation.

"I'm pretty confident that something will come together that both sides will agree on," said Ramses James, a sixth-grade math teacher. "I believe this is a very strong turning point when you have so many people coming out to fight alongside (the teachers union). That means a lot."

Months of contract negotiations came down to two main issues: job security and union opposition to a new teacher evaluation process the union felt was too heavily weighted on student test scores.

Union leaders who announced a framework for a deal on Friday said they would not end the strike -- the first in Chicago in 25 years -- until they see a proposal in writing. Saturday's talks were aimed at settling on the exact language, and Chicago Teachers Union delegates said late Saturday that they will meet Sunday to review a proposed contract and vote on whether to suspend the strike.

Addressing demonstrators Saturday, Chicago Teachers Union President Karen Lewis cautioned that "we are on strike" and that classes won't resume until the delegates see an agreement they can support.

The Rev. Jesse Jackson also addressed the crowd, saying the strike was a "struggle for working people everywhere" and that there was still a long road to ensuring all residents of the city have equal access to quality schools, especially in neighborhoods beset by gang violence and poverty.

Saturday's talks took place at the offices of union attorney Robert Bloch. On his way into the talks, Chicago Teachers Union Vice President Jesse Sharkey was optimistic that timetable was still possible.

"We're hopeful that we can do it but frankly like I said, the devil is in the details of this contract and we want it in writing," he told reporters. "We're going to go in today and hammer (out) the details."

Union members from Wisconsin, Minnesota and elsewhere joined Saturday's rally in show of solidarity. For Wisconsin teachers, the rally also served as a moment to celebrate a judge's Friday ruling striking down nearly all of a contentious state law championed by Republican Gov. Scott Walker that had effectively ended collective bargaining rights for most public workers.

Walker's administration immediately vowed to appeal, while unions, which have vigorously fought the law, declared victory.

"People are energized by this," said Marty Horning a high school social studies teacher from Milwaukee who came to the rally with a busload of others. "I think that the line has to be drawn in terms of teacher bashing, union bashing and privatization of education. These forces and factors are not just in Chicago, not just in Wisconsin, but across the nation and (Chicago) happens to be the spear point."

Mayor Rahm Emanuel, who has blasted the union for engaging in a "strike of choice," sounded optimistic Friday, saying "the tentative framework is an honest and principled compromise that is about who we all work for: the students."

The walkout in the nation's third-largest school district canceled five days of class for more than 350,000 public school students who had just returned from summer vacation.

Until this week, Chicago teachers had not walked out since 1987, when they were on strike for 19 days.