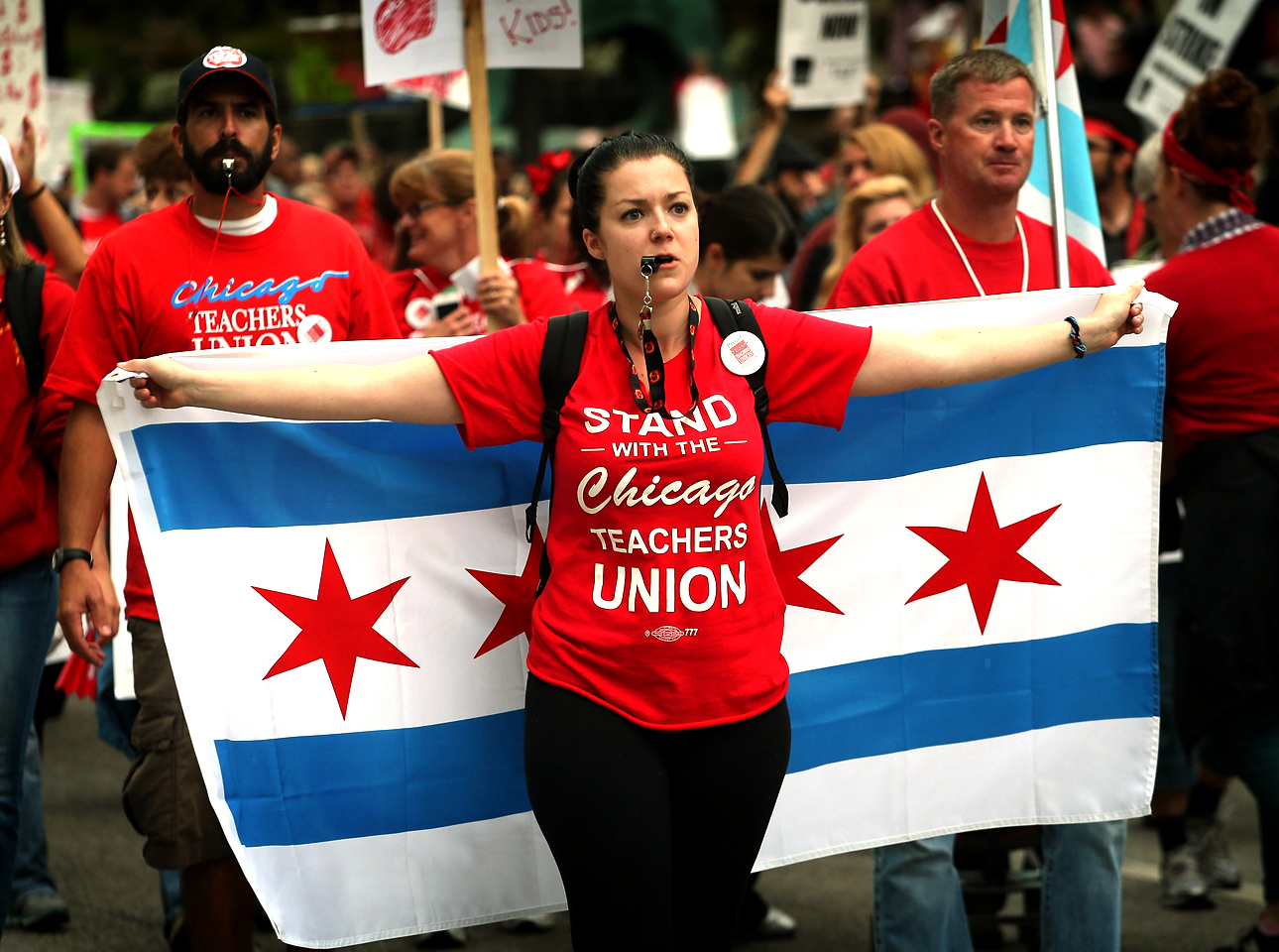 (AP) CHICAGO - The city's nearly weeklong teachers strike appeared headed toward a resolution Friday after negotiators emerged from marathon talks to say they had achieved a "framework" that could end the walkout in time for students to return to class Monday.

Both sides were careful not to describe the deal as a final agreement and declined to release the terms. They expected to spend the weekend working out details before union delegates are asked to vote Sunday on whether to call off the strike.

School Board President David Vitale said the "heavy lifting" was over after long hours of talks placed "frameworks around all the major issues."

Union President Karen Lewis agreed, saying there were no "main sticking points right now." But she reiterated that there is also no contract yet and the strike remains in full effect. Despite the apparent progress, she said, the union is still suspicious of the board after being burned in the past.

The walkout has been a potent display of union power at a time when organized labor has been losing ground around the nation. The negotiations have been closely followed by many other unions and school districts that face the same issues about the future of urban education, particularly teacher evaluations linked to student test scores and the threat of school closures.

In a statement, Mayor Rahm Emanuel said the framework "is an honest and principled compromise" that "preserves more time for learning in the classroom, provides more support teachers to excel at their craft and gives principals the latitude and responsibility to build an environment in which our children can succeed."

Robert Bloch, an attorney for the union, called it "one of the most difficult labor contracts negotiated in decades." He said many of the core issues had been worked out "but not all of them."

Shortly after negotiators reported the progress, Lewis entered a meeting of union delegates. The delegates could be seen through windows cheering and applauding, some of them on their feet and pumping their fists in the air.

Journalists were not allowed inside the meeting, but delegates said later that the cheering was not for a deal but because the negotiating team had promised there would be no agreement until everything was in writing.

Still, both sides sounded more optimistic than at any point since teachers hit the picket line Monday.

When the contract offer is complete, the union's bargaining committee expected to recommend the contract proposal to the membership, Bloch said.

"And if we have been listening to the membership well and have heard their concerns, then that agreement will be accepted by our membership overall," he said.

The walkout, the first by Chicago teachers in 25 years, canceled five days of school for more than 350,000 public school students who had just returned from summer vacation.

At one point, the district offered a 16 percent raise over four years — far beyond what most American employers have offered in the aftermath of the Great Recession. But teacher evaluations and job-security measures stirred the most intense debate.

The union sought a plan for laid-off instructors to get first dibs on job openings and for an evaluation system that does not rely heavily on student test scores.

The district offered compromises, including provisions that would have protected tenured teachers from dismissal in the first year of the evaluations and created an appeals process. Another proposal offered laid-off teachers the first right to jobs matching their qualifications at schools that absorb the children from their closed school.

It wasn't immediately clear if the union had accepted those provisions.

The strike by more than 25,000 teachers in the nation's third-largest school district idled many children and teenagers, leaving some unsupervised in gang-dominated neighborhoods.

Because many of the same issues confront other school districts beyond Chicago, teachers from Wisconsin, Minnesota and perhaps as far away as Boston were making plans to attend a rally Saturday in Chicago.

The strike "has magnified and elevated the public debate on school reform," said Terry Mazany, president and CEO of the Chicago Community Trust, which has focused on school improvement, and a former interim CEO at Chicago Public Schools. "It has become the focal point for the union movement and its future in this country."

On Friday, readers of the Chicago Sun-Times opened the paper to a full-page letter to Emanuel written by the Boston Teachers Union.

The union reminded readers that some of the things Chicago teachers are fighting have long been available to Boston teachers, including the right to let teachers with seniority move into jobs in other schools if their schools close down.

Perhaps more significantly, the union took Emanuel to task for the contentiousness of the negotiations, putting the blame on the mayor's shoulders.

"Perhaps you can learn from us — and begin to treat your own teaching force with the same respect," the union wrote.

Meanwhile, Chicago teachers said they were planning a "Wisconsin-style" rally for Saturday, regardless of progress on the contract. A couple of hundred Wisconsin teachers planned to come to Chicago to join the event.

"It's really sort of a spontaneous kind of organizing," said Bob Peterson, president of the Milwaukee Teachers' Education Association, which unsuccessfully sought the recall of Gov. Scott Walker.

Until this week, Chicago teachers had not walked out since 1987, when they were on strike for 19 days.