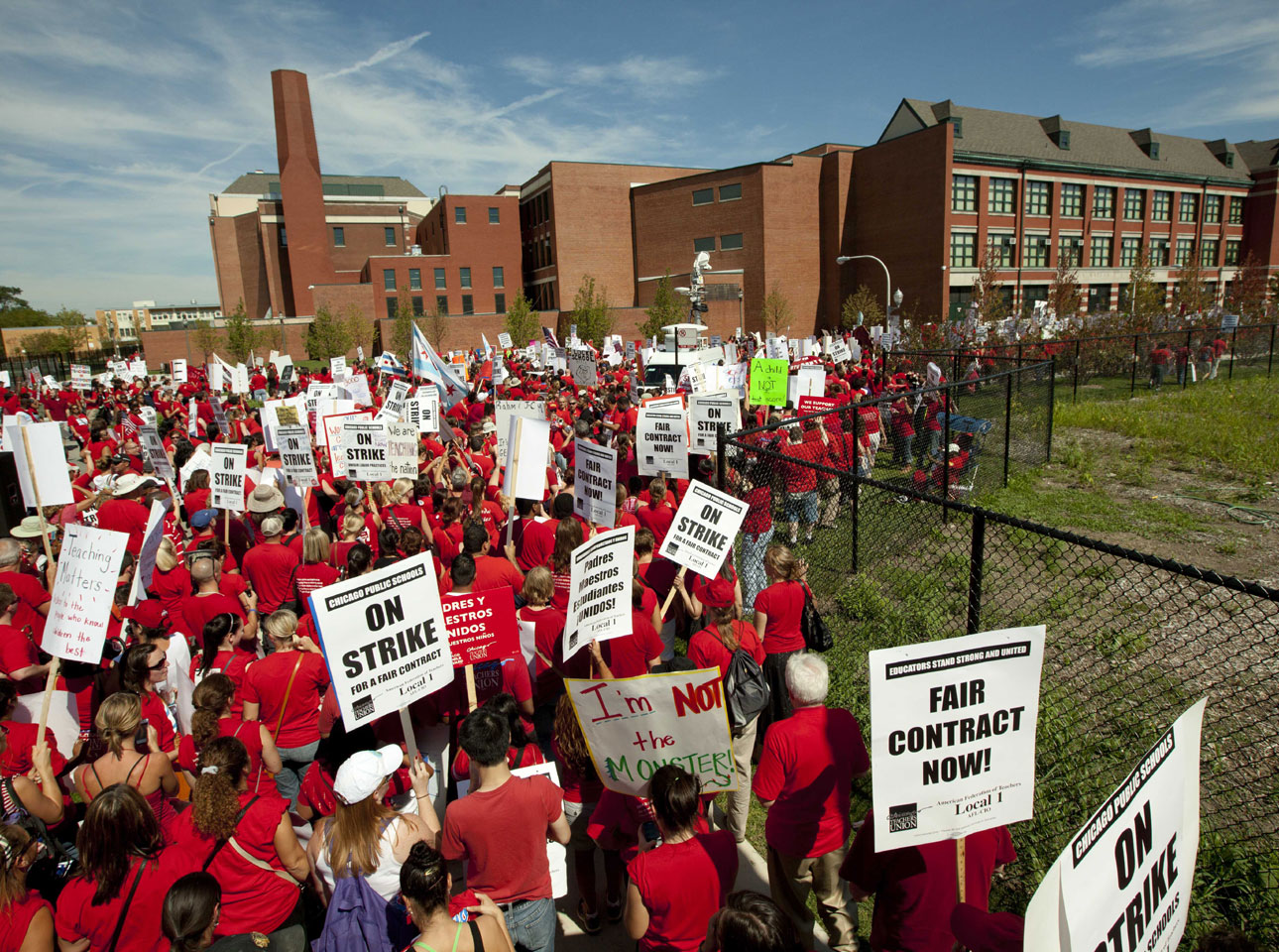 (AP) CHICAGO - The city's public schools will stay closed for at least one more day, but leaders of the Chicago Teachers Union and the school district kept talking Thursday, with both sides saying they were drawing closer to a deal to end the nearly weeklong strike.

"We are optimistic, but we are still hammering things out," said Karen Lewis, the union president.

Word of the progress in negotiations came less than a day after the school board offered to modify a system that would use student test scores to help evaluate teacher performance.

Under an old proposal, the union estimated that 6,000 teachers could lose their jobs within two years. An offer made late Wednesday included provisions that would have protected tenured teachers from dismissal in the first year of the evaluations. It also altered categories that teachers can be rated on and added an appeals process.

Classes were to be canceled Friday for a fifth day. And the union called a special delegates meeting for that afternoon, when the bargaining team is scheduled to give an update on contract talks.

Late Thursday, the school board said its latest proposal was in the hands of the union and that the union bargaining team was meeting separately to discuss it.

Board spokeswoman Becky Carroll expected a response later in the night.

"We are at the brink of getting all the key issues addressed so that we can move forward with getting a deal and getting our kids back to school," she said.

Carroll said the main sticking points are still the evaluation system and the union's demands that laid-off teachers get top consideration for rehiring. The district worries that could result in principals being forced to hire unsuited teachers.

"We've made many modifications over the last several days to our proposal," Carroll said. "We feel that we're there. And at this point, it's in the CTU's hands to bring it to a close."

Negotiations resumed Thursday with an air of optimism. Lewis said students could be back in class by Monday, a week after 25,000 teachers walked out.

"We've made progress in some areas but still we have a way to go," she added. "Teachers, paraprofessionals and clinicians remain hopeful but energized."

Following a late-night bargaining session Wednesday, school board President David Vitale was also more positive. But after a full day of bargaining, neither side had emerged to announce any breakthroughs.

Jackson Potter, staff coordinator for the union, said a host of issues were still on the table, ranging from the evaluations to air conditioning in schools.

"There's a sense of urgency today," said the Rev. Jesse Jackson, who stopped by the hotel where the negotiators were working Thursday and spoke to reporters. Earlier in the week, Jackson said the two sides were talking past each other.

The new optimism also was evident among teachers who marched Thursday along Michigan Avenue. They were joined by marching bands and protesters carrying balloons, pushing strollers and waving Chicago flags.

Among them was high school history teacher Anthony Smith, who wants the district to be fair and give all public schools the same resources so they can succeed. The negotiating points include a policy to hire back teachers who get laid off due to school closures.

"One school being closed down because they didn't give it proper resources and proper attention is unfair," said Smith, a 25-year classroom veteran.

Earlier, teachers picketed at their schools, as they've done every day this week.

"I know that we will have a good resolution to this, and I do believe it will be soon," said Michelle Gunderson, an elementary school teacher on the city's North Side. The negotiators "do not mean to have us be embroiled in this for longer than we have to."

School districts nationwide have grappled with issues surrounding teacher assessments. The Obama administration has given states incentives to use student performance as a component of evaluations, though the issue has been most contentious in Chicago.

Teachers say it's unfair to use test scores to evaluate them, citing the many factors beyond their control that affect student learning: poverty, hunger and the inability to speak fluent English, to name just a few.

Chicago's walkout canceled class for approximately 350,000 students and left parents scrambling to make other arrangements for young children. The district has kept some schools open on a limited basis, mostly to provide meals and supervision. More than 80 percent of Chicago public school students qualify for free or reduced-price lunches.

The walkout is the first Chicago teachers strike in 25 years. A 1987 walkout lasted 19 days.

Chicago Mayor Rahm Emanuel has called the strike unnecessary and repeatedly urged the union to continue negotiating with students in class.