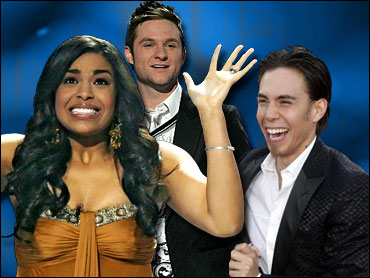 Ah, the sweet smell of success. Jordin Sparks and Apolo Anton Ohno got a whiff this week. And the agony of defeat? Several people were dealt that painful blow, too.

It came as no surprise that Sparks walked away with the "American Idol" crown on Wednesday. The last round of the competition had the 17-year-old singing the original song, "This is my Now," and she nailed it.

Blake Lewis? Not so much. It was hard to buy the 25-year-old beat boxer's version of the sappy ballad when he sang it on the penultimate episode of the series. In his own way, though, Lewis won big. At least, he can release a more sound-appropriate single.

Olympic Gold medalist Apolo Anton Ohno danced his way into America's hearts on the fourth season of "Dancing With The Stars" and now has a mirrored disco ball trophy to show for it. The athletes' energetic and passionate performances with partner Julianne Hough wowed the judges each week and kept America guessing.

Photos: "Dancing With The Stars" Finale

Sadly, it wasn't meant to be for finalists Joey Fatone and Laila Ali, but they didn't leave with nothing. The competition left them pounds lighter and in incredible shape.

Away from the dance floor, on another ABC reality show, a dashing navy doctor handed out the final rose on "The Bachelor" and proposed marriage. Twenty-six-year-old Tessa Horst, a social worker from San Francisco, whom he chose from 25 potential brides, said "yes."

At first hesitant about the idea of meeting a mate on the reality show, Horst ended up walking into sunset with Baldwin, leaving research coordinator Bevin Powers to cry alone in the limo.

Perhaps the most talked about face-off of the week took place on "The View." It was a war of the words between Rosie O'Donnell and Elisabeth Hasselbeck on Wednesday.

The co-hosts got into their most heated debate yet when O'Donnell chided Hasselbeck for not defending her when reports that Rosie had called U.S. troops terrorists first surfaced. The six-minute match prompted producers to use split screen and left Joy Bahar begging for a commercial. Who won? Depends on who you ask.

"What you did was not defend me. ... I asked you if you believed what the Republican pundits were saying, you said nothing, and that's cowardly," O'Donnell said.

"Do not call me a coward, because No. 1, I sit here every single day, open my heart and tell people what I believe," Hasselbeck fired back.

It was one of the last debates of O'Donnell's short tenure on the talk show. She leaves in three weeks, and there are whispers that she may bust out even sooner.

David Hasselhoff scored a point in the ongoing divorce battle with his wife, Pamela Bach. On Monday, a judge said that the actor would be allowed to visit his two daughters. The actor's visiting rights had reportedly been suspended after a video shot by his daughter showed him intoxicated while scarfing down a hamburger - it spread like wildfire on the Internet.

It seems as though Paris Hilton has finally thrown in the towel and faced the fact that she's going to jail. Her lawyers told the court this week that the heiress was abandoning her appeal.

A court spokesperson told the Associated Press that Hilton will likely spent 23 days in jail, if she is on her best behavior. Her sentence begins June 5.

"The Coast of Utopia" and "Spring Awakening" won honors at the Drama Desk awards this week. "Utopia," starring Martha Plimpton and Ethan Hawke, walked away with a leading seven awards. The prizes bring some folks that much closer to Tony, which are awarded June 10.

This week many filmmakers set their sights on the highest prize for films competing at the Cannes Film Festival for the prestigious Palm d'Or. A slew of stars, including Brangelina, Martin Scorsese and Jude Law, descended upon the French Riviera to take part in the festivities.