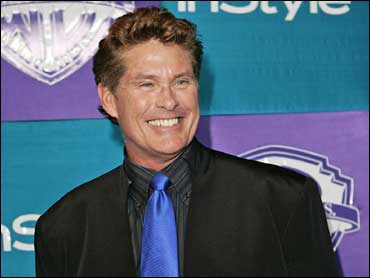 A judge has restored David Hasselhoff's right to visit his two teenage daughters after that access was suspended over a videotape showing the recovering alcoholic apparently intoxicated, an attorney for the actor said Monday.

Lawyer Melvin Goldsman made the disclosure before the start of a closed-door court hearing concerning the videotape and related issues.

Hasselhoff, 54, and his former wife, Pamela Bach, 43, both attended the hearing but neither provided details after it ended.

"It went very well, the truth was told, and I can't say any more," Hasselhoff said outside court.

Goldsman said the suspension order had been lifted Friday after being implemented on May 7 by Superior Court Judge Mark Juhas. The two-week suspension had been set to expire Monday.

Portions of the video that aired on syndicated entertainment shows showed Hasselhoff, wearing only blue jeans, lying on a floor and clumsily eating a hamburger while one of his daughters scolds him about his drinking.

On Friday, Opri's publicist, James Levesque, said the judge was scheduled to review Hasselhoff's fitness to visit the two girls, Bach's requests for increased spousal and child support, and the possible need for the former "Baywatch" star to enter alcohol rehabilitation.

Opri had asked that Hasselhoff be barred from visiting 16-year-old Hayley and 14-year-old Taylor until June 1.

Juhas had also said on May 7 that he wanted to find out how long ago the videotape was made. Opri said it was taken in late April.

The judge also wanted Hasselhoff, Bach and their daughters to meet with a psychologist to evaluate custody and visitation arrangements.

Hasselhoff and Bach have been arguing over child and spousal support for months. They were married in December 1989. They were divorced last year.

Hasselhoff had been living in Nevada while appearing in the Las Vegas production of "The Producers."